La Vie Velominatus. It is the life we, as Velominati, lead. It is life as a disciple of cycling, of the greater meaning the bike holds and the lessons it teaches us. Along the path, one of our great duties is the wholesale consumption of the great Works related to our sport. From periodicals to books to films, herin lies the list of works considered to be necessary reading and viewing for any Velominatus who wishes to further understand our craft.

All works in this list have been read or viewed by The Keepers or have been recommended by one of our community members; if it is included herein, you can be certain that The Work speaks to the greater meaning of La Vie Velominatus that we pursue. Please feel free to add your own recommendations and we will make sure to update the list as we become aware of more great Works. 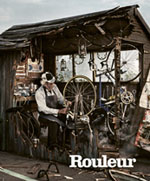 While pricey by periodical standards, Rouleur is also immaculately curated and written; the entire Rouleur project is founded on everything that makes a velominatus what we are. From guest articles by the likes of Robert Millar, to interviews with Chris Boardman on the selection of Royce hubs for his Hour Record attempt, to a two-part series on how to properly select and mount your tubular tires.

Rouleur is an absolute must-read for any Velominatus. 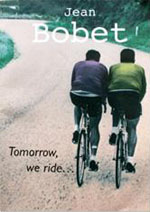 Perhaps the single most inspirational work on what it means to love the bicycle, Jean Bobet takes us on a journey of life as a scholar and professional cyclist alongside his famous brother, Louison, who won the Tour de France three times. It is a book about his life as a cyclist and a passion for cycling that goes beyond careers and racing results. In some places historical, in others touching, while in others is downright funny. But mostly, it’s about a love for a cycling life. 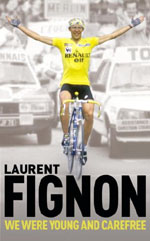 We Were Young and Carefree
Laurent Fignon

The late and honored Professeur writes an amazing memoir of his life as a professional cyclist. Unapologetic and brutally honest, this book takes us through the highest high and lowest lows of a career better remembered for losing the Tour by eight seconds than he is for winning it twice. The pages are lined with unforgettable anecdotes, from racing bikes alongside The Badger and Greg LeMond, to mentoring the great Gianni Bugno, to the befuddlement of the Old Guard as EPO entered the peloton in the early nineties. 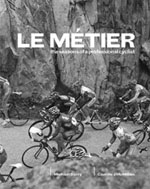 Le Métier (the craft) is something just this side of an addiction. Barry beautifully describes the struggle and agony inherent in professional cycling; he portrays a miserable existence, saved only by the fact that these select few are permitted to make a living doing something they love, even if le métier is a far cry from what drew them to the sport in the first place.
*Synopsis by Steampunk. 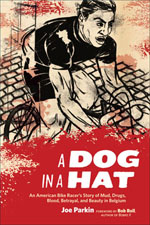 A Dog in a Hat
Joe Parkin

While it covers the same subject matter as Rough Ride – of a young neo-pro learning the ropes of the peloton, including the dark depths of drug use – A Dog in a Hat is an uplifting tale by a rider clearly in love with the sport and everything that comes with it. With none of the bitterness of the story of Rough Ride, Joe Parkin acquaints us with life as a professional in Belgium with grace, humor, and, above all, honesty. 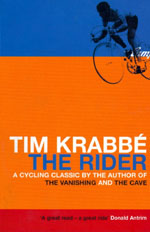 Lauded Dutch writer Krabbe intimately captures the essence of the road racer, his hardship, pain and joy, laid bare on the roads of the Tour du Mont Aigual. 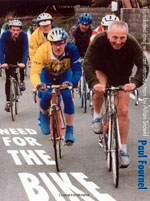 Need for the Bike
Paul Fournel

While the cover and the pages within contain various Rule violations, the passion and attention to the little things that make a Velominatus can’t be ignored. The book consists of short passages, each discussing a different, fundamental aspect of cycling. Not about racing, this book is about passion for the sport at a recreational level. 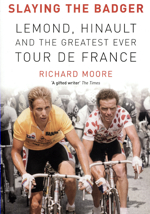 The easy-going, trusting, and entitled personality of Greg LeMond clashed with the brash, take-what-you-can, aggressive personality of Bernard Hinault during the 1986 Tour de France, resulting in one of the greatest editions of the race. The race was fought not only on the roads of France, but through a psychological battle that was sparked not just in 1985 as is widely accepted, but the day the two met on the Renault team in the winter of 1980/1981.

Simply stunning is this book. If you have a soft spot for L’Enfer du Nord, you must own this. You can almost taste the mud in your teeth and feel the pain in your bones as the riders rattle over the stones. As much a great history of the race as it is visually striking. A tribute fit for the Queen. 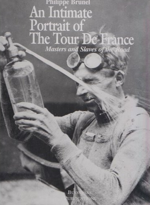 Intimate Portrait of the Tour De France: Masters and Slaves of the Road
Philippe Brunel

The photos in this book will draw you in, but eventually you’re bound to discover that the pages of this immaculate work are filled with reverent prose  that can be read and re-read. The book covers many of the greatest legends of our sport both on and off the bike and contains some of the most recognizable photos of our sport. It appears out of print, but is still available on the second-hand market. 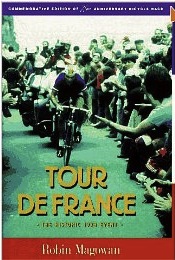 This what happens when you put a real writer in a following car. Robin Magowan is an excellent writer of prose and poetry and he records one Tour de France from the road, not from a press room. This is the Tour of Thevenet and Maertens, it’s the post-Merckx era. I have a copy to loan but owning this would be a wise investment. It’s excellent. 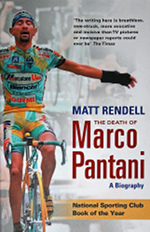 Fans of Il Pirata may have a hard time reading this studiously researched and compelling biography of one of the legends of our sport. It paints no pretty pictures and dons no kid gloves as it chronicles Marco’s life in detail. Nor does it serve as a muckraking exposé into the rise and fall of this great athlete. Rendell’s work serves as, what The Independent aptly called, an ambivalent tribute. From his upbringing in Cesenatico, to his first races as a promising youth rider, to his storied 1998 season, to his descent into addiction and self-loathing, Rendell captures the passion, athleticism, and complexities of Pantani’s too-short life. If you’re a fan of Il Pirata who is hesitant to read this book for fear of your Pantani bubble being burst, we challenge you to read it anyway. The Keeper who wrote this review came away with an even deeper appreciation, respect, and compassion for the man in spite of having to read about some of the darkest places a Cyclist can go.

There is no more photogenic sport than cycling. A big call, yes, but one that is supported by the consistently stunning examples offered every year by Rouleur Magazine’s Photo Annual. And of course, their fine writers aren’t entirely forgotten, with typically verbose text accompanying each photographer’s contibution. 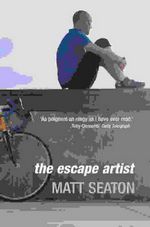 “A beautifully written book which depicts the struggle between a fulfilling home life and a satisfying bike life. Seaton manages to describe the skill, drama, speed and pain of cycle racing as well as giving the book a very personal feel.”    *Synopsis by Dexter.

Many of us had our first introduction to The Craft through Greg LeMond’s Complete Book of Cycling. But where did LeMan acquire his wisdom? Possibly from The Badger himself. Bernard gives the fundamentals on how to destroy opponents as well as properly adjust the seatpost.

Beautifully translated from French, the Cyclist is frequently referred to as “the organism”. Sadly, there is no chapter on punching out French protesters who dare to block a race course.
*Synopsis by @fignon’s barber. 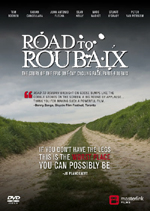 This film holds an important place in every Velominatus’ Roubaix Sunday Ritual, which should include riding over the worst roads in your neighborhood, watching the race, and watching this movie.

This film is not a race video; this film is a tribute to everything that is beautiful and brutal about the Spring Classics. The incredible cinematography is paired to rider interviews so intimate, you simultaneously worship and pity these hard men. An absolute must-see for any rider who loves the classics. 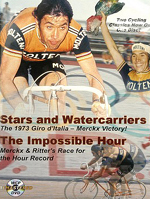 This is a double-feature DVD containing two classics, Stars and Watercarriers and The Impossible Hour. Both narrated by the Dane Jørgen Leth, these films are an entirely unique take on this amazing sport of ours. The scenes of the riders carrying out their work and preparing for races are the stuff that inspire us to enter La Vie Velominatus. Stars and Watercarriers takes us through the Giro d’Italia where Merckx dominates the race, and The Impossible Hour covers Ole Ritter’s attempt to reclaim the Hour held by Merckx. 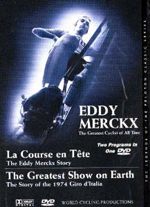 La Course en Tete is perhaps the most iconic cycling film of all time; anyone wishing to better know The Cannibal is obliged to start here. Following him at the height of his career, this film reflects the man training, at the table with his family, and dominating races. No other rider compares to The Prophet, and no other film is a more suitable reflection of his career.

The Greatest Show on Earth shows us why the Giro is better than the Tour, as we follow Merckx through the ’74 edition, which he struggled to win by a mere 12 seconds. 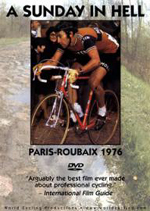 A Sunday in Hell
Jørgen Leth

Another classic Leth work, this film moves at a pace that dramatically contrasts the chaos of the race itself. A Sunday in Hell documents what it takes to race the hardest of the classics by following the hardest of the hardmen during the golden era of the race: Merckx, de Vlaeminck, and Marten.

Only Leth would include the scenes for the Velominatus such as the one at the neutralized zone where Merckx borrows a rival team’s spanner to adjust his saddle a trifle. 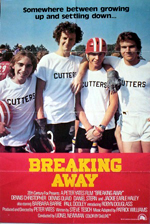 This is easily one of the greatest ‘Hollywood’ films featuring cycling. Even other cyclists who may not have heard of the 1979 Oscar winner for Best Screenplay seem perplexed and unable to grasp the concept of a teen coming-of-age film featuring that rarity of Hollywood filmdom, a *gasp* cyclist.

And that’s all that Breaking Away is. It’s not a cycling film, not a fly-on-the-wall doco like A Sunday In Hell or Hell On Wheels. In fact it’s completely bereft of hell in any form. It’s heaven, sometimes on wheels, sometimes in Mike’s Buick, sometimes in the swimming hole at the old abandoned limestone quarry. 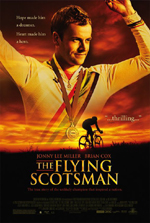 Graeme Obree holds a hallowed place in cycling, this film puts into sharp relief what kind of personality it takes to turn the entire world of cycling on it’s head and claim one of the most honored and difficult records in our sport.

This film is based on Obree’s autobiography. Unlike most other films made from books; Obree himself was involved in this project and even built a replica of his the bike he had built to carry his inventive aerodynamic position. This tale is tragic and triumphant all at once. It also demonstrates that Scottish is basically it’s own language; American’s will need to pour themselves an ale in order to have any hope of understanding the dialog. 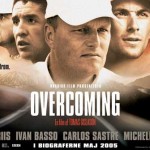 “Unlike the recent HTC-Columbia feature-length advert, Overcoming truly gives the feeling of life in a Pro Team. It’s also the only film (of a genre) where the extras are as good as the movie, and it only serves to make us love Jens even more (if that were possible!).”