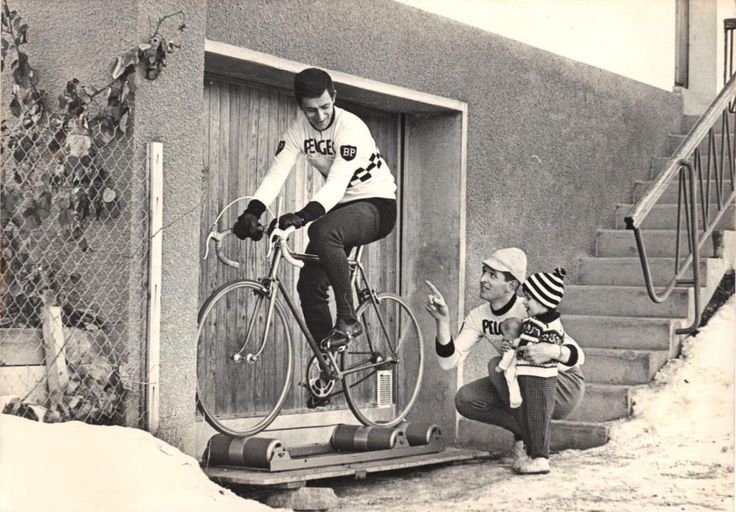 When it comes to training, no one loves riding outside and loathes riding inside more than I do. On the other hand, riding outside is dangerous, especially with something like the Tour de Trump running the show. So I’ve been working on my road safety by not riding on the road and riding my rollers instead.

The added benefit of the rollers is that I do it in the early hours of the day, when no one is stirring apart from the odd mouse, so there are no witnesses. No one wants to see a shirtless man crying. Not even a mouse.

The rollers are the quintessential winter training and warm-up device. Merckx rode them. I was going to list other people who rode them but then realized that the list is as complete as it needs to be with just that name on it. I’d never ridden them until last Spring, when Marko sent me his, saying I could have “those diabolical bastards”. I rode them on my road bike until it got light enough to accommodate morning rides outside which was twice. Then I forgot about them until we fell back again a few weeks ago. (Daylight Savings? More like Daylight Shavings.)

With the days getting short and my gut getting wide, I’ve turned once again to the rollers for my morning Spanish Turbo Sessions. Except this Fall, I’ve been riding my Don Walker track bike (which was here until ridden only for the Festum Prophetae Hour) which adds the benefit of an unforgiving fixed wheel to the fun of riding these torture devices.

On the plus side, nothing will give you a more Magnificent Stroke than this heinous combination will. Thirty minutes feels like a lifetime; forty-five like an eternity. I’ll let you know what fifty minutes feels like when I get there. At which point, much like with The Hour, I’ll no doubt climb off, citing road conditions.