Notes from Post-Apocalyptica: A Beer in the Bidon Field Test Update (from Phoenix) 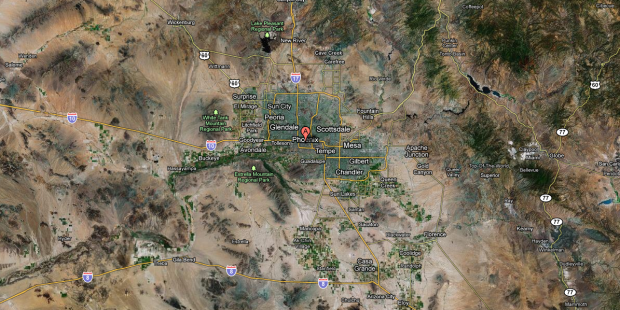 I did not expect the test to go well.  To begin with, no beer holds up well at 96 degrees, and the Fahrenheit mercury outside of the light rail station at Arizona State University in Tempe read 96 degrees.  96 degrees stands far too close to 98.6 degrees, familiar to us all as body temperature, but also (and by association) the temperature of urine.  A bad omen for beer.  Worse still, a thousand miles south of the persistent snows of a long Montana winter that kept me mostly off the bike and on the trainer for the better part of five months””and fresh out of two days in the overly air-conditioned conference rooms of the Wyndham Hotel””I really only had one unfortunate choice of beverage for my impromptu spin through the post-apocalyptic suburban landscapes of metropolitan Phoenix.  Cheap, humorless, and sharp-tongued, red in can but dark black in its miserable, acrid soul. Tecate. El Diablo en el bidÃ³n.

It was with some mixture of amusement, awe, and incredulity that I watched Steampunk watch me discretely pour this suspicious golden liquid into my new two-dollar University Bikes water bottle on the hot, black asphalt of Arizona’s urban/suburban desert.  Not long ago, and for very good reasons, this quiet voice and persistent respectful critic of the Keepers’ collective conscious revealed his real life identity as Environmental Historian and Professor Michael Egan.  What he did not reveal is that in our professional field, Michael Egan is a big deal.  Prize-winning book on Barry Commoner.  Planning committee for big meetings.  Editor of an important upcoming book series.  Leather bound tomes.  Elbow patches.  Etcetera.  And here we were, rental bikes, running shoes (Birkenstocks, Egan?  Really?), Herbert helmets, and me in full V Kit, sneakily testing shitty beer on what was bound to be a shitty urban mess of a ride on a stinking hot day in greater Phoenix in April.

Phoenix proper may be the seventh circle of hell, right here in modern America. Full of conference centers and chain fast food restaurants, the roads are wide and straight but broken by endless stoplights, filled with SUVs with drivers who will yell at you to ride on the sidewalk, and littered with a show-stopping mélange of glass shards, nails, and tire staples that make their shoulders and few bike lanes a treacherous joke.  It is not a city for riding.

Outside of Phoenix””in Tempe, Scottsdale, and Glendale””the dust-swept concrete wastes of Phoenix’s seemingly abandoned post-modern urbania give way to neat rows of plastic suburbs, dotted by well-watered golf courses, fake lakes, and shopping centers stretching out as far as the eye can see.  It was through this modernity-scrubbed suburbia of post-apocalyptic Phoenix, over multi-use cement pathways through fenced-off parks and manicured links, that Steampunk and I set out to steal a mid-afternoon ride in the mid-afternoon sun, me with an ever-warming mid-afternoon cerveza.

And then it happened, like it always does.  Six or eight kilometers went by.  Traffic, smelly effluent flowing through the artificial river, frequent stops, bad drivers, frustration.  Then four or five more kilometers, and the slowly undulating bike path began to give into the rhythm of the stroke.  Steampunk settled in on my wheel and I began to lean into corners and smooth out the golf-course rollers with small bursts of V applied through dancing feet over an ever-softening saddle.  An impenetrable slalom course of strollers thinned out into a periodic series of predicable obstacles, and dogs on leashes seemed to begin pulling their owners off the path on our approach.  Then ten more kilometers, the pistons firing, full Belgian time trial position a la Faboo, and we were cruising.  At 40kph, we took the desert by surprise, exposing snakes and lizards and rabbits and rodents, all hiding in a second natural landscape within the white-washed modernity, but attuned to the speed of golf-carts, unprepared for the rolleurs of post-apocalyptica, sneaking up at the speed of awesome, powered by a mix of pure joy and warm salty sips of the newest addition to the Beer in the Bidon elixirs of choice.

There is a lesson for me in Phoenix. It is not that Phoenix is cool; it’s not. Sure, the hybrid landscapes of Tempe and Scottsdale may represent the ultimate in the kind of unexpected human/nature complexity that we environmental historians trade in, but am I going to trade it for Montana?  No fucking way.

Nor is it that I like Tecate: I don’t. I was actually quite impressed with its performance on the bike, and it may be a hot weather favorite (see below), but it’s still crappy beer that should never be passed as anything else.

But Phoenix provides an abject lesson in what makes the Rules, the Lexicon, the Keeping of the Cog, and even the V that holds it all together all worthwhile.  It’s not the first time I’ve learned the lesson, nor, I’m sure, will it be the last. But it is the most important lesson in all of cycling.

And that lesson is this: riding bikes is fun.  A lot of fun.  Just about anywhere.  Even in Phoenix.  Shitty bike?  Doesn’t matter.  Terrible beer?  Don’t care.  Lots of traffic, crappy weather, don’t have the right clothes, think you might be breaking a Rule?  Yeah, whatever.  Going for a ride is always a good choice.  Find a bike.  Find a road.  Get bike to road.  Go ride.

Pros: High sodium content is good for hot, dry, weather; it was the first Mexican beer to market itself as a beer to be served with salt and lime…so you can put a lime in it, you wienie.

Comments: Tecate far surpassed my expectations as a beer for the bidon, and it now stands as a high temperature front-runner in dry conditions.  Don’t get me wrong, it’s still shitty beer.  It has a couple of key redeeming qualities, however.  Cold, it provides the thirst-quenching refreshment of a light beer.  The big surprise was when it got warm.  I actually put two cold Tecates into a single bidon to help slow the warming process with the intention of only drinking half the beer, but as it warmed up, it was the beer’s saltiness rather than it’s piss-like flavor that really shined through, and at 96º and less than 10% humidity, saltiness is what I craved.  Granted, you pay a hydration price for the sodium and alcohol””it’s not a beer for long rides””and Tecate’s intimidation factor is extremely low.  But for the dry, hot, ridiculousness of the suburban desert Southwest, there really is no other choice.

38 Replies to “Notes from Post-Apocalyptica: A Beer in the Bidon Field Test Update (from Phoenix)”