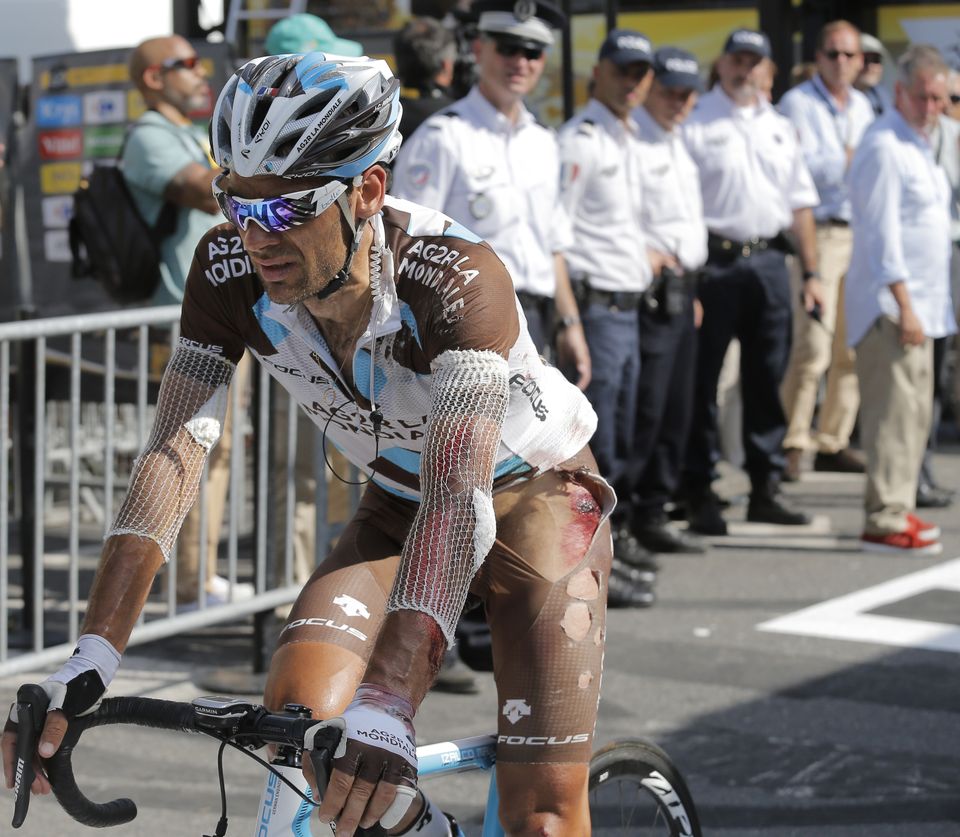 Waking up the morning after a crash is a feeling that can only be understood by someone who has woken up the morning after a crash. The wounds will have kept you up much of the night, not being able to sleep on one side (or both), which is somehow always your favorite side to sleep on. The lack of movement overnight will mean that the wounds themselves are tight and sore, and the force of the impact will have the result that you know the precise location of every organ within your torso.

Men don’t like to act like they’ve been hurt, unless they’re in a long-term relationship, in which case they will pretend anything hurts so long as no one aside from their partner is around. Under these same circumstances, they are highly susceptible to debilitating cases of Man Flu which require loads of coddling, soup, and beer in order to cure. Outside these two extenuating circumstances, we jump up from any accident and pretend nothing happened, like Inspector Clouseau. Pro Cyclists epitomize that spirit to the maximum, frequently coming off at speed, removing loads of skin, and hopping back onto their bicycles as if nothing happened.

Geraint Thomas, possibly the most Rule Compliant rider in the modern Peloton, epitomized that today with his crash:

Barguil just wiped me out. It was a tight right and he just came around on the inside and knocked me straight off the road. I got back up and started chasing.

Which is also the same thing he did when he got blown off the road in Gent-Wevelgem. Except this time he head-butted a telephone pole and highsided into a ravine first. The race doctor apparently asked him his name to test him for a concussion and he answered with, “Chris Froome.”

JC Peraud came off alone a few days back, for no reason that anyone can articulate other than, “a touch of wheels”, which is what we say whenever we crash for no reason, even when riding alone. He came off at speed, on some of the roughest tarmac imaginable. He was skinned alive, effectively. And, as with Geraint, he got up and not only finished the stage, but rejoined the field. Double stud with a side of Steak Tartare.

Crashing is part of life as a Cyclist. We risk life, limb, and skin. We fall off, we climb back on. Crashing is learned; we know how to fall to minimize “important” damage. “He didn’t crash right,” we say, as if there were a mysterious way to crash right.

We don’t talk about crashing because as a Cyclist, if follows us everywhere we go. It is always there behind us, like the shadow we feel on the backs of our necks when we come up the basement stairs.

Talking about it only makes it real, and crashing is already as real as it needs to be.