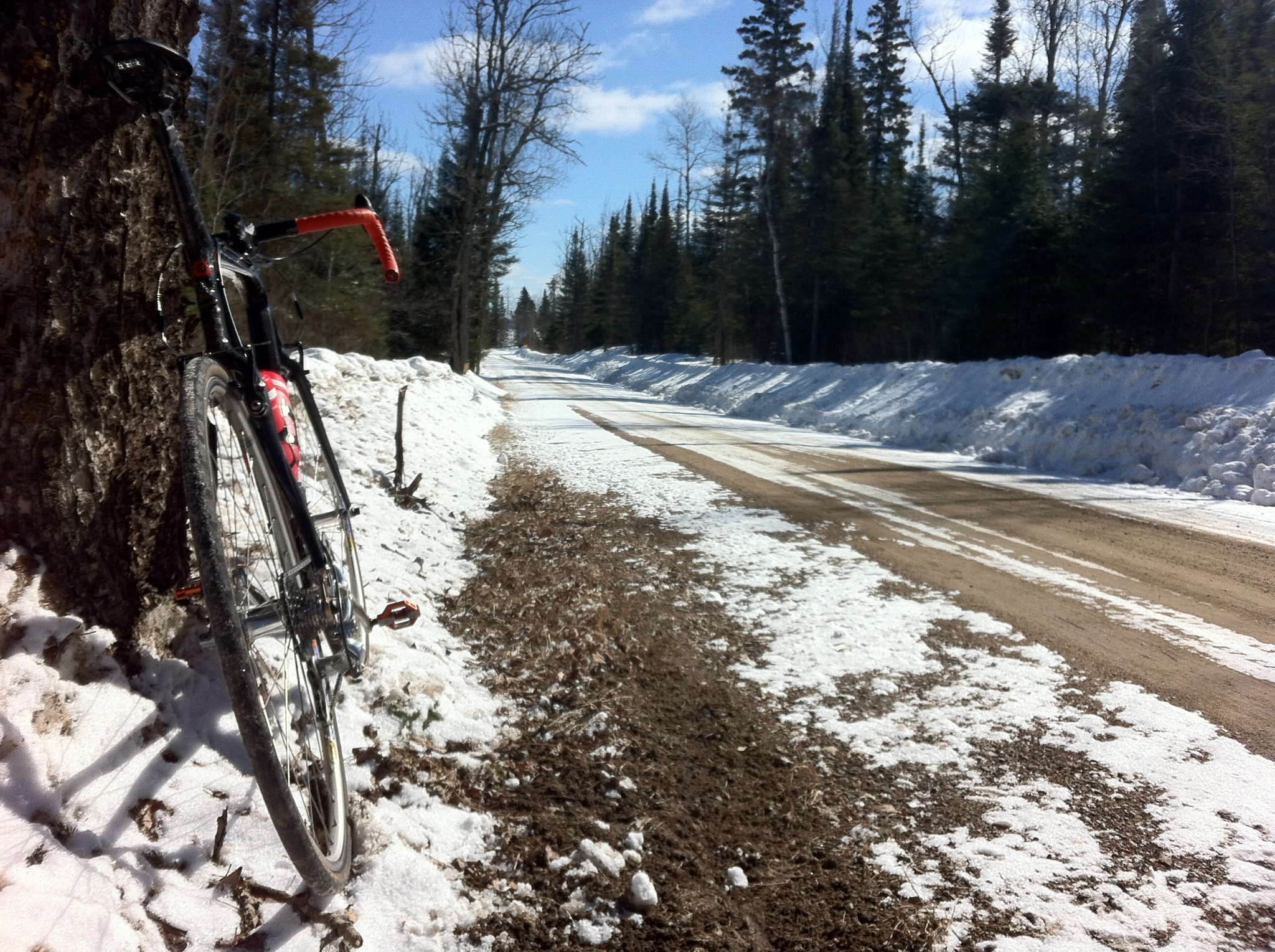 I just got turned back from a ride. 5k from the house I realized my bits were getting too cold not only for comfort (in which case, apply Rule #5 and move on) but safety (i’ll take my vasectomy in the hospital, thank you very much). It’s a lovely sunny day, the only problems being the minus 12C temp, biting headwind, and leg warmers that stop mid-thigh. Having to pull the plug on a ride is a bummer. Thankfully, it doesn’t happen all too often and I’ve still got the rollers set up in the house. But the silver lining here is that it was only my 4th or 5th training ride of the year for the Heck of the North which is still 7 months away.

Some would say gravel riding is here to stay. Others would say gravel riding has always been a part of cycling and all we’re doing now is applying intention to it. It’s undeniable though that the gravel scene has taken on a prominent role in cycling of late. From open-registration races all over the world to the Strade Bianche, graveling has ignited a passion in many of us. Riding dirt roads has a certain unique aesthetic, an aesthetic that is best described as taking place on the margins.

The tarmac, as we move further from the center of town, gives way increasingly to gravel. As the rider begins to stitch together longer gravel stretches of road he needs to go further out on the margin of the city until finally, any reminders of the city are gone. This is where the margin is blurred between “civilization” and “wilderness”. The Graveur’s bike is marginally a road bike. Road bikes can be fitted with wider tires but are limited by frame and fork design as well as clearance at the caliper. Cyclocross bikes can run with skinny tires which is usually preferred and then we’re left often with a higher BB, heavier bike, and a position that’s closer to sit up and beg. Only just recently have bicycle companies begun to manufacture equipment intended specifically for the booming gravel scene. But even still, the rider has to select a hodge-podge of gear from road, cross, and even MTB that will suit his needs and the particulars of the course.

This year, I’m experimenting with new bars. I’ve decided to give the Salsa Cowbell a spin. Maybe you’ve seen bars like this on Randoneur and drop-bar 29er’s common in the adventure bike and UltraCX scene. I’m trying to achieve a few things with these flared bars: flat hood-to-top area while maintaining horizontal drop, more upright position with a shallow drop, lot’s of drop for secure grip, and leverage provided by wider-than-Lampre-Man 46mm span. Gianni recently referred to the geographically curated bike as a “Terroir Bike”. I like this turn of phrase.

Toeing up to the start of a gravel race can result in sensory overload of Rule-breaking gauche.  Riders operating on the margins of The Rules show up with frame bags and EPMS’s, Camelbaks, zero saddle/stem drop, facial hair, MTB shoes, and even aero bars. The list goes on of Rule violations. Be mindful though that Rules are often bent consciously and  broken for geography, practicality and self-reliance. The most Rule compliant of Velominati on the road may seemingly be found out on the margins of decorum riding gravel. Don’t be too quick to judge.

It is the margins that attracted me to gravel riding and is partly what keeps me excited about it. For one, I have little choice in terms of the roads I have to ride. I live on a gravel road that mostly leads to other gravel roads. I’m closer to the margin of wilderness than civilization. Graveling is a necessity if I want more places to ride. Keeper status aside, I’ve always been one to eschew rules and authority and go against the grain. Gravel riding allows me a damn good reason to blur the Rules from time to time to see what works. Here are a few Rules worth breaking when it comes to gravel road riding:

96 Replies to “Le Graveur: The Margins”