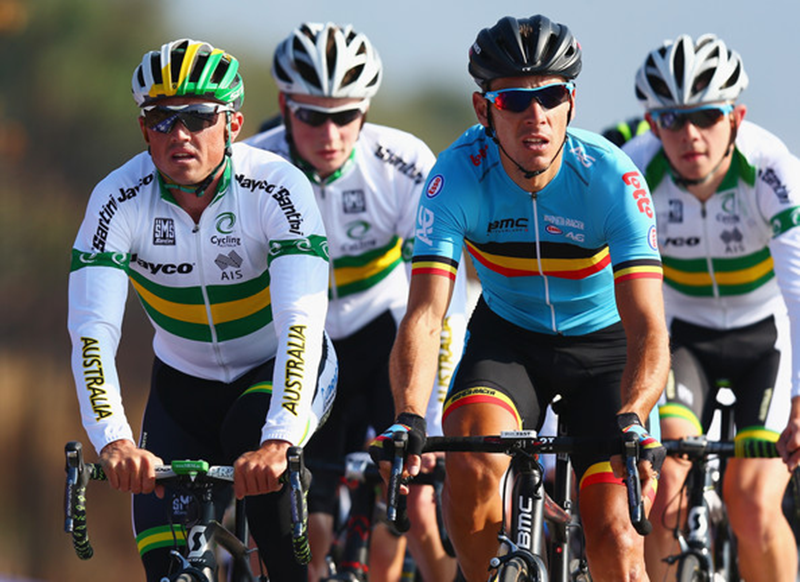 Team USA: Doomed From The Start

The Road Cycling World Championships are on our doorstep. The USA is hosting, which makes me nervous immediately. How can we fuck this up? Ask Taylor Phinney for starters. This event has not been hosted by the USA since Moreno Argentin won in Colorado almost thirty years ago. We just don’t have the experience to pull off cycling events of this importance. The police are used to impeding cyclists, not protecting them.

But the Americans can’t win either the women’s or men’s road races simply because of the awful kit they have to wear. All V will be drained by the lameness of the jersey. The Rainbow Jersey would refuse to even slip on over such an abomination. Back in the day, Greg LeMan wore the Captain America jersey and won the World Championship at age 22. Going into the worlds as Captain America is a lot more powerful than whatever the hell this new design is. FFS, give these riders a chance. Representing your country in the World Championship should be a highlight of any cyclist’s career.

The Belgians, the Aussies, the Italians, The French: they all have jerseys that say we are here as a select, badass team and we are going to fuck you up. The American’s look like a trade team for a car dealership. It hurts. The Spanish might be in trouble too by the look of last year’s design and the fact they generally refuse to work at crunch time.

84 Replies to “Team USA: Doomed From The Start”