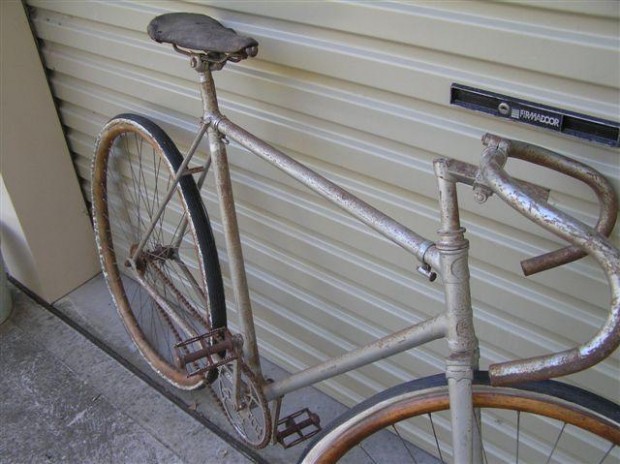 We, as cyclists, as Velominati, may share a common passion, yet invariably have our roots planted in differing turf.  Some may be late bloomers, coming to flower in our adult years, when we decide that a sedentary lifestyle, an expanding waistline or the realisation cycling is indeed more than just a sport or an activity, but a more spiritual experience than we ever were presented by ball sports or running or heaving lumps of iron into the air.  Others, like me, have seemingly been enveloped in ‘la vie Velominatus’ for as long as our memories reach back.

My father Brian was never a cyclist, and while I’ve spent my life on two wheels, he has spent his as an artisan of other forms, using his hands, eyes and that part of the brain which triggers an appreciation for beauty, to collect and restore old furniture, cars, and even motorcycles.  Where most see a paint-covered chest of drawers, or a rusting, flat-tyred relic, he sees the true identity, the former glory, and brings that back to life, and only then can others see what he had already envisioned before taking paint stripper, emery and French Polish to recreate a classic.

While growing up, through my life of bikes, there was always one bike ever-present, always there or thereabouts, yet one that was never ridden by me, or anyone else, never a pedal turned or a bar gripped.  Forty-odd years, and all I ever knew this bike to do was just be there.  Hanging on the garage wall, not even a complete entity, just a frame, a couple of wheels, handlebars turned sideways, the rest of the parts in ice-cream containers sitting on a bench or inside the latest restoration project, some old cabinet or dresser.

It never really intrigued me too much, didn’t jump out at me and say ‘ride me’. It was just there, a little sad probably that all these other newer, shinier steeds were getting my attention, yet when they would eventually be deemed too small, too old, or too inappropriate to my needs, would be moved on to other homes, or retired, in pieces, forever.  But the old girl on the wall wasn’t going anywhere.  Maybe she knew her day would yet come, that there were to be glory days yet again. Just a few years ago, I saw some bikes of the same era, the same ilk, the same brand even, that had been restored and converted into fixed-gear bikes, using a smattering of modern parts on their aging frames.  The seed was planted in my mind that maybe I could give a new life to the old girl in a similar manner.

I floated the idea to Brian, who seemed to be accommodating to getting his old bike going again, but probably not in the way I had envisioned.  No, if it was going to be done, then it would be done by him, in the only way known by him;  back to its original condition and spec, right down to the paint colour, the decals, the lot. Parts were pulled from their ice-cream homes, the frame went off to his panel-beater mate, and parts which were either missing or too far gone to be used were replaced with as close to original that could be sourced.  The bike shops of Newcastle were scoured for bits that most of their employees probably hadn’t even heard of or knew existed.

While my old-school fixie vision was scuppered, Brian’s old-school revitalisation vision was clear and concise. It may have taken a couple of years and more money than the bike was ever worth even in its glory days, but the result is more than worthy of both sacrifices.  The bike has seen very little riding still, just a couple of trips down the driveway by myself, but that’s not the point.  It is a piece of cycling history, my father’s history, and now my own history, as I will keep this machine as long as I live, even if I may never have a son or daughter of my own to pass it on to.

The story of the bike is one that was recounted to me when I was a youngster, then probably forgotten for a long time before the latest incarnation prompted me to delve deeper into the process that brought it into my father’s, and now my, life.  In 1952, as an 11 year old boy living in the barren west of New South Wales, Brian asked his father if he could have a new bike, as the old hand-me-down he would ride to school, and around the property where they lived, was getting long in the tooth.  His father, my grandfather, made him an offer, a bet, that if Brian could ride the old bike the 18 kilometres from Boorandah to Gilgandra in less than an hour, then the shiny new Speedwell Roadster would be his.  18km/h may not seem much to us now, but for an 11 year old, on a too-big, single speed bike along a dusty, gravel road in 35-degree heat, it probably seemed like trying for the Hour Record would to me.

When Brian arrived at Creenaune’s Cycles, he was to get the proprietor to phone his father and confirm that he had indeed made the cut-off and earned the bike.  It must have seemed like winning a stage of the Tour, or having all his Christmases come at once. When the family moved from the outback to the coastal suburb of Belmont, the bike made the trip too, and would begin its term of inactivity.  And now, here it is, in all its glory.

The seed was planted, and a spate of ‘new’ old bikes started popping up in dad’s shed and under the house.  Some were kind of cool, like the Peugeot folding bike, while others were more mainstream and not deemed as worthy of a rebuild.  But one that came into his possession certainly did warrant an input of more time and coin.

This BSA track bike was sitting in his mate Jeff’s shed, and was bought for $40 (or maybe Jeff had bought it and passed it on).  A circa 1900 beauty, its standout feature are the Bayliss-Wiley wood rims, which I’m informed (and Dad knows his wood) is Slovenian beech wood.  These would be painstakingly hand stripped with window glass, and coated with seven coats of shellac. After having my former shop colleague Levi re-spoke them, they were still looking more like tacos than wheels, and would require three months under weights to get them in a condition that unfortunately won’t see them being ridden, but straight enough for display purposes.

Sourcing tyres for the wheels has been the bane of Brian’s existence though, their 28″/642 configuration impossible to find suitable rubber for.  There are more chunky versions, like those on the Speedwell available, but to keep thing authentic requires a narrower, smoother tread, which has been so far elusive.  The rims also look to me, and others, as if they could be tubulars; the originals were so so badly perished that it was difficult to tell if the tube and tyre were supposed to be bonded together or not.  If there are any tyre/wheel/old bike experts out there that can help, please get in touch.

As can be seen from the finished product, time, effort and an artisan’s touch have garnered outstanding results.