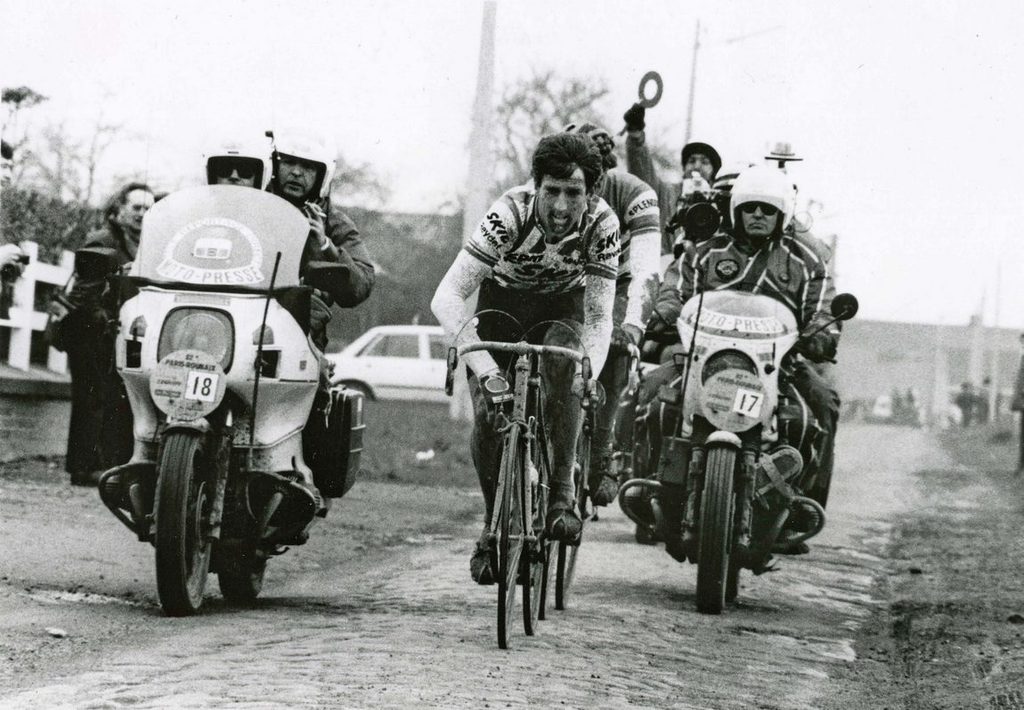 Roubaix is the biggest day of the year, as far as I’m concerned, because it is the proving ground of some of the greatest hardmen Cycling has ever known. And Sean Kelly fits that bill perfectly. This piece by @wiscot is a perfect primer for our upcoming book, The Hardmen, due out in the Commonwealth in June and the US in November.

If there was one race in the year that got the hearts of La Redoute executives a-flutter, it was Paris-Roubaix. The reason was simple: the mail order company was based in Roubaix and a win for the team would be the perfect combination of sporting and commercial success.

In 1984, as the classic dubbed the “Hell of the North” played out over 260 kilometers of smooth roads interspersed with 55 kilometers of bone-jarring and mud-covered cobblestones, the atmosphere in the La Redoute suite was increasingly jovial. Well refreshed with a sumptuous buffet within easy reach for the executives, there were two La Redoute riders in the lead as the race left the Wallers-Arenberg forest: the German Gregor Braun, and the Frenchman Alain Bondue. Although there were barely 100 kilometers raced and a very long way to go, visions of a one-two in the Roubaix velodrome seemed increasingly possible to the suits. No matter how the sprint turned out, the blue, white, and green jerseys with LaRedoute emblazoned across the chest would be on the top two steps of the podium. The investment was paying off. Another round of drinks was summoned.

Eventually, the enthusiasm at this possibility settled down, the initial giddiness being gradually replaced by a quieter, more focused excitement as the number of kilometers to the velodrome decreased. Could the two riders actually do it? Would they actually do it? As they stared at the grainy, flickering footage on the TV, the minds of the marketing department were whirring at the public relations coup this could be. Meanwhile, out on the road, Braun and Bondue were working smoothly together as section after section of smooth roads and pavé rattled their bikes and bones. It had rained the previous day and the cobblestones were treacherously slippery with watery mud and puddles that hid who-knew-what. One lapse of concentration, one slip, or a puncture could ruin a long day’s work. Each rider took turns at the front, calmly and methodically inching towards Roubaix. The “Hell of the North” was theirs to lose.

Braun and Bondue were a good match. Both big men, they rode steel Motobecane bikes equipped with bar-end shifters. They were riders of pedigree. The German was mostly a track rider, having won the individual (and team) pursuit gold medals at the 1976 Olympics, but was good on the road too – in 1982 he had finished on the podium of both Paris-Roubaix and the Amstel Gold. His French partner Alain Bondue won the silver medal in the individual pursuit at the 1980 Moscow Olympics and had been individual pursuit world champion in 1981 in Brno and again in 1982 in Leicester. Strong, smooth and powerful as individuals, they were equally so as a duo. The executives had every reason to maintain their optimism.

Barring some unfortunate accident or freakish mechanical misfortune, the odds of a La Redoute one-two shortened in direct relation to the proximity to Roubaix. Nevertheless, this was Paris-Roubaix and the cobbles were particularly slick this time around, so optimism had to be tempered with, if not pessimism, then at least unspoken dread that a slip and fall would occur.

With 80 kilometers to go, Irish rider Sean Kelly, riding on an aluminum Vitus frame for Skil-Sem, was straining at the leash, getting itchy and impatient. He was feeling good and wanted to go after the German and Frenchman. His wise and wily Directeur Sportif, Jean de Gribaldy, advised caution and restraint. However, with 45 kilometers to go, Kelly could wait no longer and slipped off the front joined shortly thereafter by the hulking figure of the Belgian rider Rudy Rogiers. The La Redoute pair had a lead of almost two minutes but slowly, inexorably, the gap shrank, mostly thanks to the efforts of Kelly who looked for some help and shelter from the lanky Belgian who took the lead on the smooth sections while Kelly led on the pave. Rogiers was a domestique for Kelly’s former Splendor team, but past camaraderie was just that as Kelly realized his companion was either unwilling, or unable, to contribute to the chase, so he kept moving to the front, doing the lion’s share of the work. This was an inspired Kelly, one with a new confidence forged by his Tour of Lombardy win six months before. Kelly, the farmer’s son, was no stranger to hard work and mud, and could sense the win was possible, with or without help.

The expectant executives were almost silent now, grimly staring at the television screen as the once impressive gap dwindled away to nothing. Still, they consoled themselves, two riders out of four still gave them good odds at a victory, and Kelly was doing almost all the work, surely sapping his fearsome sprint.

The difference in vitality between the two pairs was made clear when Kelly and Rogiers caught Braun and Bondue with a mere 20 kilometers to go. While Kelly had been the dominant force in his duo, Braun had clearly been the weak link in the La Redoute pairing and was dropped like a spent shell casing from a double-barreled shotgun. Then there were three: Kelly, Rogiers, and Bondue, with the latter being literally and figuratively the biggest threat to the relatively diminutive Irishman.

Kelly had been professional since 1977 and had been getting better and better results with each passing year. The fall of 1983 had finally seen him join the ranks of being a “big rider” when he won a thrilling mass sprint in Como to win the Tour of Lombardy, beating Francesco Moser, Adri van der Poel, Hennie Kuiper and world champion Greg LeMond. The Kelly that appeared on the start line in 1984 was a rider who now knew he could compete, and win, against the best. He had ridden Paris-Roubaix multiple times and while he didn’t hate the race, he knew others did and that, combined with his strength and bike handling skills, gave him a double advantage psychologically and physically.

Suddenly, with around five kilometers to go, the trio was a duo as Bondue fell victim to a particularly slippery section at Camphin-en-Pevele and tumbled to the pavé. Instantly surrounded by well-meaning fans eager to help him get back on his bike, the seconds ticked by as Kelly and Rogiers barely looked back, their attention focused only on the road ahead. The Frenchman remounted and, in his supremely aerodynamic position, applied his legendary pursuiting powers in a desperate effort to close the gap, but it was for naught, and despite a heroic effort, it proved unbridgeable.

As Kelly and Rogiers navigated the twisting run-in to the Roubaix velodrome, the instructions from De Gribaldy were blunt, “Whatever you do, don’t mess this up.” Even though Kelly knew that Rogiers, a journeyman pro, couldn’t (or wouldn’t) contest the sprint as a matter of ability (or professional courtesy), Kelly was desperate to win the sprint and record his second monument victory in six months. Constantly looking over his shoulder in case the hard-charging Bondue had worked a miracle, the Irishman fiddled with his gears, wanting to ensure they were not clogged with mud. The Belgian put in a token effort, leading most of the last lap, but was swept aside by a clearly nervous Kelly, who elatedly crossed the line first – seven-and-a-half hours after leaving Compiégne. It was another victory in what was to be a remarkable season that would ultimately rack up an astonishing 26 wins. It was the best result of Rogiers’ career. Bondue trailed in third, 36 seconds behind, having valiantly chased to the end, perhaps hoping upon hope that misfortune might befall his quarry and renew his chances. A shattered Braun, having been caught by Johan van de Velde, finished fifth, almost four minutes down on his French teammate. Of the 158 starters, only 42 were recorded as finishing, with Jos Haex finishing last, 33’53” behind Kelly.

By the time Kelly raised the iconic cobblestone trophy on the infield podium, the La Redoute executives were long gone, leaving behind a sad, chaotic remnant of a party that had promised so much, but delivered so little. Seven of their riders had finished, three in the top ten, but they only had third place to cheer about. After having had their hopes raised so high, that wasn’t much consolation. Maybe their Irishman, Stephen Roche, would do something in the Tour . . .