Rule 8: It’s Gotta Be The Shoes

What Gianni humbly omitted from his last article is that once he finishes ranting about sock color (actually, the lack of need for any color other than than white), he recovers quickly and we wrap up the Keepers executive board meeting with him tearing our legs off on the ride home from the bar with his magnificent stroke.  Because after all, he is Rule #72.

But I digress.  All the chit-chat Gianni’s article generated, and the timing of it with a new shoe purchase on my end, has me ruminating on Rule #8.   Matching saddle, handlebar tape, and tires is, for the Velominatus at least, quite the no-brainer as it were.  The only really poignant question I recall ever being raised is whether Vittoria Open Pave’s have an exemption because they are awesome and scream hardman tire (I think they are acceptable).

But what of shoes?  They are the one piece of kit that most often throws a rider’s coordination out of sync.  Of course this has traditionally been fine as shoes are such a personal matter that expecting one to match one’s shoes with the rest of one’s kit is hopeful at best.  That being said, I wonder if  shoes are less kit  and more equipment.  They transfer power directly from rider to bike and thus they are mechanical, they are engineered by smart people using fancy computers, and they render the machine virtually unrideable without them.  In fact, I’ve often wondered why retailers list them under “clothing” and why online review forums don’t put them under “drivetrain” instead of “clothing and accessories”.

So if you don’t accept my premise, at least humor me here.  If shoes are equipment and not kit, why would anyone buy a pair that didn’t match the rest of their bike?  Surely, with the abundance of shoe choices on the market these days I would think one could make every effort to find a pair that fits, has the features and performance characteristics sought, falls within price range, and matches the rest of the bike.

I happened upon this concept casually deliberately this week.  You see, I’ve been sporting considerable carbone over Fi’zi:k’s new shoe line ever since they were introduced (you might say I have a thing for shoes).  So when a new pair of R3’s fell into my lap for number 1 I was forced to shift the Yellow Princesses over to number 3.  The yellow decals and accents on the Serotta look awesome with the YP’s and the new R3’s are oh so sublime with the BMC. Splendid, indeed.

So I’ll put it to you, the Velominati. Does Rule #8 need amending?  Are shoes equipment and not clothing?  Do we, perhaps, need a new rule pertaining to shoe/bike matching (I think not but a suggestion might be in order).  These are the things that keep the Keepers up at night. 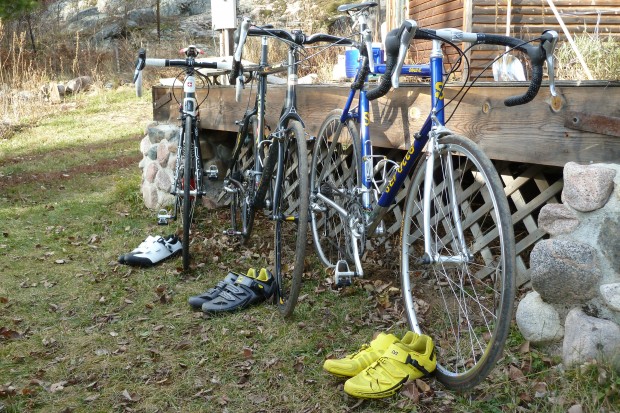