Anatomy of a Photo: Drifting Stones 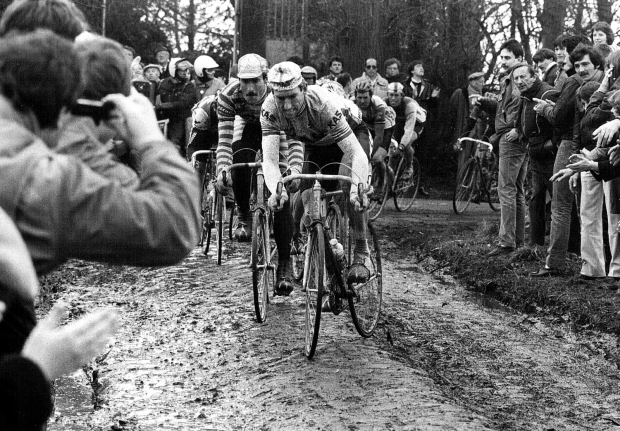 I would have put this under the new “Belgian Affirmations” category, but was overcome with fear that King Kelly would hunt me down and strangle me with his death stare for the crime of suggesting he wants to be anything other than Irish.

It is said that some people ride the cobbles with greater ease than the rest. It isn’t necessarily a skill that is learned; on the contrary, some simply ride with a lighter touch than others resulting in them going over the stones a few kilometers per hour faster. These are the riders who excel in the rain-addled editions of the Cobbled Classics. In the absence of evidence to the contrary, I have no choice but to assume I have this skill.

King Kelly, on the other hand, got so bored riding shit-slicked pavé that he decided to start doing tricks and stunts on his way to his second victory in Paris-Roubaix. A moment after this shot was taken, he popped a one-handed Lone Ranger, causing Urs Freuler’s mustache to grow three sizes in amazement before temporarily falling off, ultimately leading to the loss of his ch’i and the race.

Unapologetic Cobblebone continues as I find myself thinking about little else other than Keepers Tour 2012: Cobbled Classics.

78 Replies to “Anatomy of a Photo: Drifting Stones”