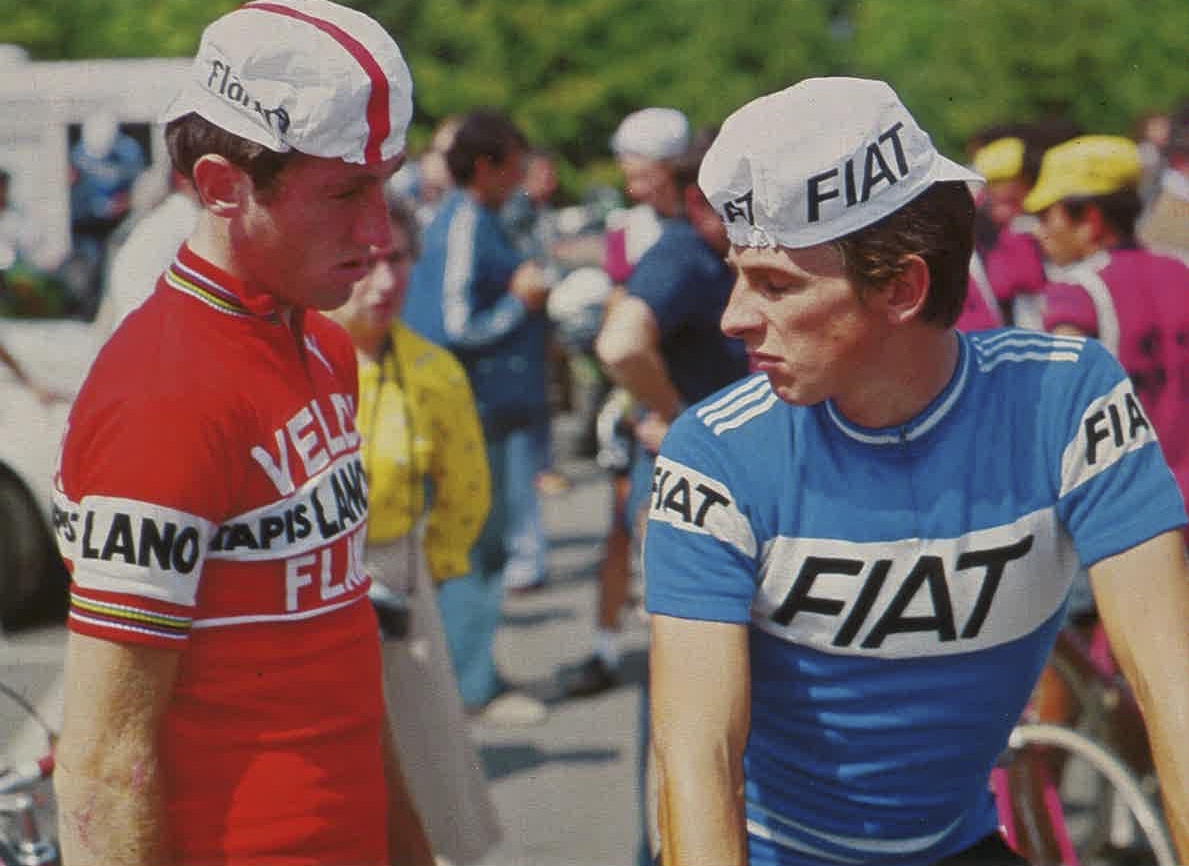 Guest Article: Anatomy of a Photo – The Look

This article could be just about the wearing-o-the cotton cap. That is the Pro look right there folks. It’s too bad this helmet craze has gone and ruined it all. It’s almost reason enough to ride the old timey Eroica Strade Bianche; a natty cap worn backward with no-one having a moan about it. @Wiscot is doing his usual excellent work here. Thanks @Wiscot.

As we all know, a certain rider from a southern US state famously threw out a “look” at Jan Ullrich on L’Alpe d’Huez during the Tour de France in 2001. It was a look that said “I’m outta here and there’s nothing you can do about it.” Given the Texan’s masterfully measured intake of pharmaceuticals, there was indeed little Ullrich could do.

Let’s turn the clock back to 1978 and the Tour de France. Two young professionals are lined up at the stage start, ready to do the bidding of their team leaders. English-speaking riders were still relatively scarce at the time so these two had something in common besides their status as domestiques.

On the right we have the 22 year old Paul Sherwen from England. He turned professional in 1978 for Fiat-La France, a French team and whose teammates in the 1978 Tour included no-one of any real accomplishment, although the directeur sportif was the legendary Raphael Geminiani. Sherwen would win seven races as a professional, establishing himself as an excellent and tough domestique who fully earned his few opportunities to win.

On the left is the 22 year old Sean Kelly from Carrick-on-Suir in the Irish Republic. He turned professional a year earlier than Sherwen in 1977 and rode the 1978 Tour for Flandria, a Belgian team containing such hard men as Marc DeMayer, Michel Pollentier, Freddy Maertens, Joaquim Agostinho, Rene Bittinger and Marcel Tinazzi. He would win a stage of the Tour that year, outsprinting Gerrie Knetemann on stage six to Poitiers. He would go on to lead teams for 12 years and win Paris-Nice seven times.

However, in 1978, both riders’ palmares were very slim indeed as their job was not to win for themselves, but to assist others in doing so. Their futures were unknown, but surely neither could guess that they would both later land gigs as commentators – and both in English. At the time that would have been regarded as highly unlikely as Kelly’s grasp of the English language was famously difficult to ascertain. He was a rider who, legend has it, nodded in affirmation to a question asked on radio. English-speaking teammates found it easier to communicate with Kelly in French.

But back to the expression on Sherwen’s face. The look Sherwen is giving Kelly is, to me, one of pure disdain. “Who is this barely intelligible tattie-howking peasant from Ireland, and why is he next to me? I rode for the Altringham Road Club, he rode for the Carrick Wheelers.”

Kelly, on the other hand, does a great job of not caring. His crystal ball says “I will become an all-time great. I will win five stages of the Tour, four green jerseys, nine Monuments, podium twice in World Championships and win a Grand Tour. In 1984 alone I will win 33 races, you will become an apologist for one of the greatest cheaters in the history of sport.”

Be careful who you give the evil eye to.

51 Replies to “Guest Article: Anatomy of a Photo – The Look”