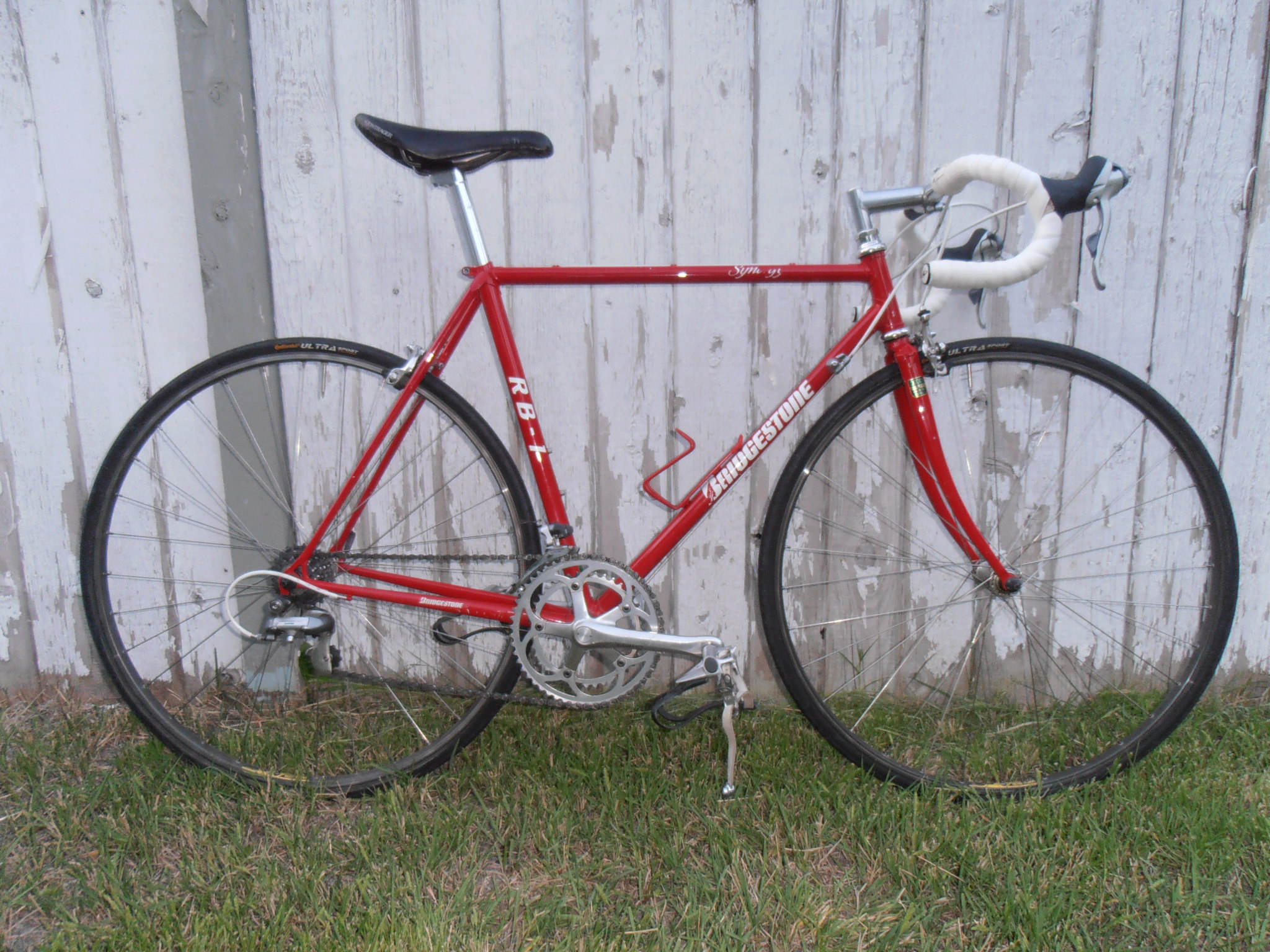 Pineapple Bob? @cyclops goes deep with this reference. Pineapple Bob was a mystical figure in American cycling. He was not known as a racer, more a California bike guru of unknown qualifications and ethnic origins. Bridgestone was a unique brand also of unknown ethnic origins, at least to me. It was not European, it didn’t sound Japanese or Taiwanese. It seemed Californian: a melting pot of components and design ideas. We can always depend on @cyclops to both enlighten and mystify us. His opening salvo of a guest article raised more questions than it answered; specifically, the coupling of Playboy swag and teddy bears in his photo. I’m still troubled by it.

A couple of weeks ago (the day after my birthday) the Prodigal RB-1 returned home after 15+ years of seeking his own way. While the original Prodigal Son found himself wishing that he was eating as well as the (unclean) swine he was caring for, my Prodigal seems none the worse for wear. Along the way he has acquired a crappy tape job (though the Lizard Skin tape is new and salvageable), a set of Shimano 105 pedals and a Bontrager saddle, but  still retains the American Classic seat pin that I remember installing. The STI shifters are an enigma however. I distinctly remember upgrading from the Shimano 600 downtube shifters to 600 STI shifters but they seem to have morphed into 105s. There is a chance that my memory has been corrupted by some unclean living back in the 90s.

What’s the big deal about a run-of-the-mill Bridgestone? When considered with the other “top-of-the-line” bikes in its day, at first glance, it doesn’t really seem that “top-of-the-line”. Nice Japanese Ishiwata tubes with a mishmash of parts like Shimano 600 shifters and derailleurs, Dia-Compe brakes, a Sugino gearset and Wolber rims laced up to nondescript hubs. No Dura Ace in sight and definitely not on par with, say, a Colnago handcrafted by Ernesto himself and hung with various Campagnolo Record accoutrements and Mavic hoops. But Bridgestone, and especially the RB-1, enjoy a sort of cult status among the retro-grouches that prefer throwing the leg over steel. There is a lot of history behind the acquisition of this particular steed.

The American face of Bridgestone was pretty much Grant Petersen* (*note references to “Pineapple Bob” in the linked article). If you are familiar with Grant Peterson, you know that he marches to the beat of a different drummer. While most top-of-the-line bikes were spec’d with either Dura Ace or Record, Grant was all about value. He was known for “weird” spec in that if a particular component had  special merit other than it being best-in-class, he might just go for it. Especially when value was thrown into the equation. Eccentricity also seemed to play a part in the bikes that came across the ocean from Japan – moustache handlebars anyone? If I remember correctly my RB-1 was a 1992. It was spec’d with Shimano 600 downtube shifters but this was right at the dawn of “brifters”. While Shimano STI shifters revolutionized the world of cog selection, there was the issue of the added weight. Does anybody remember seeing bikes in the pro peloton with a right brifter and a left D/T shifter? Rumor has it that my RB-1 was very nearly spec’d that way but evidently that was just a little too much for the Bridgestone brass to swallow, so they put the kibosh(i) on that notion. Besides, Grant was/is kind of a D/T shifters only kind of guy so the bike above ended up being a well -thought out conglomeration of quality parts selected for value and performance, durability, with nice lightweight tubes, as well as some influence and input from Richard Sachs!

I actually met Grant Petersen which brings us to the acquisition of the RB-1 in question. After getting a job at a bike shop and being taken under the wings of two of the most anal retentive bike mechanics in Portland, (they both owned their own Campagnolo tool sets, the ones in their own velvet lined wooden cases) and being introduced to such names as Eddy Merckx, Colnago, De Rosa, Fignon, etc, the Prodigal RB-1 was destined to lose his way. I had lost mine and found myself standing next to I-5 in Salem, Oregon with my thumb out and literally not a dime to my name. A couple of days later I ended up in San Leandro, California, home of Bridgestone USA. I walked into the front office and asked for a job. The receptionist gave me an application and a card with a familiar name on it. The name was that of the Bridgestone rep that used to service Oregon and Washington. He was really surprised and happy to see me but he said that they had no openings at the time. However, they did need somebody to put together all the bikes that they were taking to the upcoming InterBike show. I jumped at the opportunity and I was introduced to Pineapple Bob and we got busy. It only took two days for me and “Robert” to complete assembling the bikes so it was a short gig but the fruit of my labor was that I was allowed to buy an RB-1 for $314 +tax! Three hundred and fourteen freaking dollars for Bridgestone’s top of the line bike! I loved that bike and I rode it all over the western United States. I don’t know why I ever sold it but it has returned to its rightful place in the N+1 panoply at Cyclops Central.

Now the question is: what should I do with it? Should I just leave it as is (except maybe replacing the  saddle with something white, flat, and awesome and spinning some Look pedals onto the cranks)? Or do I restore it to original state and deep-six those 105 brifters? Or do I do what I fancy and add a modern take to the classic Euro-inspired angles and throw my Zipp 303 tubs and some Campag Super Record 11-speed bits on it? I could rebadge it as an RB-0 (zipp).