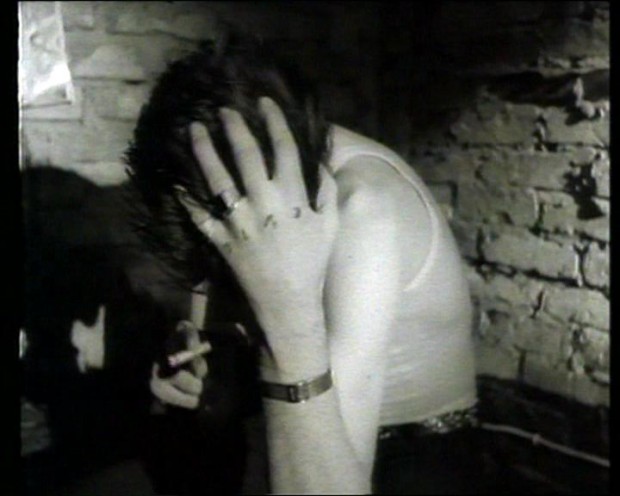 It began when they come took me from my home
And put me in Dead Row,
Of which I am nearly wholly innocent, you know.
And I’ll say it again
I.. am.. not.. afraid.. to.. die.

Cold, still, heavy, damp air encourages one to remain ensconsed, the familiar nagging doubt weedling away in the back, make that the front, of my mind, and I concede; I am afraid to die. Alloy, rubber and carbon my Trojan horse, Flandrian Best my only armour, protecting the extremities yet ill-equipped to deal with internal forces.

I began to warm and chill
To objects and their fields,
A ragged cup, a twisted mop
The face of Jesus in my soup
Those sinister dinner deals
The meal trolley’s wicked wheels
A hooked bone rising from my food
All things either good or ungood.

I can see sun, but not feel it. Hills all around, yet only capable of pancake profiles, the fear chips away at me. They were my friends, before, now a mortal enemy. Ungood.

And the mercy seat is waiting
And I think my head is burning
And in a way I’m yearning
To be done with all this measuring of proof.
An eye for an eye A tooth for a tooth
And anyway I told the truth
And I’m not afraid to die.

The V meter never lets one down, all the proof is in the bones, ready to crumble, the lungs ready to collapse, the brain, already there.

The red mist, some call it. Wasn’t expecting you so early, old friend. And you really do need to do something about that breath, if it’s to be expelled upon my neck all the way while climbing this bad wall. Red, black, red, black. Not light or dark, only dark.

I hear stories from the chamber
How Christ was born into a manger
And like some ragged stranger
Died upon the cross
And might I say, it seems so fitting in its way
He was a carpenter by trade
Or at least that’s what I’m told
Like my good hand tattooed E.V.I.L. across it’s brother’s fist
That filthy five! They did nothing to challenge or resist.

Playing the numbers game now. Survival mode kicks in; where once there was power, agility and grace, now only sits a lethargic, forlorn figure, yet still fighting. Five others accompany me, they’ve been here before, we’ve swapped roles now but none are sympathetic. Nor should they be. Five is all I have, but not them. My internal five. Nailing me to my own cross.

In Heaven His throne is made of gold
The ark of his Testament is stowed
A throne from which I’m told
All history does unfold.
Down here it’s made of wood and wire
And my body is on fire
And God is never far away.

Yes, my body is on fire, some places more so than others. No, God is nowhere to be found.

Into the mercy seat I climb
My head is shaved, my head is wired
And like a moth that tries
To enter the bright eye
So I go shuffling out of life
Just to hide in death awhile
And anyway I never lied.

This seat is showing no mercy at all. Not enough time sat on it means that this occasion will be remembered, for a few days at least. The sun has no fight here, the skin usually glimpsed through helmet vents protected not by hair but by cotton, not from heat but from cold. Skin is cold to touch, yet blood is boiling underneath.

My kill-hand is called E.V.I.L.
Wears a wedding band that’s G.O.O.D.
‘Tis a long-suffering shackle
Collaring all that devil blood.

The left hand is the evil one; the one with the power to make the biggest change to the circumstance, from 39 to 53. It twitches, it prods, it’s told by the legs to remain shackled. There is no fight to back up the threat.

And the mercy seat is a-burning
And I think my head is flowing
And in a way I’m hoping
To be done with all this weighing up of truth.
An eye for an eye And a tooth for a tooth
And I’ve got nothing left to lose
And I’m not afraid to die.

It’s so close I can see it, though not feel it yet. The end. A second, third, fourth wind now, blowing their last breaths, every single one seemingly the last. Hope is not a fuel source though, it can only sustain you so much. Nothing left to lose, losing everything that’s left.

Now the mercy seat is waiting
And I think my head is smoking
And in a way I’m hoping
To be done with all these looks of disbelief.
A eye for an eye And a tooth for a tooth
And anyway I told the truth
And I’m not afraid to die.

I must look like death warmed up, the Grim Reaper himself, judging by the reactions of the fishmonger and brewer who I now beg for their revitalising wares. Emptiness has never been so fulfilling, so complete in its void, dead airspace filled with the smoky voices imploring me to join them.

And the mercy seat is waiting
And I think my head is burning
And in a way I’m yearning
To be done with all this measuring of proof
An eye for an eye And a tooth for a tooth
And anyway I told the truth
But I’m afraid I told a lie.

How far did we travel, how long did it take? I have no data, no concrete figures, and it matters not one iota. What is important is the demons are slayed, the toxins purged, the soul emptied and refilled. Until next time, when I expect to be graced with their presence once more, as always giving and taking, giving and taking, until neither they nor I can give or take any more.

21 Replies to “The Mercy Seat”