Yes, this makes three Guest Articles in three weeks, but we run the show around here and we do what we want. Especially when it comes to solid, 24-karat gold Cyclist/Rock star comparisons. Especiallier when it comes from none other than Keeper Jim’s lovely wife and food-writer celebrity, Jess Thomson. Its cute seeing the family come together to uphold Jim’s twice-annual Article quota.

And speaking of Keeper Jim, he is rumored to be making a cameo appearances at tomorrow’s Ride and Book Signing at Branford Bike in Seattle in support of our book, The Rules, The Way of the Cycling Disciple. Looking forward to seeing you there!

When German giant Marcel Kittel stomped across the finish first on Corsica last year, there was no ambivalence. He had power. He had grace. There wasn’t anyone faster. And in just a few pedal strokes, as Kittel pushed Cavendish from his long reign atop the sprint headlines (in my uneducated spectator’s mind, anyway), I developed an obsession.

Last year, I broke a collarbone in a crash on the first day of the Tour, which meant I had time to obsess from my cozy spot on the couch. Still, given that I’m a happily married woman teetering toward middle age, and that I’m the kind of sometimes cyclist who breaks every single Rule, and that I really only get excited about cycling when there are sprints, climbs, or crashes, the concept of an infatuation was unusual and embarrassing enough that I hid it. I don’t have the pedigree or the personality for a Tour crush. (My Keeper husband might, but that’s a different story.) But the blonde coiffe, clearly cared for off the bike. The wry smile. The crying, for God’s sake.

Last week, when Kittel crossed the line first in the first stage once again, this time in Harrogate, I realized with a blinding flash of the obvious that I’ve had no choice but to crush. I have no choice, because Kittel has the genetics of a rock star. I have the genetics of a former teenaged girl. I am–and millions others in my general age group also are, I assume–deeply and helplessly programmed to swoon when Kittel doffs his helmet because Marcel Kittel is the Vanilla Ice of cycling. 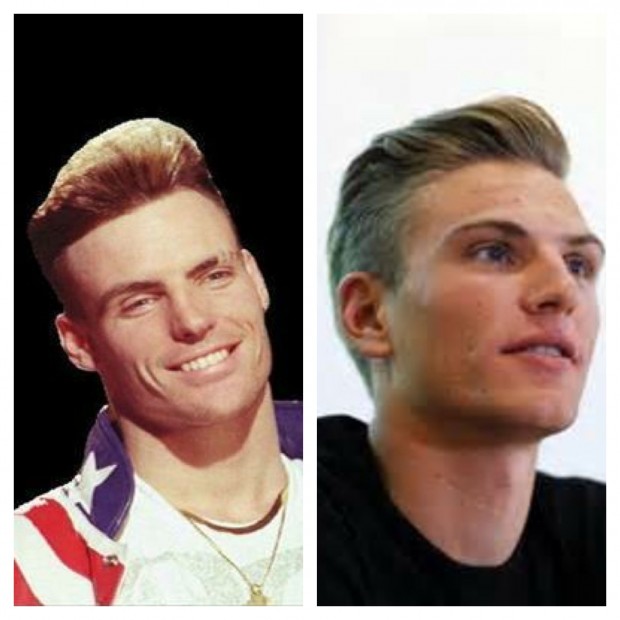 When I saw Ice, as I think we called him, perform live in 1990, there was no questioning whether he was talented. No man who comes up with lyrics as perfectly simple as Ice, Ice Baby can be questioned. He embodied perfection. He dripped young, infectious energy.

Wait. Wait, I’m totally wrong. Vanilla Ice was a terrible artist that I’m ashamed to have listened to at all. So call Kittel Vanilla Ice plus, one might hope, more popular longevity. And more talent. 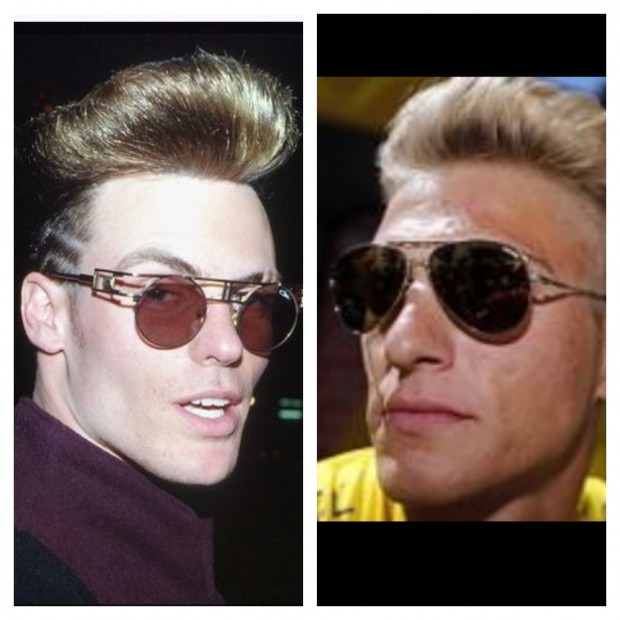 Intrinsic value aside, the correlation holds visually. Look at them, people. The nose. The lips. The hair. Even the hairline. And alas, the heinous shades. I’ll give you that the lower halves must not look anything alike, but the similarities are undeniable. They might as well be twins, separated by a mere two decades and the Atlantic Ocean. Imagine Kittel as his lead-out train sweeps aside: I’m on a roll, and it’s time to go solo.

I’m not saying Kittel should get cocky (or Coquarded, as the case may be), offend the masses, and ride into history as a two-Tour wonder. Ride like a rock star, pretty boy, for as long as you can. Just remember, when you’re older than Voigt and Voeckler, that you may have a second career waiting for you. Clearly, given that you reported the toughest part of Stage 3’s day being when an airline employee confiscated your hair gel, you have the capacity for the intense self-care stardom requires. 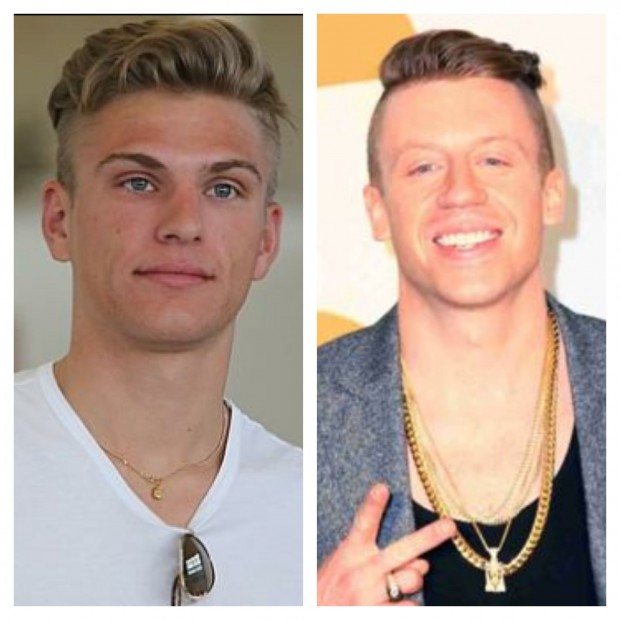 And, you know, if Ice isn’t your style, don’t feel hemmed in. Just keep cultivating that inner Macklemore, which I’ve seen, too. In fact, better start now, maybe with some white-walled tires, while While Walls is still on the radio. Who knows who you might bring to cycling.

38 Replies to “Guest Article: Ride Like a Rock Star”