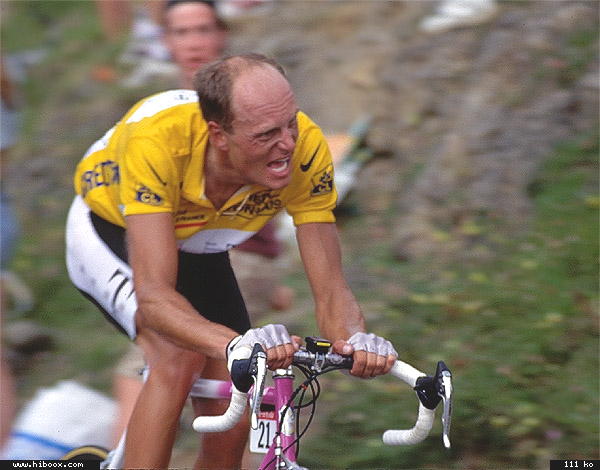 What a shocking week in cycling. About a half dozen riders and two team doctors have admitted to doping at Team Telekom (which later became T-Mobile) during the 90’s. Among the riders who have admitted using drugs are cycling icons Erik Zabel and Bjarne Riis.

So far, the admissions have culminated with Riis admitting that he used EPO during the 1996 Tour de France – which he won. (Riis was rumored to be nicknamed “Mr. Sixty” due to his high hematocrit count, which becomes dangerous when above 50.) We will have to wait and see if this ends up with anyone losing their titles: Riis could lose his yellow jersey (overall winner), and Zabel his green jersey (points winner).

Interestingly, if you look at the results of the ’96 Tour, more than half the riders in the top 10 have admitted to drug use or have been very closely tied to it:

Perhaps most surprising about the admissions is that many of the riders were not star riders looking for the extra edge to win; they were riders of the domestique category: a caliber of riders who’s role it is not to win races, but to serve the team in other ways, such as setting tempo at the front of the peleton, chasing down breakaways, or to protect their team leader during a race. Rolf Aldag, who was an excellent domestique, said that during the ’95 season, was was in awe as he would routinely get dropped by the peleton during races. He simply couldn’t keep up with the pace – let alone serve his duty as domestique. He turned to drug use in order to be able to continue in his profession. It seems the speed of the races increased so dramatically during the 90’s that just to keep up, riders had to dope. Drug use was wide-spread and riders were not simply doping to win, but to handle the speeds.

As all these confessions come out, I am strangely optimistic. I hope we have rounded a corner. I’ve found in the l

ast few months that I’m relieved when checking cyclingnews.com that there isn’t a Cycling News Flash in the Latest Updates section – usually indicating another doping development. At the same time, as I’m following the Giro d’Italia, I’m happy to see there is no dominating team and the peleton has its off days where it lets a breakaway get away with huge time gains because the riders need a rest. In the days of Armstrong the pace was high every single day and only on rare occasion did a break get big time gains. The peleton never took a rest – it seemed like the Energizer Bunny.

Cycling gets a bad wrap for doping but it’s also one of the only sports actively fighting to clean itself up. Major League Baseball’s attempt at controlling doping is pathetic with its one random drug control annually and f they are caught, players are suspended for 10 days. Compare that to cycling with it’s thousands of tests annually – many random as well as in and out of competition – and if they’re caught, riders are suspended for two years. I’m proud to be part of a sport that is trying to open its eyes to its problems, rather than continuing to turn a blind eye. But if cycling is going to clean up, it’s going to need everyone’s help: the teams, the sponsors, cycling’s governing body, the race organizers and the fans.

I believe pro cycling is as it stands not a sport you can be competitive in without doping. The sponsors demand results and

television exposure. The team management is usually made up of ex-pros who understand the demands on the riders and are part of the sport’s doping history. The UCI is fighting a political war to appease the World Anti-Doping Agency and to appear to fight doping without taking any realistic measures to be effective. The race organizers want historic races and to cover more ground in order to increase sponsorship revenue and collect fees from participating cities to host the race (sometimes even resorting to double-stages). The fans want epic day-long breakaways and nail-biting finales.

If cycling is going to change, it will have to change from all angles. We need realistic sponsors who are in it for the long-run and are willing to stand by the sport through the rough times and who understand that their riders can’t be winning constantly. The team management needs to be sanctioned along with the riders and can no longer act like they have no responsibility or control over what their riders do. The UCI needs to fight doping the way police fight crime: they need to have riders embedded in the peleton who can help uncover doping circles and they need to plea-bargain reduced sentences in exchange for information. The race organizers need to understand that the riders can’t ride 250km every day for 21 days over mountains and through all kinds of weather. And we, the fans, need to understand that if doping is no longer part of the sport, the speeds will fall, the races will shorten, and our favorite riders will sometimes falter and become human again. The riders cannot solely bear the burden to clean up the sport in an environment that is set up to virtually require doping.

I hope things start clearing up, and I hope these things start coming out during the off-season when nothing interesting is going on as these stories have a knack for breaking during the exciting parts of the season.

I’d like to get back to watching Di Luca ride towards winning the Giro.