Return to the Pain Pool 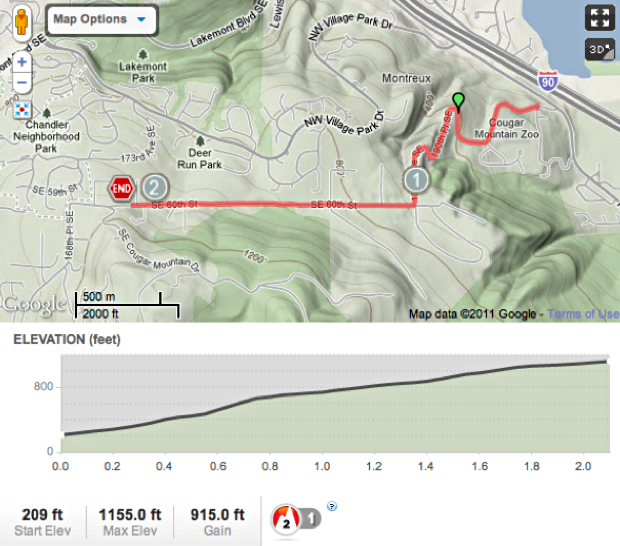 I forget all maner of things these days. I forget that climbing isn’t fun; it hurts. I forget that I’m not good at it. I even forget what hurting feels like after it’s over, which I think might be at the root of why I keep going back for more. I forget my vows never to do a climb again (I’m having a re-match with Haleakala in August.) But most of all, I forget how hard this particular climb is.

Zoo Hill. It has a reputation around here in Seattle as being one of the hardest local climbs around. Naturally, some twisted ass decided to do a race up it as a fundraiser for cancer research. It’s not long, but at a length of 3.4 km and an elevation gain of puke, it’s a stinger that puts you squarely into the hurt locker for a lifetime-seeming quarter hour. Every time I ride it, I’m surprised by the same things.  The first ramps are steeper than I expect as, unfortunately, are the secondary and tertiary sets. By halfway up, you’ve finished the twisty bits on rough roads and switch to the less steep section where I expect to take advantage of my comparative strength climbing rollers better than 15% ramps. This is where I’m surprised by how long the top is, and how steep it is, and how cooked I already am.

The top, in my estimation, is the hardest part. There’s not much of an art to the bottom. It’s steep. It’s twisty. It’s ugly riding, but there’s not much room for anything, and morale is reasonable since switchbacks will make you feel like a Pro even when you’re going as slowly as I’m bound to. But the top is a long straight road with a few sections that ease off where a strong rider will move Sur La Plaque and make big gains. But there is something about a long straight road that makes a painful climb even more agonizing. I think it’s the fact that every pedal stroke only serves to beat one simple fact into your head: you are not at the end yet, and that last pedal stroke didn’t bring you nearly as close as you’d liked.

After the race was all said an done last year, and the last memory of pain had left my feeble mind, I remarked that I’d like to go sub-13, which is a lofty goal. Even with the weight I’ve lost this year, I’m thinking that’s a tall order, and I’m even a tall guy. I also said I’d try and go top ten, which is more than lofty. I’m really wondering what I was thinking, as I’m pretty sure I don’t take halucaknogetics. But goals are made to be broken, so I’m going for them both, and vow to leave everything on the road in my effort. It is likely to rain, too, which will make it even more interesting.

The pain I’m sure to endure will be made a bit better knowing that the ride is for cancer research with donations going to the Fred Hutchinson Cancer Research Center, which represents one of the best hopes we have in our fight against this terrible disease that touches so many of us. The Climb4Ccancer Charity has organized several local businesses who will match any donation made by the racers on race day, so if you’re riding, bring your checkbook. Also, many thanks to Joel Blatt who organizes the race each year, and to Branford Bike who is the sponsor and will be providing prizes. Doug at Branford acted as my consigliere during my TSX build and even rebuilt my Ergo levers for me. Great guys, and vehement followers of The Rules.

Special note to G’rilla, who is starting 30 seconds after me: if you pass me, I’m taking back your V-Kit and demoting you to a permanent Level 4.

*Note: the map above is in miles and feet.  Despite my best efforts, MapMyRide refused to display this in metric. Shame on them.

110 Replies to “Return to the Pain Pool”