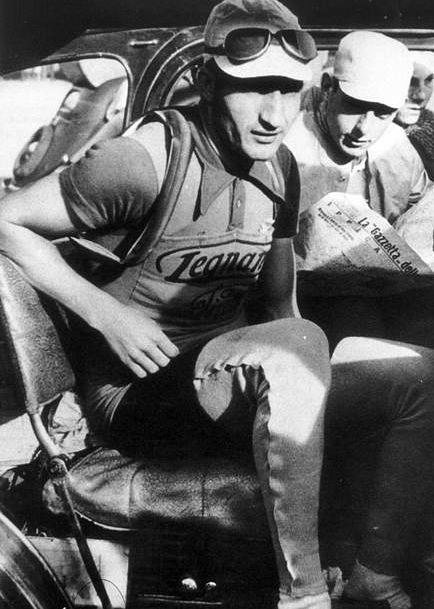 Innovation is a beast that lurches in leaps and bounds, fueled by its own momentum and restrained by its own progress. It lays dormant for ages before springing to life and briefly disrupting the world around it. And, just as suddenly as it appeared, it ambles back to its cave to slumber once again.

Until 1984, eyewear protection in Cycling was governed by the same parameters that remedied the average librarian’s poor eyesight and kept airplane debris out of the Red Baron’s eyes. But then Oakley solved that problem and within a decade, the riders that had spent a century picking road grit out of their eyes universally were wearing badass shades that simultaneously made them 97% more intimidating and got them 74% more chicks.

That’s just one example. Have a look at Gino here, shadowed by his pal Fausto. On what was apparently a brisk morning during the Giro d’Italia, he had to have his mother stitch a pair of legwarmers together from what appears to be soft underbelly of baby buck sea monkeys. Or burlap sacs, although that seems a bit far-fetched. Not to mention his jersey and bibs are made of wool, which is a terrific material so long as it isn’t used anywhere where holding its shape when wet matters. And, although you can’t tell from this photo, he’s wearing oxfords – literally wearing dress shoes – with cleats nailed to the soles. I’m nostalgic for the look, but I’ll be fucked if I ever wear any of that on a bike, and not only because I’m fond of baby buck sea monkeys.

Right around the same time that Oakley was contemplating how to better shade a rider’s eyes, some bright spark at Castelli realized that elastic would do a better job accentuating a rider’s curves than wool ever could and the Lycra bibshort was born, forever changing the way Cyclists cultivated their tan lines. As with Sunnies Revolution, within the decade synthetic fabrics took over nearly every aspect of Cycling kit, with the Giro d’Italia being the last stronghold of the wool jersey and not giving way to a synthetic leader’s jersey until 1989. I might also mention that prior to the invention of the synthetic jersey, no one needed to install mudguards on their bikes because whenever it rained, wool jerseys stretched out below the saddle, making fenders unnecessary.

This innovation in kit was mirrored in bicycle technology, which had laid similarly dormant since the invention of the parallelogram derailleur. Seemingly all at once, aerodynamic equipment, composite frames, clipless pedals, and brifters arrived on the scene, easily making the 80’s the most innovative period in Cycling, apart from the 1880’s (when the bicycle as we know it today was actually invented).

In my own journey as a Velominatus, this was the most exciting time in the sport. The cyclic nature of innovation suggests that I will not see another such period in my lifetime, and 50-100 years is a long time to wait, unless you’re a Grail Knight. The problem with innovation, if we can call it a problem, is that disruptive change tends to polarize; we either love it or we hate it, and in order to accept accept change we have a tendency to reject the old in order to justify the new. The trouble is that we can’t tell the difference between innovation that solves a real problem and innovation that feels exciting because it’s different. But irrespective of that, legacy is brushed to the side and rejected as antiquity.

The Velominati are often accused of being luddites, praising the ride of steel and espousing the merits of wool over modern fabrics. But Legacy and Innovation are two ideals we hold equally in our hearts; we desire the latest, lightest carbon innovations as much as we cherish the steel rides we also keep in our stables. (Rule #12, remember?) We are judiciously skeptical of new developments like disc brakes and electronic shifting, but also re-evaluate what worked well in the past that perhaps doesn’t work as well today. I don’t see the need for electronic shifting, but admire the change in paradigm that SRAM’s eTap provides. And I will go kicking and screaming into the disc brake world, but if time demonstrates the value, I will change eventually.

Contradiction and myth occupy the gray space between absolutes where we find the most interesting revelations in life. I live in yesterday’s future; I have no intention of going back. But I will always respect those who have laid the path upon which I ride today.