Skip to content
Nov 19 2012 by frank
Accessories and Gear

The Eye of Sauron 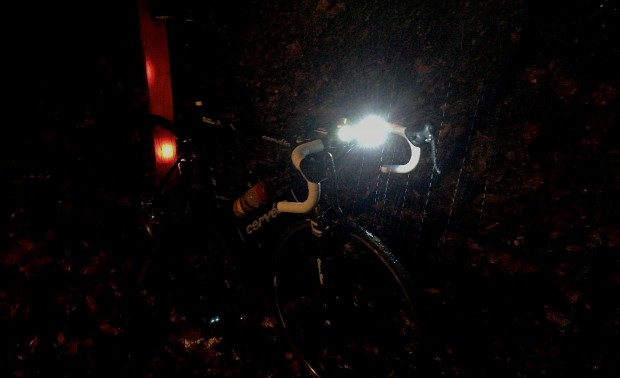 Aside from wheels staying in one piece and the frame holding together, the thing we take most for granted when riding a bike is how our bodies instinctively respond to and absorb bumps. The human body is, in fact, an incredible shock-absorber; our arms and legs are capable of flexing and shifting in ways that no mechanical suspension is capable of and reacts at near-instantaneous speed to the intelligence streaming in from the ocular system. Remove the power of sight from the equation and the effect is staggering.

My first encounter with night riding was during a 24-hour mountainbike race in Minnesota. Until that race, I had taken care to always ride during the day, partly because I couldn’t afford a reasonable headlight and partly because I could always arrange my training to take place during daylight. A 24-hour race, however, held distinct implications for nighttime riding.

I never bothered practicing riding at night, and I didn’t bother with buying a proper headlamp. Instead, I recommissioned my semi-reliable headlight which I used for nordic ski training in the dark winter months. The week before had also seen the decommissioning of my first-generation Rock Shox which had always graced the front-end of my beloved Schwinn mountainbike, made of what I assume were sand-filled tubes. I didn’t maintain the shock the way a shock should be maintained, and with its death came the rebirth of the fixed fork that had originally steered the machine.

I don’t need to go into detail on the race, but suffice to say that my headlamp stopped functioning within minutes on the first nighttime lap and that I rode the remainder of the race by the light of the moon and my insufficient instincts. Climbing was unpleasant, flats were uncomfortable, and descents were a blend of suicide and anarchy. Each bump the front wheel found blew through my unprepared arms and cascaded through my body, usually focussed on the saddle which ungracefully found its way to my crotch whether I was sitting on it at the time or not.

With this induction into the dark art of night riding, it has been something I’ve typically done with some reluctance. In other words, I’ve avoided it like the plague. Living in Seattle and having the privilege of a fulltime job does have certain ramifications on riding in daylight hours in Winter; namely that it isn’t possible. With the introduction of a good headlight comes the surreal solidarity of riding cocooned in a cone of  light. The shorted line of sight together with the elimination of one’s peripheral vision has an inexplicable calming effect despite the sense that you can’t properly judge the bumps in the road as your headlight briefly illuminates them, and that every puddle looks like a small lake whose depth cannot be judged until you’re on top of it.

I’ve ridden with a Mammut Zoom headlamp and a Lezyne Super Drive, both of which served the purpose of making nighttime riding slightly less terrifying. But with my new 45km commute, I moved to the Lezyne Mega Drive, which is basically a car headlight refactored to fit on a handlebar. I heard that the lights in small villages dim when I turn it to full power and I’ve noticed that deer come running towards it when I ride by with the mistaken belief that it signals the arrival of a deity.

Never one for half-measures, I still mount the Super Drive on the helmet and the Mega Drive on the bars; its like riding with the Eye of Sauron on your bike. Oh, and I have three different red flashers on the back of the bike and another white flasher on the front. You know, just in case.