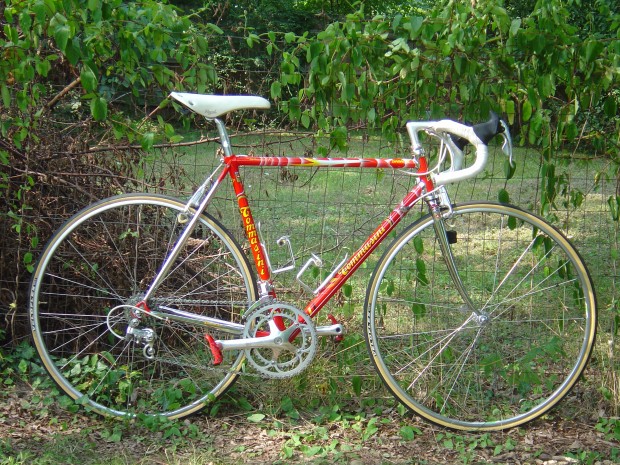 In our first installment of reader-submitted The Bikes articles, we bring you this drool-worthy Tommasini, fully equipped with Delta brakes, classic-bend bars, a Regal saddle, and three-cross wheels.

Ron takes us through a story of how being the Cycling Sensei sometimes works out to the benefit of not just the student, but also the teacher. Enjoy.

A few years ago I was helping a friend find a new bicycle. As the resident Velominatus amongst my friends, I’m drafted into this duty whenever a mate has finally heard me discuss the beauty of cycling for so long that they can’t stand it, they need in on it. He was after a road bike and his budget limited him to used ones. Knowing his frame size, which happens to be the same as mine, I set to scouring the interwebs for the right bicycle. I had been looking around for a few weeks, checking classifieds on various forums and watching eBay for strong contenders. One Thursday morning I logged in to check out my watched items list and realized a gem of a find had moved to the top. Somehow, in searching high and low, I’d added this bicycle to my list, but forgotten about it. Now as I stared at the photographs of it, I found it hard to believe such a fine bike had passed largely unnoticed. It was a sharp looking Italian bicycle, steel, mostly red, with some white and yellow, plus a chrome fork and rear triangle. The paint scheme was busy and a bit loud, yet still classy in that Italian way.

A few months before that morning, I had started planning my dream bicycle. I was a budding cyclist enthusiast, a nascent Velominatus, and had been riding my used, ill-fitting, aluminum Cannondale for five years. Thus, I set out to choose what bicycle I was going to buy for myself as a gift upon finishing my university degree. Hey, I needed a carrot, I thought. Or at least a way to waste away those hours when I should have been working and progressing, but couldn’t get bicycles off my mind. Brand new carbon, I wondered. The allure of riding what the pros ride. Titanium? It looks pretty sharp, in an understated way, and will last forever. But I’m too young, still in my twenties, I can’t buy my last road bicycle at this early age. I had always found thin-tubed steel racing bicycles with classic geometry to be the most stunning breed of road bikes. Maybe my attraction to them was linked to the summer days when I wasn’t away at a sports camp and would spend the afternoon in my cool basement watching the Tour de France on ESPN, back when they actually covered sports beyond the NBA and NFL. I watched LeMan and Fignon ride like mad on high-quality steel bikes with pretty rad paint jobs.

I knew the Dream Bike, my carrot towards graduation, would be steel, and hopefully something made in Italy. Arriving at this conclusion, I got back to my studies and kept on riding my Cannondale, finding the fact that it was too big for me just more inspiration to push myself up new hills, using only my internal V-meter.

But that Thursday morning I sat staring at the fine bicycle, the properly-sized red Italian steel road built when I was only eleven, wondering what I should do. I was only a few months further along with my work than when I’d settled on the Dream Bike. Still, how could I resist? It was in my size, it was essentially new old stock, and the bidding was rather low, at least for such a prized machine. To complicate matters, I’d recently received a small inheritance from my grandfather’s estate. It felt odd to get something prized, money, when I was still having memories of him pass through my mind on a frequent basis. I know some people spend years waiting for their relatives to die so they can grab their money, but it felt strange to me to suddenly grow wealthier when I was still thinking about his passing. The money, inherited by my parents and given in equal parts to me and my two siblings, was to be used for something we’d never normally buy, something that we didn’t really need. My father told me that his father had worked long and hard for the money as an airplane mechanic and he wanted me to spend it on something special, a gift across generations. A beautiful red road bike I’d cherish and meticulously polish and ride on special, warm, sunny days seemed like the perfect way to spend some of the money.

By Friday I decided to investigate the bicycle further. It was being sold by a bicycle shop and I tracked down a number for them. I spoke with an employee on the phone and he informed me that the bike was in pristine shape, basically new, with an original Campagnolo C-Record gruppo, original Continental Grand Prix 3000 tires, Sigma computer, Campagnolo hubs and rims, a Cinelli stem, and white Cinelli tape. My excitement was tempered by the fact that he told me there had been a great deal of interest for the bike, including a guy who collected bikes from this builder and had called from Australia to inquire about shipping costs; he was willing to pay $500 just for boxing and shipping. That was grim news.

The only thing I could do to keep my mind off the bike was to go out and ride. Friday seemed infinite. The bidding was ending on Saturday and I had a nervous sleep the night before. I went out for a ride Saturday morning and spent the entire time thinking it over. Do I need this bicycle? Wasn’t I supposed to wait until I finished school? My only road bike to date has been a mid-level Cannondale. Am I worthy of such a bicycle? When I got home the bidding price was at the same level it had sat perched at since Thursday. I wasn’t sure if I should be nervous or confident. Around three hours before the auction closed I decided I was going to bid, and bid aggressively. Screw it, I had the money, and the bicycle was stunning.

When the final hour arrived I was nervous to the point of having jittery hands. The minutes ticked by and I couldn’t do anything else but sit and wait and watch. The clock went under five minutes and still nothing happened. I was a very green Velominatus at this point so wasn’t that aware of what price it might go for, nor smart enough to simply enter a high bid significantly beyond the current bid. I wanted to win this thing in a shootout, guns blazing. I bid as the clock went under a minute. “You have been outbid.” Oh no. I bid again. “Reserve not met.” Huh? I bid a third time, all within the final forty-five seconds. The screen rolled over and the new screen loaded. Momentary freak out. “You won the item.” I sat in shock, not knowing whether to scream or cry or jump up and down; I was completely worn out from the stress and had a hard time believing I’d actually won the bicycle. I cringed when I realized that my winning bid was just $100 below the “buy it now” price which had been up until the final day of the auction. For less than the cost of a new saddle I could have saved myself all that insanity.

It now hangs on the wall in my house, taken down only on the finest days, when the sun is warm and bright. I love riding the bike and I feel fortunate to own it, as if I’m a lucky fellow, entrusted to ride and polish and cherish this wonderful machine sent straight from Italy. It might violate a recently brainstormed Rule about buying built-up bicycles, but a NOS 1990 Tommasini Diamante is hard to pass up. And possibly the best part about the whole thing is that whenever I ride it I think fondly of my grandfather. I hope I spent your sweat-soaked wrenching money well, Jerald!