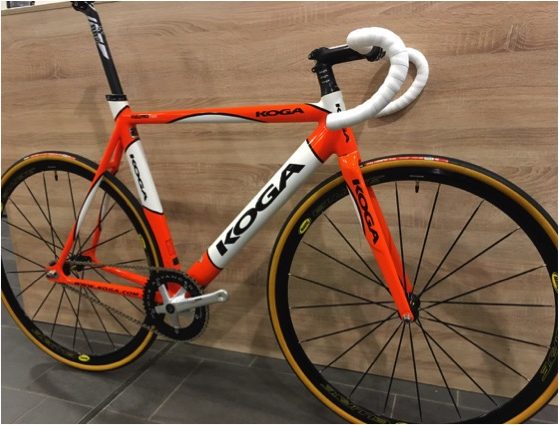 With all those posts on riding in winter and being visible, either by putting Eyes of Sauron or other car melting devices on one’s steed, or by even considering a YJA instead of donning plain black kit, it was about time to finally get this article on paper. I’ve been thinking about it now for quite some time and it simply irritates me. (Also I was utterly fed up with the fact that it has become impossible to upload pictures and since I just got a new bike last week, I need to find a way how I can post a picture of it.)

Rule #8, Rule #26 and Rule #57 all deal with our bikes looking fantastic. And, these are not the only Rules that revolve around keeping our Tools in pristine condition. We adhere to Rule #65 but then why, oh why, are some of us not proud about our steeds and their provenance by buying black bikes with black or dark-grey decals.

While on the bike, I do not only turn my head at every shop window, but also at every bike passing me (on the other side of the road of course). I have developed a keen eye to spot the maker at 60km/h (footnote: me at 36km/h in one direction and opposite traffic at 24km/h) and take pride in being able to name at least 2 to 3 bicycle brands for every letter of the alphabet when I wake up at the oddest of times.

But this fun gets spoiled by black on black decals. And it’s going viral, it’s an epidemic. Even my own favourite maker, Koga, which became famous for their regal blue metallic steel Miyata frames, now has several dull black options. Their top six models are all some form of grey, and their prime machine has grey decals. I was desperate 30 years ago to get a blue frame but could not afford it, so ended up with an Indian Red Koga. Two years ago, after I took up cycling again, I chose an aluminium frame for my new Koga over a carbon frame, because it came in said blue with white clearly visible decals. For my latest addition, a Koga track bike, I chose a violently orange colour with black decals against a white background. (Note that any Rule violation is only because it’s still at the LBS where it was built up and I have not yet got it in my possession, so there’s no need to refer me to look better into Rules #26, #45, #60). It’s actually a NOS frame but you’s gotta love me them colours! It will look so cool with the V-decals and the cufflinks and and and. Totally compliant.

I mean, a black Bianchi, who would want to throw any money at that? Why put down lots of money if no one knows what bike you ride? It’s not as if you are riding your Beemer and your garage offered the free option to remove the type-indicator on the back because everyone will know what car you drive. That’s not how it works with bicycles. And if you’re still not convinced, look at what the Pro’s do: do they ride on bikes that conceal their makers?

Be a sport, and have Merkxy on your Fellominatus, ride a bike that shows off that you are proud to ride it!

44 Replies to “Guest Article: Black Is Not The New Black”