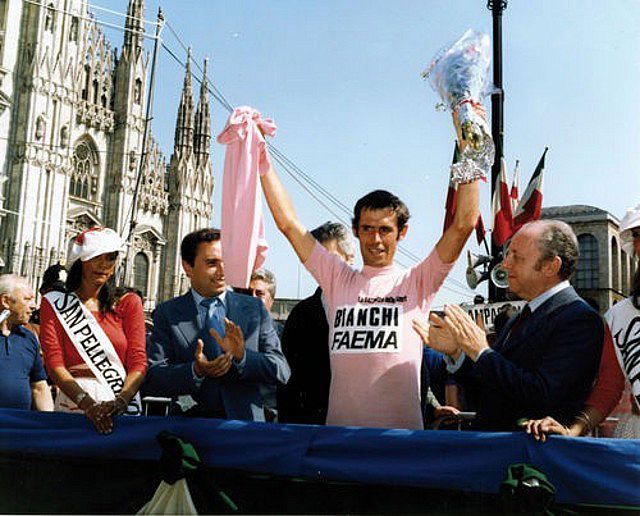 The 2015 Giro is almost upon us. Productivity in May is likely to drop off. The combination of Tivo and free daily coverage by the BeIN channel means Gianni’s production, already dangerously low, will sink to record levels. Grazie to @Pedale for this link for the Giro. And grazie to @Wiscot for another superb article on the the Giro’s past. The Giro is just over a week away, for this, we can be happy.

The 1989 Tour de France’s final-day time trial loss by Laurent Fignon to Greg LeMond is one of modern cycling’s defining moments. LeMond, 50 seconds behind the yellow-clad Fignon, used the latest TT technology to maximum advantage, powering over 24 kms of Parisian streets to beat le Maillot Jaune. On the day the ride was hailed as a miracle for the American and a devastating defeat for the Frenchman. However, unknown at the time was the extent of Fignon’s excruciating saddle sore that made riding almost too painful to bear. But he was French, in yellow, and this was the Tour – a no-show on the last day into Paris (and Fignon’s home town) was not an option. The likelihood of LeMond beating Fignon by more than 50 seconds seemed remote. As we now know, the American used new-fangled time-trial bars and helmet to maximum advantage and won overall by 8 seconds. Arguably, that 8 second loss scarred Fignon for the subsequent 11 years until his death in 2010.

As well-known as this particular piece of cycling lore is, we know that history has a habit of repeating itself and indeed this was not the first instance of a grand tour being decided by a handful of seconds in a time trial with injury playing a part.

In 1976 with just two days to go in the Giro d’Italia, Belgian rider John de Muynck was seemingly safely ensconced in the pink jersey with a 25 seconds lead over Italian favorite Felice Gimondi. All that remained after the penultimate stage was a short time trial and an easy criterium around Milan; the win seemed in the bag for the Brooklyn rider if he made it to the last day safely.

However, events on that penultimate day would conspire to dramatically affect what should have been a simple matter for De Muynck to take his first grand tour win.

On the descent of the Colle Zambla, part of the road was undergoing repairs and there was a great deal of loose gravel for the riders to negotiate. To make matters worse, some of the gravel was just after a corner and de Muynck was, perhaps unwisely, taking a drink at the time. His attention distracted, the Belgian’s front wheel went out from under him and he crashed hard. These were the days of no helmets and often no gloves. While nothing was broken, de Muynck suffered serious cuts and grazes to his face, hands, legs and arms. Time ticked away as he picked himself up, checking his injuries for serious damage. Luckily, the wounds were confined to the flesh, not bones, and in a double stroke of luck his compatriot Eddy Merckx, who had been dropped and was suffering greatly with a saddle boil, caught up with De Muynck and paced his fellow countryman back to the head of affairs to finish with the leaders. The jersey, and the race, seemed to have been saved.

Effectively out of contention for the overall win himself, Merckx was worried and concerned about his fellow Belgian’s chances of wrapping up the win. “Tomorrow it will not be all right. With his hands as they are he will not sleep above an hour.” The great Belgian’s words proved prophetic – the next morning De Muynck admitted he had not slept at all, “The pain hammered away in my fingers and without sleep I feel dead beat. I feel as if my knees are made of water.” Ahead of him lay 28 kilometers against the clock and a margin of only 25 seconds on the smooth, stylish Gimondi. Under normal circumstances, de Muynck might have lost a few seconds, but would have retained his lead and the Maglia Rosa.

After being counted out of the start house, Gimondi, a fine rider against the clock, rode superbly, finishing third behind Bruyere and Marcussen. De Muynck, suffering terribly in his desperate bid to retain pink, finished 44 seconds behind Gimondi to lose the jersey by 19 seconds. With the final criterium merely a showpiece for the crowds and offering no opportunity to reclaim time, the Italian cruised to the final Maglia Rosa. In the overall standings De Muynck had to settle for second place – every one of those 19 seconds and more had been lost in just 28 kms against the clock and the blame can be laid at injury’s door.

As devastating as this loss was for De Muynck, he found redemption two years later. In 1978 and riding for Italian-based Bianchi-Faema, he rode a superb Giro to win by 59 seconds with, ironically, Gimondi as a teammate. (Alas, Fignon never had the opportunity to win the Tour again and for many observers the 1989 loss became better known than his two fine wins in 1983 and 84.)

While the 76 Giro set a precedent for the 89 Tour, the same Giro presaged its 2011 edition and the death of Wouter Weylandt. On the very first stage in 1976—an innocuous short 55 kilometres loop around Catania—Juan Manuel Santisteban crashed heavily into a guard rail and was dead by the time the ambulance reached the hospital. This description is eerily similar to Weylandt’s accident. In both instances what were regarded as straight-forward transitional or easy stages were turned into days of tragedy.

So what does a knowledge of history and the awareness of precedent teach us? One, much hyperbole surrounds sport, and yes, Fignon and de Muynck’s losses could be regarded as “shocking” or “devastating” but what happened to Santisteban and Weylandt puts things into a proper perspective. Two, we are reminded that nothing should be taken for granted. While cycling is a magnificent sport it has its cruel side: on one hand situations beyond anyone’s control can turn a potential winner into a shocked runner-up; on another, a routine ride could unknowingly be our last. We ride with the confidence of Velominati, we follow the rules, we feel in control, but in reality we seek the fine point of equilibrium between caution to survive and freedom to pursue happiness.

Recent years have seen the Giro organizers seek ever spectacular stages to wrest back some of the glamour and status that the Tour has long enjoyed over its grand tour rival. No Tour or Giro would be complete without its heroics, blood, sweat, and tears of pain or joy, but as we watch the battle for the Maglia Rosa this year, let’s hope that everyone gets through tired—maybe a bit battered and bruised—and alive.