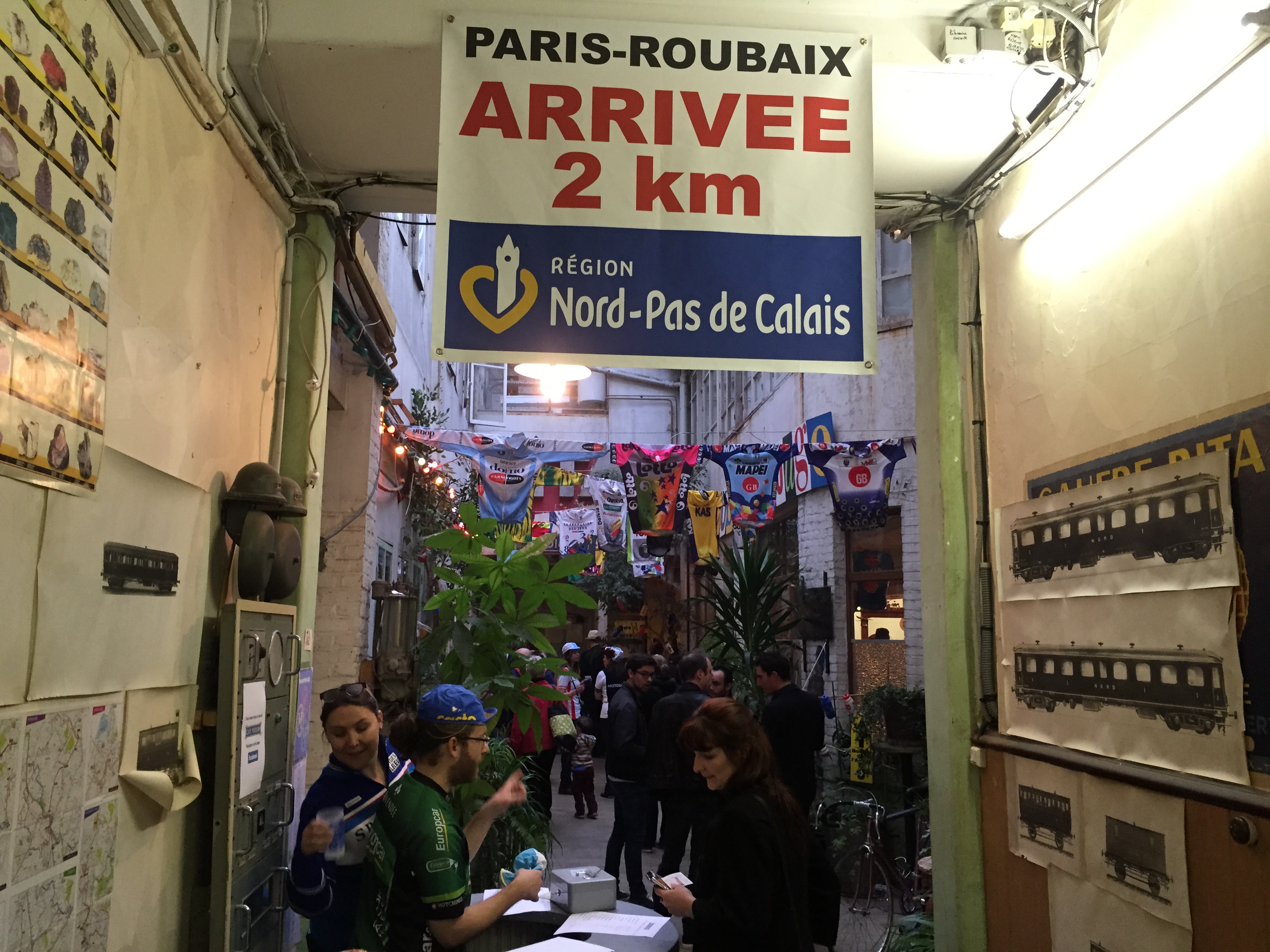 One of the best, most memorable (and repeated) lines from the movie In Bruges is “it’s a shithole”. Of course this isn’t true; Bruges (or Brugge in the local parlance) is a beautiful city with many a charm to captivate the senses. On my third visit to the city during Keepers Tour 2015, the shithole line became a mantra that would be repeated every time another quaint Belgian or French village was encountered. Brussels? Shithole. Cassel? Shithole. Roubaix? Definitely a shithole. Even the locals agreed on that one.

The mystique of Roubaix is owed sqaurely to the race that finishes in the storied velodrome every April. That a town that is plainer than unsalted crisps can hold such a venerated place in the fabric of Cycling mythology isn’t really a mystery though. It owes everything to the race, and nothing to the flat landscape, rows of nondescript brick buildings and dark and dirty streets that make up its veneer. Driving through these foreboding laneways dotted with the occasional kebabery or tabac outlet, one gets the sense that the locals loitering outside aren’t there to happily offer directions to see you safely on your way to the opera. Empty corner lots framed with wire fencing in various phases of neglect are inhabited by teenagers kicking worn footballs, their gritty faces already looking every bit as hard as Peter van Petegem and sporting as much 5 o’clock shadow as the Black-eyed Man from Brakel after a week on the tiles. This is the face of Roubaix that mainstream media either dares not document, or simply doesn’t know exists.

Our trustworthy partners Alex and William know how to keep a KT full of diverse and interesting side shows in the rare times we are not on our bikes. In 2013 Alex ferried us through the back blocks of Roubaix to a little space tucked away at the end of a corridor of an old factory of some sort for a pre-race gathering. The bar cum gallery was festooned with old team jerseys, bikes, memorabilia and a bevy of beautiful women sporting some of those same jerseys. We weren’t exactly sure what was going on, but we enjoyed the look into how the locals celebrated the biggest event of the year for the town. This year we found ourselves once again on our way to the same space, this time with the promise of a cycling-themed band to entertain us after a hard day on the cobbles. William was sceptical as to the entertainment value of the evening, but Alex assured us that we would most definitely be entertained. He was right, as always.

That same little alleyway was sporting much the same decorations and many of the same patrons as our visit two years earlier, but there were more people milling around and partaking in the French national pastimes of smoking, chatting and exuding copious quantities of Casual Deliberation. No matter how hard one tries (or smokes) this cannot be replicated by a bunch of middle-aged Western Cyclists. We stood out like dog’s balls. My limited grasp of the basics of the local dialect gained me just two cigarettes and a dozen blank stares. My Merci Roubaix tee-shirt did start a conversation with a couple of guys drinking Malteni at the bar though, and luckily their grasp of English was far more substantial than mine of French. One of the chaps turned out to be a former stagiaire for the Cofidis team in the early 2000s, but it was his tale of his father’s exploits which really got my attention. Didier Vanoverschelde raced in the 70s and 80s and was a teammate of Laurent Fignon and Paul Sherwen on the La Redoute team, riding four Tours and most of the Classics including Roubaix. His son (whose name escaped me in a cloud of smoke and beer) proudly told of often sitting in the front seat of the family car between dad and Le Professeur on their way home from a race, and Sherwen regularly staying at their home during the Tour. By the time I went and fetched Frank to be regaled with such awesome stories, the son had disappeared into one of the frequent conga lines that punctuated the night. C’est la vie.

A particularly cordial mademoiselle decked out in a sweet Motobecane jersey told me that the surrounding area was “like 95% of Roubaix is”, which I took to mean not very glamourous. I also got the impression that every Cycling fan in town was assembled in this tiny enclave on the night, and that this kind of entertainment wasn’t typical of what you’d find on any other Thursday night in town. The band was unlike any other you’d find anywhere, ever. Les Chattes Patates (a ‘plow potato‘) were a cross between Monty Python, the Raleigh TI team of the 70s and Weird Al Yankovich. On acid. With instruments and tiny bicycles. There was definitely a sense of “what the fuck” among our crew, we couldn’t understand anything that was being said or sung, but we spoke the universal language of Cycling, guitars, punk rock riffs and Ramones-esque posturing. Every now and then I’d pick up a shouted “Loison Bobet”, “Le Blaireau” or “Pou Pou Poulidor” and sang along accordingly. All the while the band was churning out yet another rapidfire rhythm, a poor sod dubbed “Monsieur Sir Weegins” turned the pedals of a bike with a too-low seat on a home trainer for reasons still unknown.

Once the madness on stage and the conga lines had subsided, the entertainment turned to the four-way stationary-bike races. With a raft of drunken, loud coaxing from the KT crew (well, Frank) each of us took our place on the rickety singlespeeds mounted on even more rickety trainers to see who could move the little coloured bikes in the middle of a giant wheel the furthest. Vo2 maxes were pushed to levels not seen all week on the cobbles, and legs that were only hours earlier crying for mercy were now being subjected to 180rpm three-minute intervals by brains that were operating at levels well below normal capacity. When Ms Motobecane saddled up and demanded some competition, those who were reluctant to punish themselves just minutes before were now fighting for the last too-small or too-big bike with renewed vigour. Hearts raced and brows became beaded with sweat, and that was before a pedal was turned in some vestige of enthusiasm, as much as could be summoned at 11pm in a drunken haze.

As we reluctantly stumbled back down the corridor at the behest of Alex, gleaning one last cigarette from Ms Motobecane and almost forgetting to gather the V-Flag from the corner, I pulled back the lapels of my jacket and proudly revealed my tee-shirt a final time. Merci Roubaix. For you may be a shithole on the outside, but deep within beats a Cycling heart that few can match.

55 Replies to “Roubaix: Anatomy Of A Shithole”