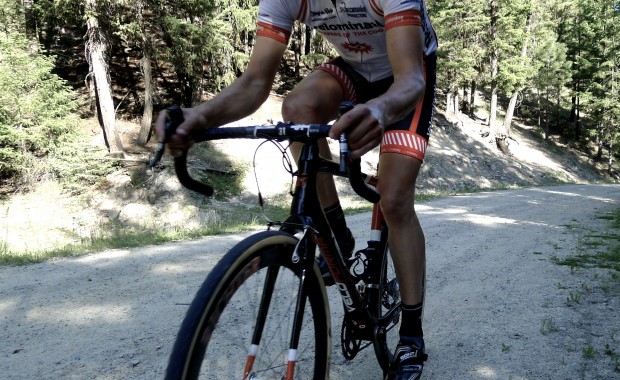 I suspect that whoever first put a set of downtube shifters on a bike immediately knew that while it was superior to having the shifter on the seat stay, it was a design that was going to be improved upon. Not only did it require being seated to shift, it also required taking your hands off the bars. Shimano got close with the introduction of the STI shifter in the early bit of the 90’s, although the decision to allow the brake lever to pivot laterally was a fundamental flaw.

I remember the first time I saw a set of STI levers in person; I was at County Cycles and they had a complete set of Dura Ace 7400 in the box. It was a truly beautiful groupset, and the metal details on the shifters were as stunning in my hands as they were glinting sunlight off the Pros as they crossed countless finish lines with their arms aloft. The price point was well out of reach, and so I dove headlong into various experiments to find a way to get my shifters on the bars.

Bar-end shifters didn’t look cool so they were out, full stop. I first tried Grip Shift, which was a complete disaster, partly because they didn’t shift well, and partly because they required twisting the bars and invariably introduced a terrifying wobble toward either traffic or the ditch. The low point of my experimentation involved mountain bike thumb shifters mounted near the brake levers, but I couldn’t get them positioned in a way that I could reach them. Cue more wobbling into traffic. Finally I got a set of Suntour Command Shifters, which were basically double-ended thumb shifters that were mounted at the brake lever. These might have worked well, except I couldn’t afford a Suntour rear mech, and the Command Shifters couldn’t get along with my Shimano 105 drivetrain. I had no alternative but to set those shifters to friction, which meant even more wobbling about as I tried to coax it from one gear to the next. But being unsuccessful didn’t mean it wasn’t fun, and when Shimano finally released a 105 STI version – which I could afford – I was that much happier to finally realize my dream of having functional handle-bar mounted shifters.

I’ve never liked the lateral pivot off the STI system, though, and once I could afford to, I moved to Campa and their superior design of incorporating a Go Button along with a paddle shifter. Campagnolo, for all its beauty and functional flawlessness, does require some coddling. It doesn’t particularly like being dirty, and I find myself tweaking the cable tension a few times a week – just a fraction of a turn – to keep it perfect. Because a perfectly tuned Campa drive train runs more perfectly and more silently than anything else – and the Principle of Silence holds sway over all else.

When it came time to building up my Graveur, I never seriously considered Campa because doing that on a bike intended for taking regular mud baths demands something less finicky. And I really don’t want my brake lever wobbling about as I’m trying to control a bouncing, bobbing machine on a twisting gravel or single track descent. Shimano was out, which left me with the choice between Command Shifters and SRAM. SRAM it is, then.

It took me an age to get used to how to adjust it, and how to shift. It requires a lot less cable tension than Shimano or Campa, a trick that took me a while to discover. Upshifts are totally awesome – tap, tap, tap and the chain just drops down along the cassette irrespective of mud or sticks or whatever is in there. I found half a tree trunk in my cassette after my ride this morning, and it didn’t adversely affect the shifting. The front shifting is absolutely blazingly fast, once you get the thing adjusted correctly. And the hoods themselves are very comfortable, possibly even more so than my 10spd Ergos.

But to this day, I still have to think about downshifting (push, *click*, push a bit more, *click*). And Merckx forbid I try shifting more than one gear at a time – I’ll invariably lose track of my clicks and wind up air-shifting between cogs. That’s going to inspire some new curses in a race situation, so there’s that to look forward to.

163 Replies to “The Bro-Set Experience”