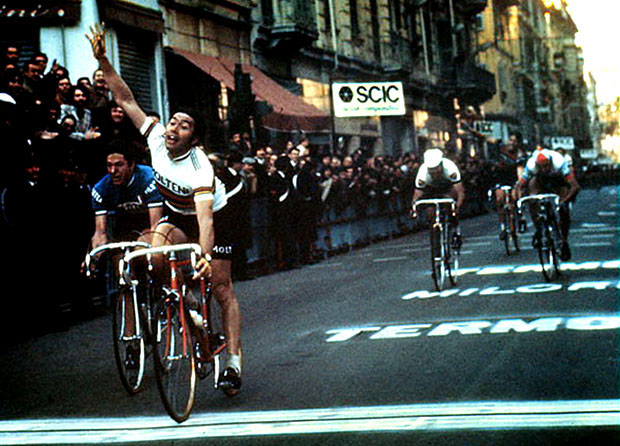 Winning salutes are brought up from time to time here on Velominati.  Of all the images and memories we have of cycling’s greatest athletes, many are of champions crossing over the finishing line in their winning pose.  A rider’s salute as he or she crosses the finishing line first is not of insignificance.  This is how they celebrate a long deserved winning break, sprint, or climb.  It represents the culmination of years of training and the realization of a lifelong goal.

The salute says more though than just “I win”.  It can say a lot about the rider employing it.  Take Pantani’s crucifix salute as an example: 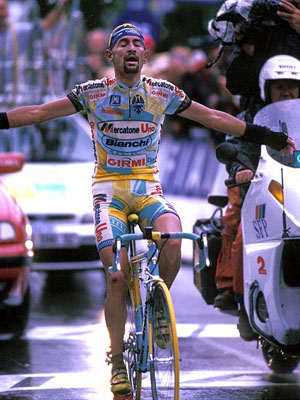 What does this say about Il Pirata?  Does the Jesus-pose portray his ego and a sense of himself as some sort of exalted cyclist?  Maybe, but I doubt it.  Perhaps it broadcasts the iconic imagery of his Roman-Catholic up-bringing  and displays it in a way many of his Italian countrymen can identify with.  Who knows?  To me, this photograph is art in the sense that we take from it what we see in it as individuals. What this salute imparts to me is a sense of calm after the storm.  It is a letting go of sorts, sublime catharsis, freedom.  I see a figure that is truly in the moment and aware of nothing else, not even himself.  It is beautiful and exemplifies the rewards of our sport. Rewards which can only be reaped through dedication and effort. It also illustrates Marco’s awareness, conscious of it at the time or not, of the elegance of cycling.

Contrast that to this: 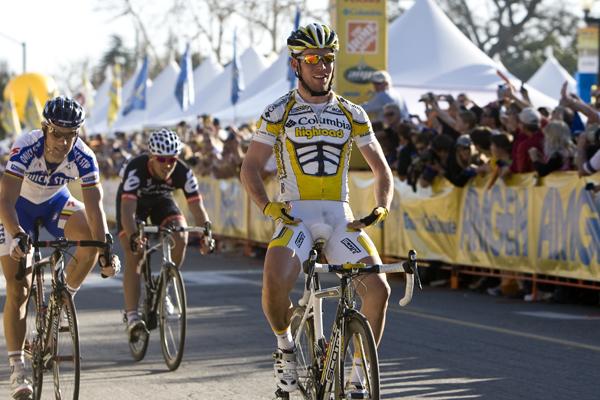 What of this man of Manx and what he’s trying to put out there with this salute?  A chamois was included with my bike shorts?  Hey everyone, my sac’s down here too?  Or, this is titled “Ballerina Pose On Bike”? I am the “Total Package” and will take all comers in the octogon?  It may portay the effort and dedication but certainly comes nowhere near elegance.  Hell if I know what is says, other than “Cavendouche”.

So what’s a good salute?  It’s hard to say as there are no Rules governing the salute.  So, I’ll submit the following:

A cool salute should:

-Convey the rider’s commitment to cycling, extended effort, and pleasure in winning.

-Dispense with any sort of pantomime, weapon imagery (two links there), or baby toys.*

-Show some class and deference to the history and beauty of the sport.

Maybe it’s easiest to characterize a cool salute similar to how politicians describe pornography.  It’s hard to define but you know it when you see it.

*In all fairness to myself and to avoid contradiction, I realize that the last link regarding baby toys speaks volumes about the rider employing the pacifier in it and that it is probably about as elegant as that rider can get.