It starts with a casual observation. You hardly even noticed when it happened, but something shifted in your mind. A bit later the same observation is made again, this time in a slightly different context. It happens again and again and the observations layer atop one another like sheets of tracing paper that, when flattened together, form a complete picture.

And so, having gone almost completely unnoticed, an obsession is born.

My obsession over classic-bend bars has been developing slowly over the last two years or so, fueled by three principle factors (mimicking the pros, form, and function), and buffered by another (investment).  The fuel for the fire included the observation that many of my favorite pros ride classic-bend bars, the FSA K-Wing bars I was riding didn’t allow for a very smooth routing of the cables from my Ergo shifters, and I was not satisfied with the quality if my shifting. On the other hand, I liked the scalloped area that the K-Wings offer, and I was reluctant to move away from a bar that I spent quite a bit of money on, especially for a bar that would also represent an investment and which I wasn’t sure I would like any better. However, those same scallops caused sharp bends in the cables which adversely effected shifting performance. Not to mention, I haven’t seen a pro riding K-Wings since, well, ever.

The classic-bend bars have been weighing heavier and heavier on my mind recently; my shifting has never been as good as I think it should be, and I have become increasingly convinced that the problem was the cable routing and that classic-band bars would likely resolve the issue. Also, both Brett’s and Marko’s latest build projects involved classic-band bars, and I love the look they offer. Add to that to the fact that I’ve recently grown especially tired of the angular look of the K-Wings, particularly in marriage with my 17-degree stem, and you’re asking for trouble.

Yesterday, a flurry of text message exchanges with Marko over bars sent my obsession over the precipice. That, combined with a particularly frustrating day at the office turned obsession into action; the Hand of Merckx guided me into a chance meeting wherein I ended up with a like-new 3T Rotundo Pro bar for less than half the retail value.  No shipping, no waiting, just good-old-fashioned instant gratification. Impulse buy satisfied and bar experimentation available at a palatable cost, I disappeared into the basement to labor on my machine for a few hours to install the new bars.  And, although rainy weather today will keep me from riding Bike Number One, shifting performance on the work stand showed a considerable improvement in the crispness and speed of the shifts, and sitting on the bike in the workshop seems to validate that the classic bend is indeed very comfortable. Both of those test seem pretty conclusive, obviously.  And, most importantly, it looks Pro. 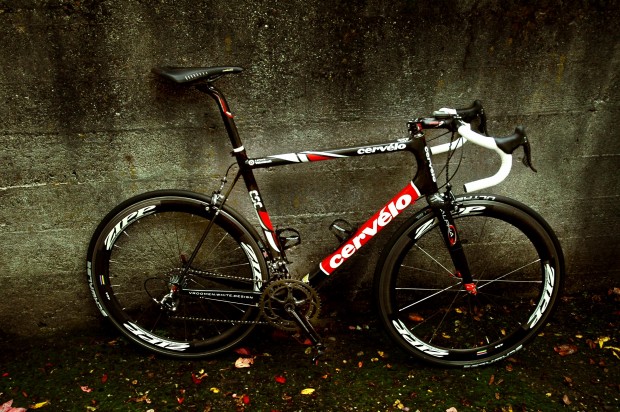