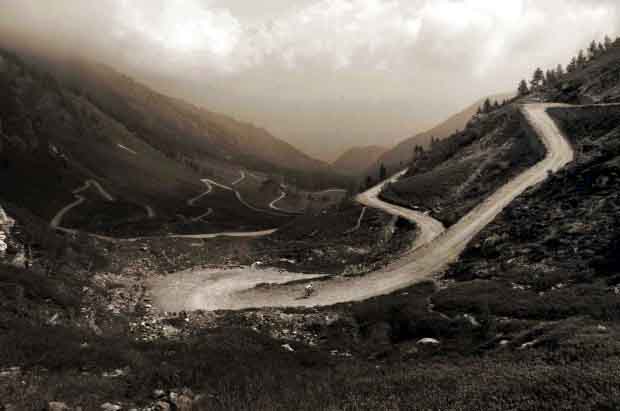 As cyclists, our legs bristle with anticipation at the sight of a hairpin turn.  Stitch a series of them together in close succession, and we lose the ability to speak in complete sentences.  Show us a road that resembles a goat path, and we start to wonder aloud in fragmented sentences what it might be like to send a bunch of racers up it.  Combine those things, add a dirt road surface, and we’re sporting serious Climbone.

A few weeks ago, our friend Roadslave queried us as to what climb was featured in some douchenozzle’s photograph at an art show.  Not surprisingly, we were collectively able to nail it down in fairly short order, despite the considerable disadvantage of the photog himself having mislabeled where and when the photo was taken.

Attention to detail is what we do as Velominati, and many of us have gazed upon most of the famous climbs in Europe – if not with our own sweat-drowned eyes, then at least through the lenses of photographers who have (and were hopefully more successful than Roadslave’s pal at naming the time and location of the climbs).

I came across this photograph today and was instantly drawn to it for obvious reasons that don’t need to be restated from above.  But it also gave me an uneasy feeling: I wasn’t sure what climb it was.  A few minutes later, by chance, I came across a more modern and labeled version of the same climb and thought I’d test the collective knowledge of the community with a little challenge, which I have every confidence will be met in short order.