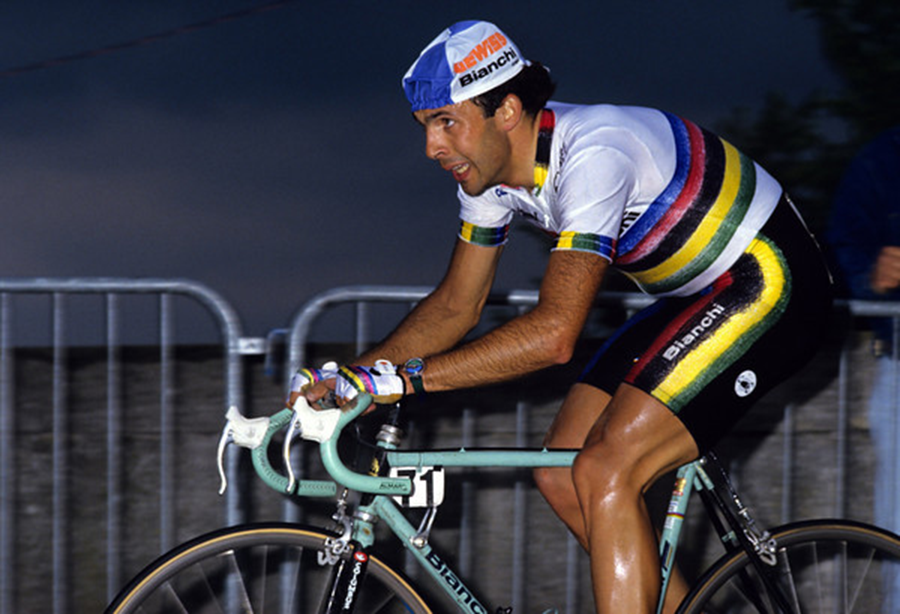 I’ve spent my adult life believing that Mario Cippolini was the first rider to soil the Rainbow Jersey with matching bibshorts. Granted, Super Mario could pull off even the worst soilings with the most possible class, but nevertheless it kicked off a trend of matching bib shorts to jerseys – which is something I cannot abide unless they match because they are both Spinal Tap Black. (Interesting bit of trivia: the UCI fined Super Mario for riding in yellow bib shorts when he wore the Maillot Jaune for the first time in the late 90’s; the UCI recently threatened to fine a Tour leader for wearing team-issue shorts instead of yellow ones provided by the organization. True story, unless I made that up in a convincing dream which now feels like a real memory.)

Like all true stories, this Lion King kit pioneering tale also turned out not to be true. Moreno Argentin makes a liar out of me by wearing a pair of shorts in 1987 that not only shows what I believe was the first step towards over-matched unitards, but also demonstrates the most significant best reasons why the 80’s were an awkward time for kit design:

This picture of Argentin brings into sharp focus our inherent desire to have every bit of clothing match every other bit of clothing in some sort of couture infinite loop. Every advancement in technology is probed to explore the limits to which it can help us achieve this. ADR, Super U, Carrera, and RMO are just a few examples of designs from the eighties that stood the test of time, but there have been some significant missteps as the sport explored the possibilities of newfound graphical technology.

It wasn’t that Mario was the first rider to come up with the idea to overmatch his kit; he was just the first one to have the nerve to wear the resulting abomination outside his dressing room.

87 Replies to “The First Step”