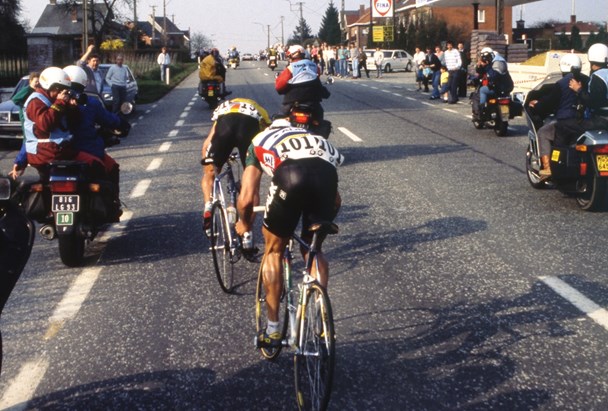 Anatomy Of A Photo: The Last Chance Saloon

Bicycle racing is a strange beast. Some races are over before they’re even a third completed, any mystery of a victor negated by methodical displays of team riding and tactical strangulation of opponents. Other races are so hard to pick that to even attempt to is committing VSP suicide; yet still we pick. For three weeks out of the year, racing in France can be pretty predictable, yet for one day of the year it’s the most exciting time on the calendar. We don’t know who’s going to win that race until the end. Sure there are favorites, but those favorites can’t just sit there and control proceedings for six hours, let alone for three weeks. That’s the beauty of Spring Classic racing.

This hill, if you can call it a hill, more like a false flat, a little ramp, a gentle bump, is likely the final opportunity for he not wanting to contest a sprint, to get away and solo in, if any previous attacks on the cobbles haven’t stuck… this is the puncheur’s, the rouleur’s, last chance saloon. The better sprinter will wait until the very last moment to pounce upon his weakened prey, like a dentist on the savannah.

I don’t know who these two 80s studs are, actually, but I would hazard a guess that Monsieur Yellow is probably the lesser sprinter, especially if the knotted guns of M 101 are any indicator. Maybe the attack stuck, and M Yellow got to cruise to the line without stress, and blew kisses to the adoring masses, soaking it all in. Maybe 101 hung on for grim life on the last kilometres of the nondescript, straight road and came around late, winning by millimetres.

I really don’t know. And that’s how I like my racing.

64 Replies to “Anatomy Of A Photo: The Last Chance Saloon”