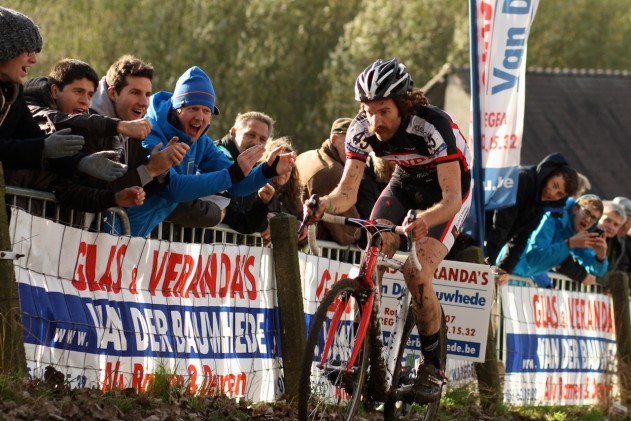 Cyclocross could be the most perplexing of all the cycling disciplines. To me it’s at once the most beautiful and the most unappealing. The beauty comes from the great European races, and of course by ‘European’ I mean ‘Belgian’. The lack of appeal stems from the fact that I just don’t want to do it. It looks hard.

Watching the pros ply their craft is one of the great spectating pleasures. Though all I have to go on is the online coverage of the races, you get a sample of the full sensory experience that comes from a cold, muddy field full of drunken, baying fans yelling their lungs out in what could only be an attempt to ward of frostbite by clapping and jumping up and down for an hour, before retreating to the bar from whence they came to thaw out and top up the already well-stocked beer reserves. Then there are the riders, who sometimes might feel relegated to bit players in the big show, but in reality are the stars, the heroes, as well known in the motherland of cross as a TV soap star might be in the Colonial backwaters. The skills and fitness of these riders is, I think, superior to any other type of competitive cyclist, full stop.

To be able to go from a standing start, after waiting statically for five or ten minutes in sub-zero temperatures, to sprinting at maximum heart rate, then sustaining it for an hour is truly impressive. Not only that, but to ride those inappropriate machines in those crapulous conditions takes a special character. It’s like someone handed you a bowl of dishwashing liquid and an apple and told you to knit a cardigan with it. Skinny tyres, drop bars, shit brakes, off-camber corners, sandpits, fucking running for god’s sake, it’s everything that should be kept well away from each other thrown into a blender and force-fed to you, and you’re expected to give the thumbs up and a “ooh, that’s delicious” appraisal. It’s fucking ridiculous.

I was talking to friend and Kiwi cross champion Alex Revell over beers last week, and asked how crazy the crowds were and what the tunnel of noise that the riders must navigate is really like. He responded with a look of “well what the fuck do you think it’s like?” before more diplomatically answering in his dulcet manner. “It’s just crazy, it’s so loud it hurts your ears and gives you a headache.” Alex is used to probably more support from the mad Belgians than most backmarkers at a World Cup are accustomed to. After scraping up enough money for an airfare, he threw himself into the Euro ‘cross scene right at the deep end. Armed only with one bike, a bit of free kit and the moustache from hell, he stood out like dog’s balls. Who was this fool from New Zealand with handlebars on his face wider than those on his bike, slipping and sliding around just waiting to be lapped out? He’s our new hero, that’s who!

Back here in Wellington, he can walk down the centre of town and he’d be regarded as just another young guy with fancy facial hair. In Belgium, he’s mobbed for photos and autographs while trying to buy bread. And that’s why I believe cyclocross is a paradoxical discipline; I can sit and watch this year’s men’s World Championship race over and over, and marvel at the classic battle that unfolded. I’ll study the Svenness and Like A Vos videos and get much pleasure and insight from the race analysis that they provide. I’ll go to the local races and heckle my mates as they roll around a park for an hour and I’ll have a great time. But when they repeatedly ask “when are you gonna come race?” or “why don’t you get a bike?”, well I just want to slap them around the chops and ask my own question: “Do I look fucking insane?”

I just don’t see the appeal of pinning myself to within a whisker of a heart attack, on a bike that is sketchy enough just riding on a flat, smooth surface, on terrain that has no appealing features like corners, descents, roots or rocks, in the middle of winter while wearing a diaper filled with what equates to wet sandpaper. I can do that at the local Gentleman’s Club, thank you very much. But damned if all my mates, who ride all forms of bikes, aren’t hooked like junkies on this odd drug. Maybe I’m afraid I’ll get addicted too, such is my personality.

So I’ll resist as long as I can, and keep my belief that cross is fantastic to watch when done by pros in Belgium, but a little bit wrong when done by me, at the wrong time of year in the furthest part of the world away from where it belongs.