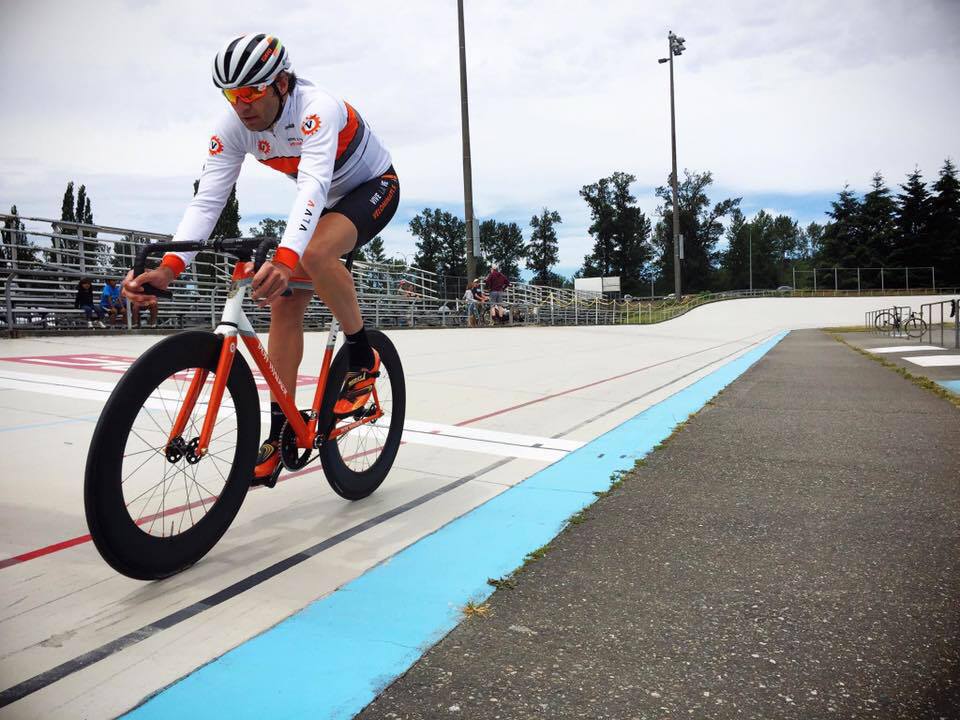 It might have been adrenaline or it might have been enthusiasm, but it was probably overconfidence in the belief that I could go full gas for an hour that had me tapping out a beautiful, seductive rhythm during those first few minutes of my effort at The Hour for Festum Prophetae. As those first laps ticked away, my focus was complete; I saw only the black line with the Sprinter’s lane and the Côte d’Azure framing my field of vision. The perpendicular lines where the slabs of concrete make up the track passed under me like ballasts on a train track. The effect was all-consuming as I felt my legs spinning smoothly and powerfully while my lungs processed litre upon litre of air.

It was just before turn three on an anonymous but early lap that the feeling swept over me. It was that unmistakable feeling when the shadow of fatigue sweeps by like a bird swooping overhead. I wasn’t tired yet, but the momentum had undeniably shifted; something intangible had changed that signalled the suffering that was about to come.

Over the next few laps my focus shifted from the ballasts to unconvincingly convincing myself that I was mistaken in sensing that harbinger of Fatigue Doom. Yet now I noticed the headwind, and I noticed how it seemed to slow me down much more than the tailwind sped me up. The fixed gear was a liability at this point; my muscles were weakening and there was no option to downshift for the headwind and upshift for the tailwind. It was all a cruel game against momentum. A game I sensed I was starting to lose.

It always seemed we would be gambling with the weather; rain had been forecast but the skies were beautiful and clear when I awoke. As I warmed up, the clouds were slowly creeping in. Just before I set off on the effort officially, @Owen announced that the rain was predicted to arrive 50 minutes into the effort. Rain on a velodrome is a dangerous thing; it reduces friction and causes a bicycle to slip from the banking, which will come as a surprise first to the rider and then to the audience.

I have a voice in my head that questions me. Incessantly. Like an annoyed parent, I have tried “grounding” this voice and taking away its iPad, but the little fucker is monumentally insubordinate, not to mention devious; just when I think I’ve got him locked up securely in the basement, it picks the lock and escapes again.

So there I was, for three-quarters of an hour with an escaped convict, my Questions Voice. When the rain started to fall, it started chatting about this being the perfect excuse to stop riding early. Still I kept on. I had put in something like 50 minutes already and I wanted to see The Hour out, irrespective of the suffering and the overwhelming desire to stop. Then both wheels slipped off the banking; first the back, then the front came down to join the party. Thankfully I was low on the track near the black line and it wasn’t a long enough trip to cause me to crash; but on the next time through the start/finish, my coach @Haldy yelled, “If you’re slipping, pull out.”

That was all I needed to hear. I wanted desperately to stop already, and I’d been thinking up a good excuse for ages. Having someone tell you to stop because it would be dangerous – irresponsible even – to continue is the perfect reason to give in.

Before the bike had even come to a stop, I regretted it. Fifty minutes and change of comprehensive suffering, and all of it for nothing. Sixty minutes is the mark for The Hour, nothing less and nothing more. It is both its cruelty and its beauty.

I suffered, but I didn’t earn the satisfaction of knowing I suffered to complete a goal. I was already behind my goal pace, and quitting makes it easy to tell myself I could have made it anyway, that I would rally in the last 10 minutes to make it up. But I didn’t, and I wasn’t going to. I quit.

I will go back to the track in a few weeks’ time and do The Hour again. This time, with good weather. This time, I will finish what I started, however much I suffer again and however far behind my pace I am. Rule V.

76 Replies to “The Quitter”