Rule #31 was conceived out of necessity, aesthetics and plain good taste.  Seeing an oversized saddle bag hanging limply by velcro under a Flite, Arione or Regal just isn’t right.  Frame pumps, while they undoubtedly do the finest job of inflating a tube, add nothing but bulk and clutter to the lines of a frame (and aren’t compatible with the majority of curvy, plastic frames prominent today).  While a folded tubular held under the seat with a Christophe toe-strap may have been de riguer and kinda cool back in the day, running tubs nowadays is not only uncommon, but an exercise in futility should one ride on any road less smooth and glass-free than a baby’s bum.  So you see, Rule #31 was a no-brainer.

But even this most important of Rules has its drawbacks;  stuffing the three pockets of your jersey can leave you looking like the Hunchback of Notre Dame, albeit with the hunch on the lower back, and more akin to a series of tumours across the hips and lower spine.  Not a pretty sight.  My usual pocket-stuffing routine would entail a tube and tyre levers bundled together with a rubber band, stuffed in the middle pocket, with a mini pump accompanying it. The phone would go in the right hip pocket, along with a camera (if there were to be some photo ops along the route, or blatant bike porn shots) and gels and bars in the left.  Any extraneous clothing shed en route (arm warmers, cap, gloves) would then be forced in wherever they would fit.  If a jacket was required, then all hell would break loose.

But recently I happened by chance upon an item that has made my life, and my riding experience all the easier and clutter-free. Lezyne products were having a season launch of their new, cool gear, and everyone attending received a free gift;  in my case, I was handed the Caddy Sack, a simple PVC pouch.  Inside was a metal patch kit with glueless patches, and a pair of mini tyre levers.  I took it with a degree of dismissal, thinking it would just end up in the pile of superfluous bike crap scattered around my house. But I decided I’d see how much I could load it up, and was surprised to find that it holds a veritable shitload of gear.  There’s room aplenty for a tube, levers, patch kit, multi tool, card wallet and phone.  But if I want to, I can easily ft in another tube, a bar or two and a couple of gels.  And it fits with ease into the middle pocket of all my jerseys, especially the sweet V jersey which is always the go-to garment of choice.  This leaves the two outside pockets with more room than ever for whatever the ride requires from the aforementioned list-of-crap-one-may-carry. 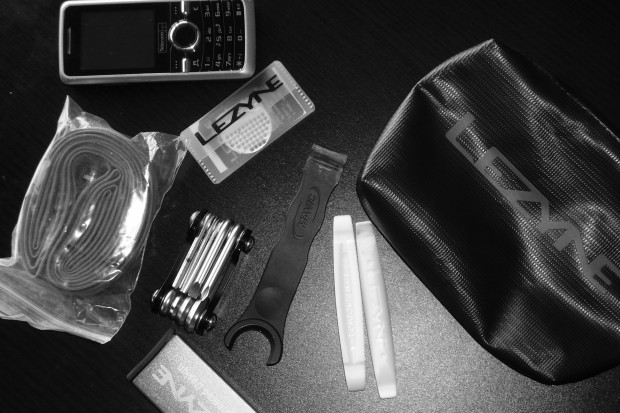 Sitting alongside the 31 Sack is always the best mini pump I’ve ever used, the Lezyne Pressure Drive M (for medium).  Why is it the best?  Just look at it!  It’s sexy, yeah, but for such a small unit it packs plenty of air into each stroke, and I can get a geniune 100PSI into my tubes during any roadside repair.  But the best feature is the flexible screw-in hose, which eliminates the chance of breaking off the screw-on end of Presta valves, as has happened to the best of us when vigourously hacking away with a fixed-head pump.  C’mon, admit it, you’ve done it.  No more chance of that with this little beauty.  Quite simply, it rules (31 especially).