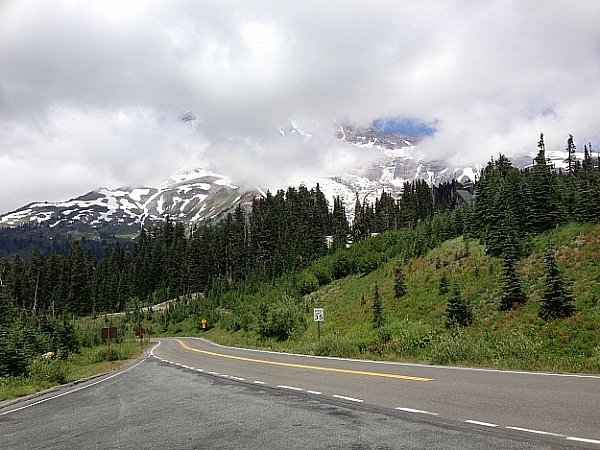 Yes, we got piss drunk after the 2012 Seattle Summer Cogal and dreamed up the V-to-V Stage Cogal: epic riding, vertical, a real challenge. It was indeed all that.

Sadly, there was one element missing: @eightzero on the road. Turns out I had made all kinds of plans for individuals to serve a Director Sportif. And each and every one of them fell through. Thus, the DS befell to me. Not that I’m complaining – I actually had a grand time. I just couldn’t ride the Cogal route myself. Considering that I am exactly Too Fat to Climb, it really wasn’t much of a sacrifice. I brought the Fucking Bike just in case, but also brought along the Wild Turkey. You know – for an evening snack.

Quote of the Cogal: “Descending is like sex: my skill at it has no relation to how much I enjoy it.”

A few of the takers weigh in:

Day 1, V1, Mt Saint Helens. Seriously, everyone needs to put this ride on their bucket list. You head up from Packwood, Washington out to the Volcano through the blast zone. The quality of the ride itself is already a reason to do it – fantastic climbs, great descents, good road surface – but the scenery is off the charts. The Pacific Northwest is packed with (active) Volcanos, all lined out in a chain along the coast. At certain points on the ride you have a great view into a handful of them, including one view where you see Mt. Rainier, Mt. Adams, Mt. Hood, and Mt. St. Helens all at the same time. Off the hook.

@Mrs PeakInTwoYears took off on the run-in to the first climb and did a super domestique pull on the front from which she pulled off as soon as we hit the climb. @G’rilla assumed that means we were racing, so took over from her and buried the pin on the first climb. Or, shall I say, for about 300 meters before deploying the Schleckchute and ejecting out the back of the group.

Naturally, the rest of us kept going. Hard. We rode hard for all of the 170 odd kilometers and I was seriously feeling the burn on the last faux plat up to Packwood on the return ride in. Any misfire of any nerve would have put me into a full body cramp. I shouldn’t have tried to do that ride in Rule #90 mode.

Day 2, V2, Mt. Rainier. Another stunner. This time with a much larger group as Keeper Jim brought his groupies with him. Those assholes hadn’t ridden the day before, and they were acting like it. Some distance from the top, I let them go to suffer in the peace of solitude. A while later, I had a mechanical just as I was about to reintegrate the group. It was better that way.

The Man with the Hammer spent his due time with me, and I thanked him for his visit. Then he headed on up the road to see who else was worth visiting. G’rilla came by a while later and set a strong pace up the road. I let him go as well. Away he went, farther, farther, farther. Then closer, closer, closer. It was obvious who the next victim was. When I passed him he was pulling over and digging in his jersey for a magical morsel that would stave off another blow. Good luck, I’m off.

The fast boys killed it, and were already eating lunch by the time I waddled up to the top. Amazingly, Lance and Nick both rode off the front. I hate them a little for killing my “I rode both days” excuse.

Massive thanks to @eightzero for pulling off such a great ride, and for his excellent organizational skills – not to mention DS’ing the whole thing. Excellent work, mate.

First and foremost – It was a privilege to ride the V to V Cogal: The Mountains were tough, but the Velominati were tougher.

When at the last minute no driver was available, Eight Zero, stepped up and performed the duties of Directeur Sportif with dignity and panache, aided by my VMH’s contribution of V-musettes.  Every time I thought, “Oh shitfuckdamn, I’m out of water again, you were around the next bend waiting for me. Chapeau mon ami!

V-1 was awesome in every sense of the word.  A fast train down 20 Km of highway 12, and a quick jaunt through pastoral meadows quickly resolved into the first pitch, where the climbers were sorted from the rest.  “Good bye Nick, Frank, G’rilla – See you at the top.”

After miles of sub alpine forest, pushing through the saddle at Independence Pass revealed the volcanic blast zone – a blast zone whose devastation closely resembled that of my legs and lungs.  It was truly awe inspiring.  A long down and a longer up finally got us to the Windy Ridge Interpretive Site overlooking Spirit Lake hundreds of feet below.  After photos and food, we were again on our way.

Frank’s creative descending line kept us entertained and on our toes. Later, what began as a cooperative pace line back to town became some sort of leg ripping contest from which the weak were systematically winnowed.  Ironically, Nick and Frank were too deep into their blood lust to even see the town line, let alone contest it.

It was here that things took a turn.  Over celebratory pizza and beer, it was revealed that on Sunday evening there would be no keg of beer at Paradise Lodge as advertised, and that Frank, G’rilla, and Eight-zero would depart immediately after the climb on Sunday afternoon.  Well, so much for the Sunday night Coganalia…  guess we’ll have one on Saturday instead! Beer at the pizza joint, led to beer at the Blue Spruce Bar and Grill, which led to high gravity Belgian beer in the hot tub.  It didn’t seem like a good idea at the time.

It definitely didn’t seem like a good idea on Sunday morning.  Keeper Jim, Aaron, and Joe must have thought that they would have an easy kill when they saw the motley crew holding their heads at the espresso shop.   We rolled at 9:05.  You know it is going to be a hard day when you are dropped on the way to the climb.  Even with the tasty and healthy hand ups from the Keeper Jim clan, my morning was slow – embarrassingly slow.  It was also gorgeous.  At one point I was sure I was hallucinating when, while admiring the wild flowers along the roadside, I noticed the humming bird pacing me less than meter from my face.   The descent was well worth the pain up.

If I were in charge of awards, they would go like this:

If this is what a Cogal is, I want more of them: two days of challenging cycling in sublime surroundings, in the company of Good People. (By “company” I include the relation between myself and much stronger riders who are well up the road from me.)

But the best thing about this weekend for me wasn’t even the riding per se. It was watching my VMH have a great time. For the last year and a half””about as long as I’ve been back in the saddle myself””I’ve been conducting a careful, deliberate campaign to turn an inveterate mountain biker into a roadie. While I’ve gone so far as to ride a mountain bike myself, the critical components of my operation have been discriminating route selection and the spirit of fun self-flagellation that any endurance sport requires. What has been missing (since we live at the ass end of God, where shaved legs and arm warmers are as common as Emperor Penguins selling blocks of ice from mule-driven wagons) is  the company of committed, informed, tolerant, enthusiastic, welcoming, and way-stronger-than-us riders””that is, the kind of people one doesn’t meet every day even in cycling meccas.

So, then, this weekend pretty much had it all. Plus lots of beer and a respectable hangover in the middle of it. Perhaps the best moment of the weekend was driving down the Nisqually River valley, hearing her say, “I should get a Strava account so I can get mileage and elevation data for our local climbs. I could be a good climber if I worked at it.” So I’ll be on weight loss, alcohol cessation, and anaerobic threshold interval programs now, thanks to you bastards. Okay, not the second thing, who am I fucking kidding.

Thanks for a great weekend, you guys. I look forward to next time!

The benefit of climbing for hours and hours is that you get to descend for a full hour. After climbing to the top of Mt. St. Helens (where you can see four snow capped mountains at once), we snaked down glorious smooth curves in and out of forests.

For me, descending is kind of like sex. Whether or not I’m any good at it doesn’t stop me from enjoying it.

On day 2 we were joined by an all-star team including Keeper Emeritus Joshua (of the bear spray incident and Beer in the Bidon) and Keeper Jim.

Given Jim’s reputation as the evilest Keeper, I joked with Jim’s co-worker Joe about Jim being part of the mafia. Without missing a beat, he joked back that they had put some things at the bottom of the ocean, maybe even some college students.

Six hours later, back at home, I realized that he wasn’t kidding. They both work in oceanography.

And this PS from @eightzero:

Thanks again to @frank for letting us commandeer his vehicle for road support. @Jamie added custom v-musette bags. Very Pro. It worked out perfectly. On the ride home there was some discussion about the V-to-V stage Cogal becoming an annual event. Stay tuned; the wheels are churning. Merckx willing, we will bag two more of Washington’s volcanos in 2014.

(@eightzero’s photos can be recognize by how much they sucked. Seriously, what is up with your camera?)