Guest Article- An Invitation to Suffer: The Rapha Manchester to London Challenge

I have met @chris on the original Keepers Tour. He seemed like a reasonable person at the time. Then again, @rob passes himself off  as a rational person yet he signed up for the Too Much on 100 ride and completed it. People sign up for these crazy rides because it forces them to get in the best shape possible. It makes these long rides more enjoyable or less horrible or both.

But either way, you will hate your life at some point during these rides and vows will be made never to do anything like this ever again, if the sweet baby jesus sees you to the other end. But then the ride is over and you’re pretty psyched and then before long you forget how much it sucked and all of a sudden you’ve signed up for the next one. Its genius, that kind of stupidity. And speaking of stupid things, @chris is even auctioning off a jersey signed by team Garmin.

Some might say that I’ve done some stupid things in my time, which I wouldn’t necessarily agree with, but this has to be a strong contender for the most ridiculous. Manchester Velodrome, home of the mighty Team GB track team and road programmes that turned out the like of Wiggo, Cav and Geraint Thomas, to the Olympic Velodrome in London.

It seemed like a good idea at the time. How hard could it be? It’d be a great challenge that would raise money for a good cause with the added benefit that I would be forced to really train properly, cut back on the post ride recovery drink, tighten up the sprinters muscle and generally invoke more Rule #5 than I’d previously imagined possible. Along the way I’d most likely risk completely alienating my poor Velomiwidow and cause her to truly come to hate that fucking bike but all for a good cause. (Fortunately the Velominippers are largely on my side.)

Reading the blurb on the Rapha site, part of my brain must have done a great job of ignoring the bit of blurb that described it as hard riding and noted that the first climb would be Snake Pass in the Peak District. Snake Pass has been dropped from the route but it hasn’t got any flatter. There was also a nasty little hill in the last 20km that made me seriously contemplate a compact and dinner plate sized cassette for the day. Emasculate my bike or risk having to get off and walk? Tricky, but Rule #5 carried the day and the standard remains. 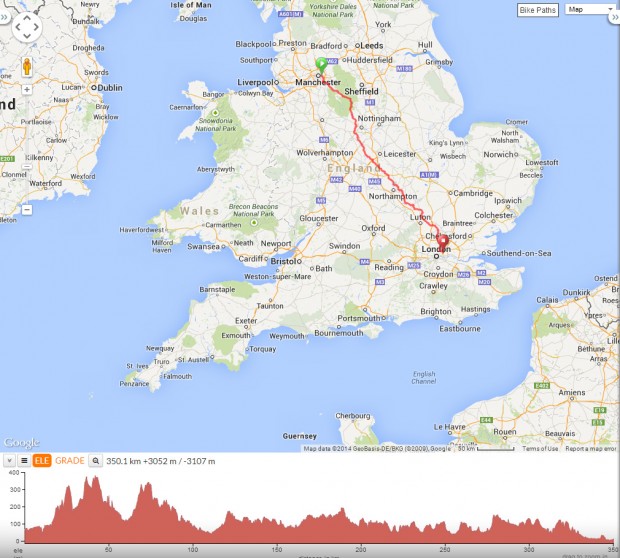 This is going to be by far the toughest thing I’ve done on the bike but it’s for a great cause, Ambitious about Autism is a national charity that helps children and young people with Autism to learn, thrive and achieve.

Autism is a lifelong developmental disability which affects 1 in 100 people in the UK. It affects the way a person communicates and how they experience the world around them.

Ambitious about Autism works to improve the services available for children and young people with autism and increase awareness and understanding of the condition. They’re also committed to campaigning for change to ensure the needs of people with autism are understood and met.

Through TreeHouse School and Ambitious Support the provide specialist education and support. If you’d like to know more about Ambitious about Autism watch this short film, read their impact report or visit the website.

It’d be fantastic if you’d go as far as sponsoring me but at the same time I get that 99% of you have never met me and are never likely too so I’d completely understand it if you’d rather save your charitable spend for someone you know and a cause that might be closer to home. There is another way, though. Jonathan Vaughters was kind enough to donate a 2013 Garmin Sharp team jersey signed by approximately 20 members of the 2013 team including Alex Howes, Christian Vande Velde, David Zabriskie, Fabian Wegman, Jack Bauer, Jacob Rathe, Michel Kreder, Rohan Dennis, Ryder Hesjedal, Andrew Talansky, Steele Von Hoff, and Tom Danielson. The jersey will be auctioned on ebay with all of the proceeds going to Ambitious about Autism* (I’ll pay any ebay fees, postage and any customs charges incurred). Just be warned, it would look awesome on my study wall so I might be tempted to bid as well! Click here for the Auction and if you do fancy sponsoring me as well, follow this link to my Just Giving Page.

Four months after signing up and a month before the ride, the truth is dawning that despite having a months gardening leave in May, I have not trained properly, I’m too fat to climb and I’ll be lucky if I’m peaking in two months. That’s by the by though, I won’t look out of place grimacing in a Rapha film and nobody will notice how slow I’m going in slo-mo.

*All of the money raised, both from donations and the Auction will got to Ambitious about Autism. The costs of organising the ride are covered by the riders and have already been paid. 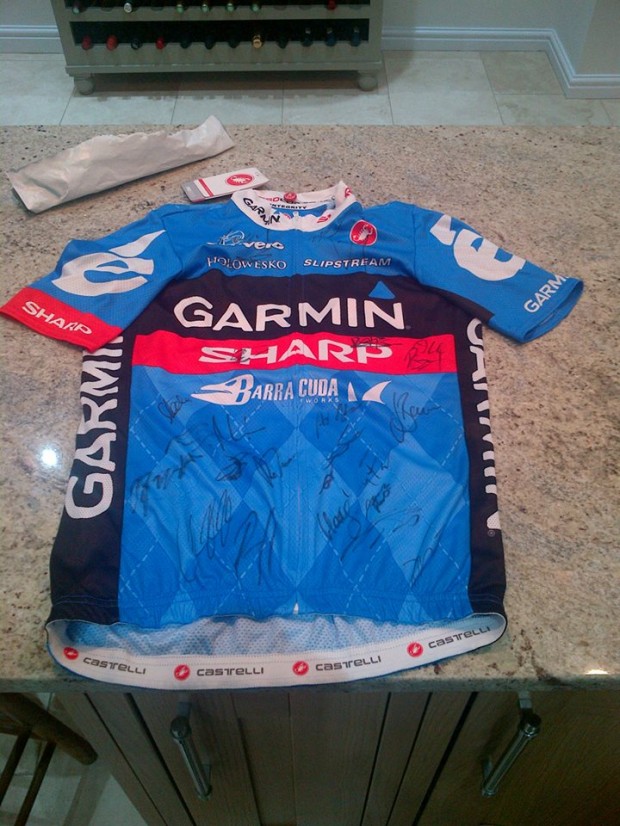 37 Replies to “Guest Article- An Invitation to Suffer: The Rapha Manchester to London Challenge”