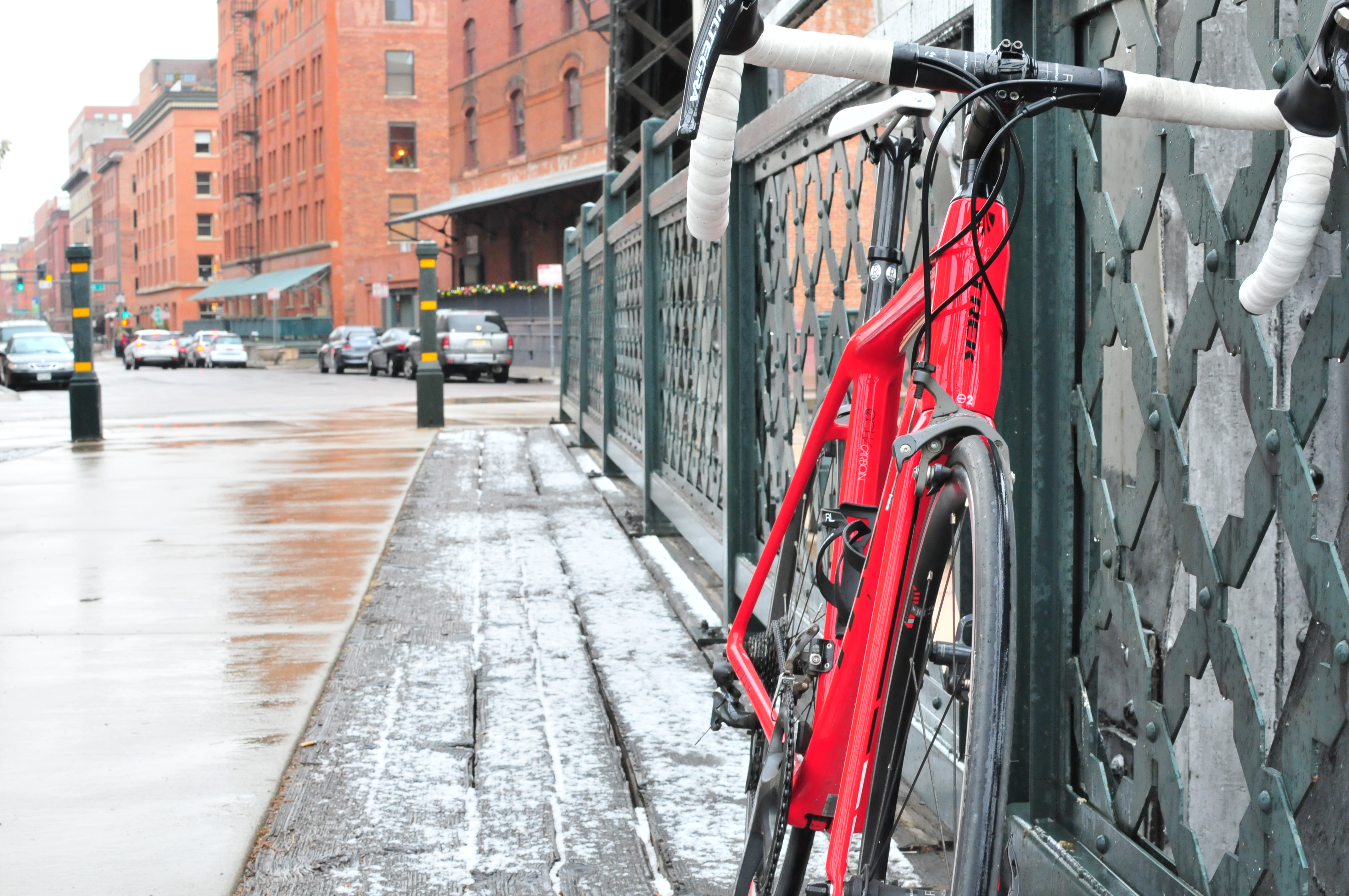 Guest Article: The Emonda and the Montello

It is important to have a steel bike and a carbon bike and maybe a titanium bike. It just is. The steel bike might not be ridden too often but it is worthy bike to ride. A steel frame will be heavier and less stiff but it will feel great. For many of us, we still have ridden more kilometers on a steel bike than our newer carbon bike and that body memory will always be there. And this glossy red paint job makes me want to ride my old steel bike long enough to strip down my carbon frame and send it off for a glossy red paint job. That is another good reason to own a steel bike. Thanks to @sboney for sending this in.

To the extent career and lifestyle have led to even a modicum of financial security there is some consolation in knowing that many of the challenges of middle age can be solved, still, with a checkbook. The aching knees and various other signs of mortality are assuaged by the credo of the baby boomer, “50 is the new 30.” And so I have found in cities like mine, where life is spent outdoors, the compensation for all this aging takes a different form that in my former abode in one of America’s largest and least outdoor friendly cities. Here in Denver you rarely see dentists in a Porsches driving around top down with shiny new wives who have recently taken vows, “for healthier, for richer, for better.” Instead our own brand of compensation for the coming unknown is usually in the form of a bicycle collection and depth of gear that leaves the twenty somethings working in the LBS muttering about the unfairness of life.

Approaching fifty I find myself with some available mad money and thankfully a cache of free time that earlier in my career had been spent preparing for Monday morning and the various requests partners and clients made that previous Friday evening. Such are the vagaries one encounters when defining, “a misspent youth.” I have found redemption in the form of a shiny red Trek Emonda SL6 which has become what amounts to my own fountain of youthiness. By who I see riding alongside and from what I hear in talking to people, I am not alone in this. The Emonda is my first experience on a carbon frame and my first time on a bike with any serious intent since my undergraduate days thirty years ago and thirty pounds ago. In the late eighties I would frequently spend five or six hours on a Dave Scott Ironman Centurion with the dead reliable Shimano 600 groupset traveling long distances quickly on the streets of Austin, Texas. The Centurion was a faithful and much appreciated companion I purchased after a short and misplaced grieving period that my student budget did not allow for Pinarello Montello. There was nothing about the Centurion save weight, and not much at that, holding me back from perfect days seeking personal bests among friends who shared my interest in helmetless bombing at freeway speeds down Capital of Texas Highway.

Still with Colorado being a biking community and me being a believer that all karma should be burned in the current life, I scanned Craigslist and Ebay for a Montello of my own in an effort to check a box that had been left unchecked. I purchased a red mid-80’s version from a fellow traveler now on the other side of knees, back, and finances where once cherished purchases have devolved into “cool stuff I seem to drag from move to move.” I assured him of a loving place in a good home and so the deal was sealed. After a thorough going through by the LBS (not doing my own work anymore is also a characteristic I have noticed in other folks of my age and ilk) I began my own personal tour of thirty years of bike development.

To put it simply cycling has come a long way but from a deservingly well regarded past.

Both bikes are a joy to ride and the Emonda in particular has been a revelation. I have never experienced such a direct connection between any effort in my legs and motion at the contact patch. There appears to be no slack, no give, and no hesitation at any level. Likewise the tapered steering has been as precise and surgical as any mechanical device I have encountered and the brakes remind me of an older 911 where the brake pedal does not move much but modulation is easy and shockingly effective. I assume those who grew up on carbon are rolling their eyes at this point but I feel a little like Tarzan flipping a light switch off and on. Less a burden than just noticeable the smallest variation in road or path travels straight up the frame. Rather than wearing I find it invigorating so I am guessing the carbonistas at Trek dialed in stiffness in a purposeful way. I usually hop off the bike smiling and clear in my understanding that this is more bike by a wide margin than I will ever be able to fully appreciate.

The Montello on the other hand has been less responsive due to frame flex (no chainstay bridge!) and its rear brake is suggestive of stopping power in a way that gives me great appreciation of those who rode it downhill for a living. Nevertheless the steel frame glides over road imperfections reasonably well and the steering is sharp and lively. I find I do not miss the retro charm of shifters on the down tube when the alternative is a trigger like flick of the index finger. Riding to work there is a ringing sound like a bell when a strap on my backpack hits the top tube. I have not tried to fix that as I find it soothing. When the temperature falls into the 20’s a more utilitarian weekday ride also causes the aluminum bits to fog up and the frame is ice cold so there is, in a sense, a connection between rider, bike, and nature, even on the streets, in a way that carbon does not provide. There is very little about the Montello that I would change other than the bar tape which was my fault and which does not fit the vintage. On a whole other front, purchasing this bike felt like an accomplishment after 30 years of some kind of ember burning. Rather than for what it does, I appreciate the Montello most for what it is. I can stare at the Pinarello after a half hour with a rag and mag polish admiring the delicacy of Italian design and the appreciation they put into aesthetics. For all its utilitarian perfection, the Emonda does not have it style wise on vintage Italian.

So today, like most days, I will drag what is left of my athletic pretensions to another ride and seek the redemption that comes from feeling the pavement move beneath me faster and more elegantly than I would be able to do on two feet. I find most of the time I ride the Emonda since I am nuts about the brakes and the thrill of its immediacy. Still the other day my wife remarked that it had been awhile since the Pinarello had gone out and I felt almost guilty. “Don’t worry,” I told her, “on every ride both bikes come with me.”

79 Replies to “Guest Article: The Emonda and the Montello”