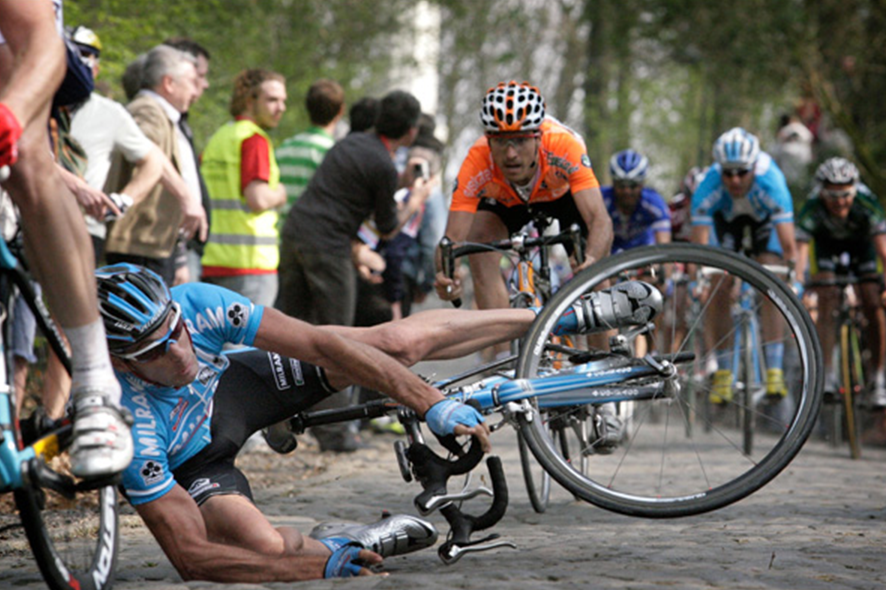 There’re two things certain in Cycling: pain, and more pain. How we attain either, each or both of them can present itself in many forms. When you take out your brand new bike for its maiden voyage, lean it against a wall at the pub apres ride and manage to gouge a chunk of paint of the seatstay when you stumble aboard after a pint too many, that hurts. Climbing a 22% cobbled wall, that hurts. The emptiness in your legs after 150km in the heat or cold and the only way home is up, yep that hurts. And crashing. That can hurt more than anything.

It’s not just the physical damage sustained in a bender that can make you cry, or want to. The longer term effects can be more painful than the actual bruises, cuts or broken bones. And when you start to think about crashing before anything has even happened, well that can fuck with your mind and produce stress that isn’t really needed when you’re already dealing with other riders, cars and trucks, or trees, rocks and roots. The Fear of crashing can be your worst enemy, and possibly the catalyst for the result you’re desperate to avoid.

As soon as Keepers Tour 15 was confirmed, two things were apparent: I needed to get into shape for the long days on the cobbles, and I needed to stay uninjured so I’d be able to ride the cobbles and possibly have a chance of injuring myself on them in April. The Fear started eating away at me. Not the fear of getting hit by one of the thousands of angry motorists with a hatred of cyclists that are encountered every week, but a fear of myself and my ability to ride a mountain bike fairly quickly; the fear of steep and technical terrain; the fear of limited traction; and the fear of a competitive nature, as I’d entered a couple of enduro races held on some of the nastiest (but insanely fun) trails in the country. Already I was mentally defeated. I had to confront The Fear head on.

Instead, what I did was give away my entry to the nastier of the races to one of my mates and Spoke mag colleagues… he was gutted at missing out, I had nothing to prove by racing it, and it seemed the noble thing to do. At least that’s how I justified the fear I was experiencing. The other race is on trails I’ve never ridden, and my plan to ‘ride/not race’ it lessens the chances of crashing. At least that’s what I’m telling myself. Being only two weeks before KT15 is a bit of a worry, but there’s still time to pull out!

So for the last four weeks my mountain bike has gone untouched. Not entirely due to The Fear, a little bit of circumstance with weather, work, festivities and building up some endurance on the road bike. Today I hit the dirt. Literally. There wasn’t much Fear involved, the ride was nearing the end and all the sensations were good. Maybe too good. I was riding well, in control and fairly pacy. On a trail I’d ridden hundreds of times before, on an innocuous corner, a small rabbit darted across the track in front of me and instinct dictated that I try and miss it. My front wheel caught the soft edge and before I knew it my KT was flashing before my eyes as I hit the rocky ground with a thud. A fair bit of skin donated to the earth and a decent whack of the head, but nothing to put me out of action for the rest of the ride or the coming weeks. Certainly nothing compared the trauma @ChrisO is going through right now. And then I remember @itburns and perspective really hits home.

As I sit here with blood congealing on my arm and a dull headache and hazy recollections of the moments after the impact, I feel that conceding to The Fear will never be wise. If we let it win, then we’d never step foot out of the house and sling a leg over any top tube, whether it be sloped and fat or svelte and flat. Risk is always there when we ride our bikes, but it’s there in everything we do every minute of every day. And I’ll be damned if I’m going to stop riding for three months so I can ride in three months.