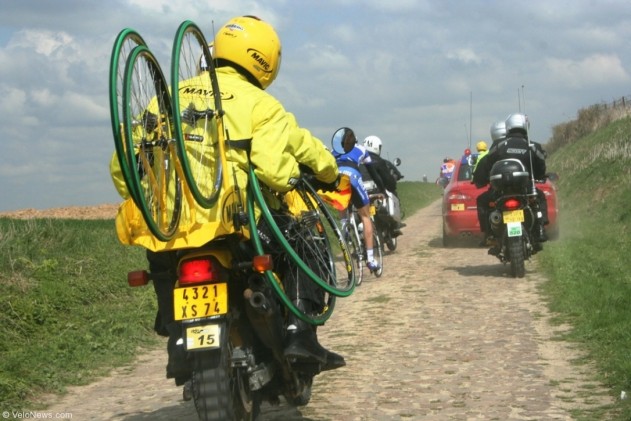 In Praise of Sealant

This was not going to be the Race of Truth. My wife and I were descending different routes to our vehicle. I was on the route with the tooth jarring pavement and tight corners, she was not. BAM! Oh scheiße, I’ve got flat rear! The tire exhaled air and water vapor in one great blast. This race was going to be either riding back to meet my wife on a completely flat tubular tire or racing to tear off a blown tire, fitting on the spare and pumping it up. The blown tire, a Veloflex Arenberg 25mm tubular, had been reborn three times and it’s center tread was worn off. I had already been thinking about replacing it so it was without too much remorse I rode it, flat as flat can be, to our rendezvous.

The next day I peeled the tire off the rim and performed an autopsy. The casing was quickly incised and the innards were laid out on the workbench. The pathology was interesting; riding a completely flat tubular tire does not shred the latex inner tube. Nowhere was the innertube stuck to itself. Looking at the tire in cross-section, there were still many miles of rubber left. I found seven discolored places on the inner casing and corresponding spots on the inner tube. I assumed these were all punctures that had been sealed. I eviscerated further and found only four actual penetrations of the latex tube. Each seal looked like a tiny stalagmite on the inside of the inner tube, who knew? The pathology report might say the patient died too young. Had the owner bothered to keep fresh sealant in the tube, it might still be glued on the rim.

I prepped for Keepers Tour 2012 by fitting some 28mm clincher tires with removable core butyl inner tubes and sealant. I did not get a flat on the Roubaix secteurs. I was probably running the tires at higher pressure than I should have so I don’t know if the sealant ever had a chance fix a pinch flat, but I was ready for it.

I was an advocate of tubeless tires before I had ever used them (?!). Then I spent too much time cleaning dried Caffé latex spew off my frame and gruppo. A puncture would seal but only after spraying latex down to 50 psi. I was not impressed until I switched to Orange Seal, which has solid bits in it, and never have I been so happy to get a puncture on a wet road and watch it seal itself in a few revolutions. There is something deeply thrilling about seeing a puncture seal while riding. There is no stopping, no sweating on the side of the road, no man handling of tires, tubes and pumps. When it works, it’s brilliant.

I switched back to tubular tires so I could ride bitchin’ carbon wheels but I didn’t use any preemptive sealant. After noticing a slow leak one morning and I added 30 mls of Orange Seal and it was fixed, tire saved. Sealant and tubular tires are a good match. If one decides to go down this road, removable core inner tubes are a must and a nice core remover will be useful. @Mauibike treats his tubulars like tubeless; preventative sealant and ride like crazy. This same argument could be made for clincher tires, especially if a person feels like they are spending too much time on the side of the road, sweating, switching out tubes and inflating. Is it a puncture panacea? No, but these new sealants work, especially when actually in the tires.

45 Replies to “In Praise of Sealant”