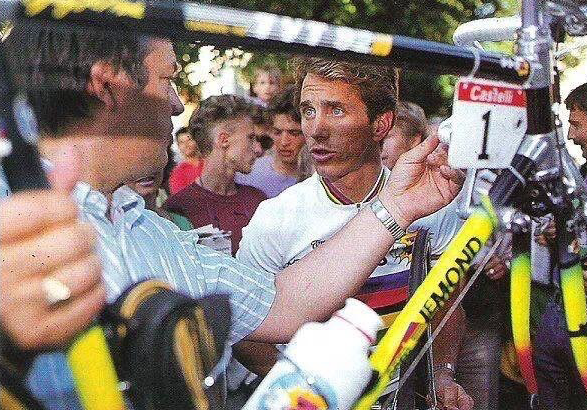 The Worlds are going to be played out on US roads, which is fantastic and the last time it happened we witnessed a great race with a worthy winner. But the Worlds has lost a lot of its prestige since moving from late August to its current position in late September. It’s only a month’s difference, but it means that the riders who started early and raced through the summer are dialing down for the season, and only the riders who either took the Summer easy or are started racing later will be interested in racing for the bands.

It used to be that the winner of the road race wore the Rainbow Stripes in the time trial events as well, because there wasn’t a separate time trial Champion. One World Champion instead of two has the sort of simplicity to it that my twisted OCD brain can really sink its teeth into, and every rider to ever swing a leg over a top tube had that event on their list – whether they were a sprinter, a Grand Tour rider, rouleur, or domestique. I would be willing to bet that a modern champion like like Chris Froome or Alberto Contador doesn’t even have the the Worlds on their radar as a career goal.

We won’t be seeing a defending Tour champion roll up to the prologue with the rainbow stripes on their back any time soon. I vote we bring back the Summertime Worlds.