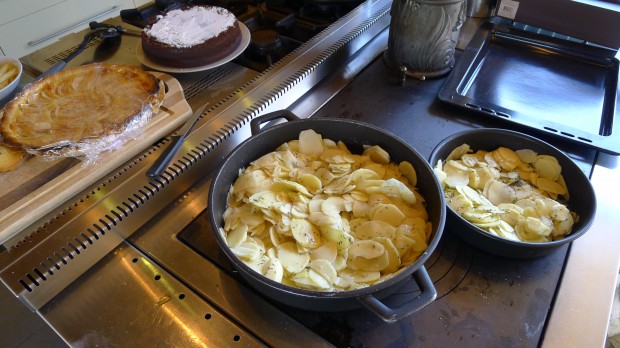 During last year’s Keepers Tour, the motor was fine for about two or three days until it suddenly sputtered and shut down completely on Wednesday. My basic problem, it appears, lies with my ongoing struggle with body dysmorphia; based on the quantity of calories rolling into the station on the Malteni train, I was loathe to lay into the vast spread of home-cooked meals our beloved Keepers Tour cook, Geneviéve, was churning out on a daily basis.

This would be idiotic for more reasons than the basic fact that I was depriving myself of second and third helpings of her incredible cooking. More critically, I was depriving my body of the nutrients it needed to rebuild after riding day after day on the pavé and bergs.

There is something about the stones and their way of knocking your bike against you over and over and over again that demands a bit more sustenance to mend the muscles than does your average Sunday roll up and down the local boulevard. This is not the time to whinge about waist lines – this is time to focus on building reserves and recuperation.

Herein lies the genius of the Pavé Cycling Classics boys William and Alex. William somehow tricked his mother-in-law Geneviéve into catering to us – two years running. I can imagine that coming into the experience blind last year, perhaps no one knew better. But that’s no excuse for this year; William must have done some serious sweet-talking in order to convince her to do it a second time. From what I know of him, I’m guessing he’s not above blackmail that involves grandchildren or bamboo shoots.

There is strength in numbers, of course, so this time around Geneviéve was smart enough not to take it on herself and somehow enlisted her best friend Odile as second-in-command. And in command they are. I used a bucket from the kitchen to clean my bike, upon which discovery they made some angry sounds and now I’m scared to make eye contact with them.

William’s cunning doesn’t end there though; he managed to cajole his lovely sister, Gemma, to agree to participate as well, though I assume the bartering of his children was involved in that negotiation as well.

Between these three ladies looking after us, we’re eating like kings and this time I’m all-in on the food. Tonight’s meal of lamb, pommes boulangére, and white beans in cream sauce didn’t stand a chance. I piled a mountain of it on my plate that made Odile do a double-take; when Geneviéve collected the plate after I crushed it, she made a gesture that said she was putting it back on the shelf straight away; no washing needed.

Moderation is not my strength. Maybe there’s a middle ground, but I’m never sure how to find those.