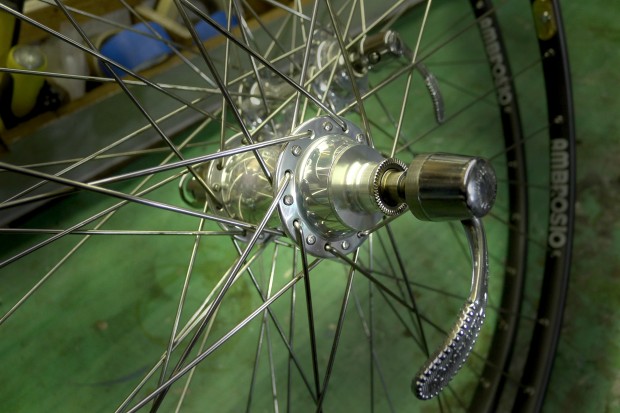 Self-awareness is a non-optional ingredient of leading a fulfilling life; while we should always push ourselves to explore new things, we should also be aware of our limitations and weigh expectations against them. This is why I avoid any activities involving intelligence or a blow torch, and take particular care to avoid those involving an intersection of the two.

Learning to work on our machines is a path any Pedalwan must learn to walk, starting with simple tasks – perhaps to tune a derailleur or brake – and progressing gradually to building the bike up from a bare frame, seeking out a Cycling Sensei wherever new skills required suggest the need of one. A bicycle is a paradox; though it is a simple machine where one can plainly see the workings of most components, it is nevertheless deceptively difficult to maintain properly. Cables and chains are things of tension and their proper adjustment requires a delicate touch.

Bicycle maintenance today is easier than it was in the past as some tasks that used to take care and skill – such as adjusting bearings in a bottom bracket or hub – have all but been eradicated from the skills needed to maintain a bicycle as loose balls, cones, and races have been replaced by sealed cartridge bearings that are pressed into place and secured with a bolt. Adjusting these old bits required a mechanical sensibility that one seems either born with or without and is not easily taught to those who lack them; adjusting modern bearings requires little more subtlety than setting the dial on a torque wrench.

Wheel truing and building is a skill that goes back to the origins of Cycling and one which continues to live on, at least for the time being. Wheels are a marvel of engineering, one made more miraculous when, like me, you don’t really understand how they work: thin, flexible spokes leave the hub at various angles, some leading and some trailing the rotational direction as they either push or pull the wheel as we force it around using a system of chain, gears, and pulleys optimistically attached to our feet.

The wheel is kept straight and round by a delicate balance as spokes are matched in opposite pairs and tensioned to distribute forces not only laterally, but also vertically. Furthermore, spokes really only have strength in tension; on compression, they fold like a Schleck in a time trial. A well-built wheel depends on a precise balance of 3-dimensionally opposing forces in tension; should the builder fail to take this into account and a critical mass of spokes fail to do the single task assigned to them, I imagine the rider will explore a sharp learning curve as they discover the subtleties of riding a bicycle which goes abruptly from two to one or zero functioning wheels.

I have no delusions of being particularly gifted in a mechanical sense. When I was a kid, my dad called me “Threads” due to my penchant for over-tightening the nuts and bolts on his cherished Campagnolo components, leaving the poor dears stripped and useless. On the plus side, I learned how to operate a tap and die. But I somehow have never been terrible at truing and building wheels; whether its my methodical approach to tasks or my love for symmetry and balance that rescue me from myself when wielding a spoke wrench, the wheels I touch leave the stand true and round – and tend to stay that way.

Wheel building is perhaps the most pure form of the art of bicycle maintenance, apart from actually building the frame yourself; it had been a long time since I’d built a wheel, so I took it upon myself to build my own set for Keepers Tour: Cobbled Classics 2012. In keeping with my appreciation of my own shortcomings, I knew I was going to need a Sensei, and there was none better to turn to than our own Oli who happens to be a world-class wheel builder. Oli unhesitatingly and generously offered answers to my many questions as I collected the parts I would need, and even went so far as to study photographs I sent him when things went awry. That, together with the wealth of information that seems to flow freely on these pages, safely led me through the process, although there were some bumps along the way, assuming you consider needing to build the rear wheel twice and front thrice to be a “bump”.

The first round saw a flawless execution apart from one significant fact: when determining on which side of the rim the spoke holes are drilled, it matters which way you’ve got the wheel oriented, and whether you’re looking up at the wheel or down at it. Keeper Jim’s two-year-old son consistently demonstrates that he understands this fact, but still it somehow escaped me.

I cleverly determined that I could just move all spokes one hole down and correct the problem from Iteration 1. I performed this task on both wheels before realizing I’d gone the wrong way and buggered the whole thing to the point where sending a photo to Oli resulted in the following remark:

Yes, something has gone wrong. There’s no way that you should end up with that situation no matter what rim or instructions you have.

Right, then. Moving on.

Rather than go back round and move the spokes a further two holes the other way, I decided to disassemble the wheels and start over. This didn’t bother me in the least because, as it turns out, building wheels is quite a lot of fun. You start with a pile of floppy spokes and dismembered rim and hub, go through a phase where spokes are poking out every which way, to a moment when suddenly it looks like a wheel and you feel like a genius (until you look more closely and discover you’ve balled the whole thing up). Each time through, I started with the front wheel as it is slightly less complicated owing to the fact that it uses all the same length spokes.

Experienced wheel-builders orient the rim such that the labels are readable when viewed from the right side; not wanting to upset any critical eyes, I naturally took care to follow suit. I also carefully oriented the front hub so that the “R” (Royce’s emblem) was oriented such that it, too, was readable from the right side (in addition to being visible through the valve hole).

Moving on to the rear wheel, I noticed that for some reason, Royce has the “R” inverted so it’s readable from the left side. I let out a slow sigh of resignation as I realized there was no way to avoid rebuilding the front wheel (again) such that the “R” on both hubs faced the same way.

The next day I tensioned the spokes and now the wheels sit in the basement awaiting a pair of tubulars so I can set about mounting them and start riding to ensure that any further lapses in my wheel building skills are discovered now, and not as we enter the Trouée d’Arenberg in April.