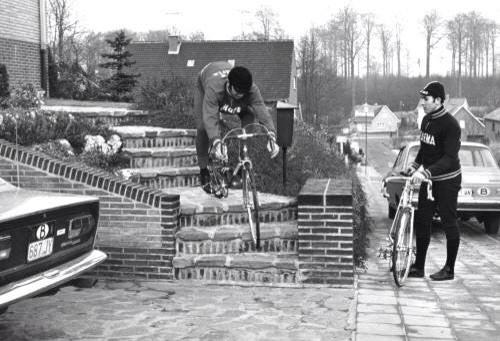 On Rule #43: Shaming the Sensei

I think it would be hard for anyone to make the case that Eddy Merckx was Roger de Vlaeminck’s Cycling Sensei, but I think we can all agree that De Vlaeminck was a student of Merckx, if only a student of his domination. But every student at some point becomes the master, and the driven student will always challenge the Order of Things.

Every rider should keep their bicycles safely inside their warm house during the Winter, on account of us not being savages and not wanting to leave our beloved steeds out in the cold. Rule #69 suggests, then, that if one happens to have a brick front staircase, one should ride one’s bicycle down said stairs rather than waddle down in cleats with bicycle lurched over the shoulder. Such was the case on this snowy Winter’s day, somewhere in Oost Vlaanderen, when the student Roger casually rode his bike down his brick steps while The Prophet waited on the sidewalk to start the ride.

Not only is RdV demonstrating a fundamental property of life (i.e. that shaming your Sensei is an incomparably rewarding experience) but that rivals can be mates. I observe two important points: Roger and Eddy are getting ready for what appears to be a winter training ride and Roger and Eddy are on rival teams. I’ve always been good mates with my competitors; I may well view them as pure evil during an event, but outside that narrow scope, I recognize that they drive me to become a better person, to explore the very limits of my abilities. For that alone, I owe them a debt of gratitude because the quality of my rivals tests the quality of my own character. Most of them are people who share the same motivation and goals as I do. There is no need to hate them in even the remotest realms of reality. We are not soldiers at war; we are foes engaged at a game of Sport – we are more similar than we are different.

Rule #43 is about brother and sisterhood. Save the rivalry for Race Day and learn to know your opponents and spend time with them. You may find they are much like you and have many lessons to offer. But come Race Day, crush them like an ant under the Lone Ranger’s boot.