The Cycle of Style 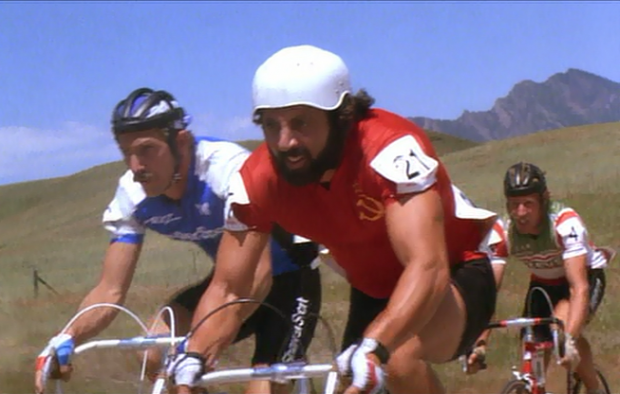 There are two ways in life to be good at something. The first way is the most obvious, which is to actually be good at something. This is harder than it sounds because you need things like skills, talent, fortitude, and light sabers. The other way doesn’t require those things but it has its own challenges; basically, you have to be holistically awful at the sort of levels that make all the suck turn inside out on itself until it becomes awesome. American Flyers did that, and the fashion industry routinely uses this principle to their advantage, regurgitating fads and styles first as kitschy retro cool and then tricking us into thinking it actually looks good.

Cycling has happily been immune to this because our aesthetics were driven by function first through advances in technology; never in our history have we been so advanced that we felt the inclination to revert a step or two simply for the novelty of going backwards. The Velominatus may well be inclined to look to steel frames and three-cross box-section wheelsets for their durability and ride quality, but that is a luxury that we as amateurs enjoy without the demands of racing at the top level of our sport where events are won by fractions of percents gained through marginal advances in technology.

But apparently we’ve reached the stage now where Cycling style is being influenced by kids helmets and skateboard attire. I went for a ride with a good friend a few weeks back who was riding in Giro’s new baggy line of clothing. It flopped around like a sail in the wind generated by our own speed, and basically sent him backwards in the breeze that was blowing in along the coast. It looked good in the café before the ride, I have to admit, but last time I checked, Cycling clothing was supposed to be designed for Looking Fantastic while riding, not while sipping a doppio macchiato. (But let’s not understate the importance of looking good while sipping an espresso. We are not animals.)

And the helmets. There are accounts supported by doctored photographs floating around the internet of me wearing an ugly helmet, something I categorically deny ever happened. Nevertheless, let the record show that the lids the Pros are wearing these days are an abomination of style, culture, aesthetics, and progress. My Aeon is so light that I had to put on a few extra pounds just to make sure it doesn’t carry me off when I go outside. And guess what? It’s actually well-ventilated which means my sweet shades don’t fog up when I climb like the Evade makes them do. (Theoretically, of course. Because those photos are fakes.) And speaking of shades, I’m wearing a pair of Oakleys with photosensitive lenses that go from completely clear to black anodized depending on the light conditions. Also well-ventilated. That’s progress right there.

Riding a bike wearing an ice bucket on your head in baggy shorts and shirts with aviator sunglasses isn’t fashion forward, it’s Cycling – the most aesthetically independent sport in history – taking its cues from kids who think a long skateboard is an effective way to navigate through traffic. There may well be white space in the market for it, but that doesn’t mean it needs to be filled. We are the Velominati and we have standards, for Merckx’s sake.

Oh, and seriously, enough with the fucking beards. Rule #50, people. Sometimes you’ve just got to stand up and say we look like hell and I’m not gonna take it any more!