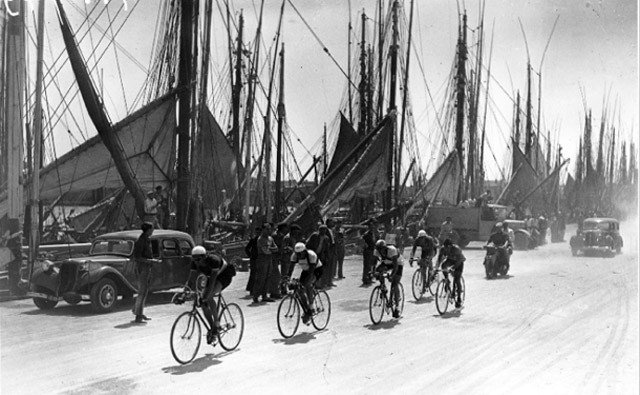 I hate to distract from Marko’s defense of his POC helmet and shades photo but @snowgeek is weaving cycling and sailing together here. It may never have been done before so please read carefully. The two activities have almost nothing in common except the wind and being wet and miserable. @snowgeek is not dwelling on the wet and miserable part.

There is a concept in the sport of sailing called apparent wind.  It is the wind that you and your boat and your sails experience – the sum of the true wind speed and direction and the boat speed and direction (vector sum, for the geeks in the crowd). This is vaguely relevant here, as cycling is commonly employed in explanation of apparent wind to those not familiar with the concept, usually in some form akin to, “When riding your bicycle on a calm day, the apparent wind is from directly ahead and equal to your speed.”

I introduce apparent wind primarily as a subtle diversion, to make a preliminary connection between the sport of sailing and the sport that is the focus (locus?) of Velominati, to soften the blow, as it were. What I really want to discuss is this, there is a term in sailing called VMG. It stands for Velocity Made Good, and refers to the portion of a vessel’s speed (and direction) that gets it and its passengers closer to their destination, (I suppose the remaining speed and direction is velocity made bad?)

(Even the least astute in this crowd will at this point have already done the mental substitution, and inserted into VMG the concept of The V in place of Velocity.)

To continue, sailing vessels use the aerodynamics of sail shape and the hydrodynamics of hull shape to progress forward through the water, the basic details of which often preclude sailing directly toward one’s destination, either because it is directly upwind, or because one could get there more quickly using a faster point of sail (direction relative to the wind).

By example, if one’s destination is directly downwind, but your boat sails faster 120 degrees to the wind instead of directly 180 degrees downwind, it may be faster to get where you are going by not sailing directly there (sailing, like cycling, is an endeavor virtually overflowing with metaphor) – total elapsed time is reduced by sailing a longer, but faster course, whereby VMG is maximized.

By concentrating on maximizing VMG (there are GPS-based computers that calculate this for you in real-time), one is accounting for all the vagaries of wind speed/direction, boat speed/heading, currents, and boat performance on different points of sail.

Enough explanation. Most of you are already well ahead of me here, so let me put it to you bluntly:

When you are laying down The V, how much of it is VMG? Are you at Mach V?

I, for one, being perennially two months from being not too fat to climb, tend to express proficiency in inefficiency even when I am shopping at the Five and Dime. My VMG in most cases is a fraction of what it could be, in stark contrast to the truest displays of mettle which are lore around these parts.

Yet, could we not define all effort expended in pursuit of The V as VMG? I propose that Made Good, in cycling (as opposed to sailing), be defined less in terms of a physical destination as in terms of pursuit of the state of being that is epitomized in LVV – and therefore every effort to make a deposit in the V-Bank is VMG.

33 Replies to “Guest Article: On VMG”