Damned if you do… 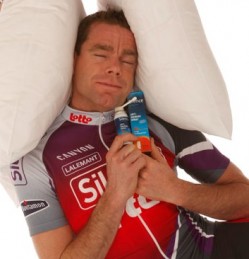 It must be really getting to Cadel. The constant calls from the media and the fans (myself included) to “have a go”. Attack. Stop sucking wheels. And lo and behold, when he does, he gets pummelled from all quarters regardless.

Which isn’t totally unjustified. I mean, had he taken a shot of ‘Landis-juice’ and thought he could ride away from the Tour for 150km, in the hope of making up three minutes? Three cheers for optimism. But did he honestly believe he’d be allowed to enjoy that kind of freedom?

Ok, it was a stupid move. One which was, as he later stated, “a huge waste of energy.” But that doesn’t give other riders the right to carry on like school bullies, does it? Maybe one would expect that sort of thing from Hincapie, but Cancellara and Hushovd? I thought they had more class. Actually, even George should have known better.

So were they right to scream at him? A fellow viewer of the incident asked if I had ever seen anything like it, and the only example that sprang to mind was the infamous Armstrong/Simeoni spat in 04. But that was one big-time rider trying to stop a lesser-light possibly blowing the whistle on systematic doping, while this was a couple of big-time riders worrying that their shot at a stage win was being thwarted by the presence of a bigger-time GC contender.

As far as I remember, this is bike racing. First across the line wins. How you get to that line, well, whatever it takes. But using common sense and tactics surely have to be considered. Maybe Cadel’s energy would have been better utilised to chase Contador on the climb to Arcalis, when some benefit could have been garnered over the other contenders. More likely he just didn’t have it in him, and after copping yet more criticism, reacted in the way he thought best. You can’t blame him for that.

When your team is funded by an anti-snoring product, launching a suicidal attack possibly works against the sponsor’s agenda, but at least it keeps some interest in what has been an otherwise snooze-inducing Tour. Time for bed.