How Dost Thou Annoy Me: Tour Favorites

I wanted to take a moment to talk about my favorite Tour Favorites.  And, the best way of doing that is to go over which of the Favorites annoy me or don’t 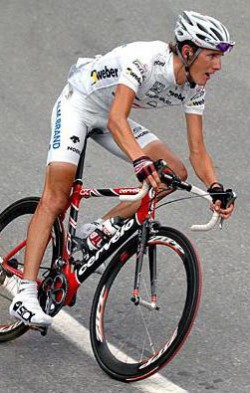 look cool enough or have never raced on Cervelos.  So, onto Frank’s inaugural “How Dost Though Annoy Me” list.

Of anyone hoping for a top 5 finish, this pretty much leaves Kloden and the two Schlecks, who are all pretty cool.  Neither of the two Schlecks have ever done anything other than make The Sound of Awesome and Kloden was the only Telekom rider who publicly voiced his support for Ullrich when he was villainized in 2006 – and he lost his job for it.  That makes him “Aces” in my book.

So here’s to the 2009 Tour.  After Stage 1, I think the Astana leadership is still very unresolved with 4 riders finishing in the top 10.  Furthermore, I am very happy with Kloden’s race and with both the Schlecks.  I am officially putting my hopes on Andy Schleck for Paris.  Vive le Tour!

One Reply to “How Dost Thou Annoy Me: Tour Favorites”