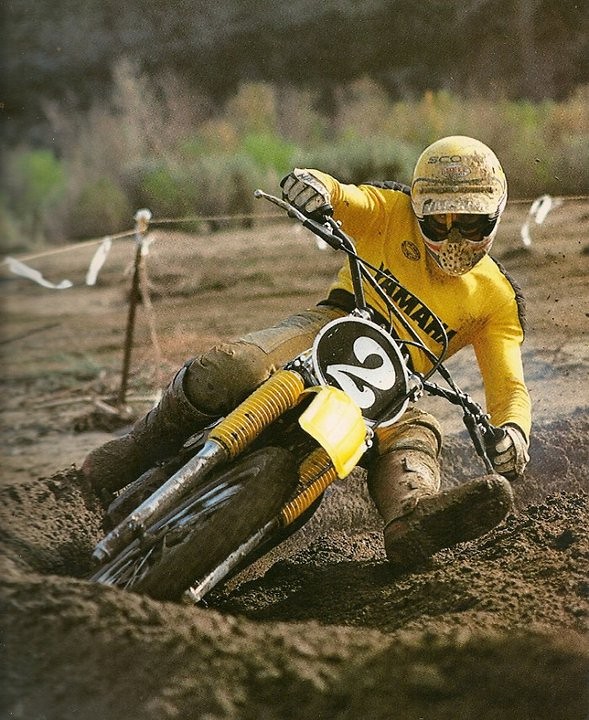 Before Tomac and Ned, before LeMond and Big Mig, there was Bob Hannah. For a young lad obsessed with motorcycles as well as bicycles, the ‘Hurricane’ was the epitome of style on a bike. His bright yellow Yamaha YZs and matching head-to-toe kit set the bar and inspired me to emulate not only his style on the bike, but off it too. If only I could sport those long, flowing blonde locks now…

Motocross in the 70s and 80s was somewhat how mountain biking in the 90s was.  The technology stepped up rapidly, with suspension travel and shock design developments allowing the bikes to corner as well as go like a bat out of hell on the straights. From my first bike, a YZ80B (yellow of course) with its twin coil shocks, drum brakes and steel frame tank to my last one, a Kawasaki KDX250 with Uni-Trak suspension, alloy frame and disc brakes, the difference in performance was more night and day than the 10 or 15 years it actually was. The same could even be said with road bike technology from as recently as the late 90s/early 2000s.

Just as Tomac brought style, flair and function to mountain biking with his fast and flowy riding, skin suits, disc wheels and custom painted helmets, so too did Hannah with plastic boots, body armour and his own range of kit and products. And like Tomac, he could back it up on the track. Every photo in every mag I saw, he just looked fantastic; head always in the perfect position, leg extended in the berms, a bit of turn bar over the jumps. I’d try and ride my YZ and my 20″ Dragster the same way.

Today, there’s a lot of crossover between moto athletes and mountain biking and BMX. The moto helps develop confidence at speed and in the air for most of the top downhillers, and the fitness that comes from pedalling is embraced by many motocross stars. My formative years on two wheels were shaped by a healthy mix of the two, and while I haven’t kicked over a two-stroke for a long time, the skills learned and the parallels between infernal combustion power and legs and lungs still resonates. But mainly it’s just cool to look back at photos of a golden era.

How many here have a moto background, or still ride?