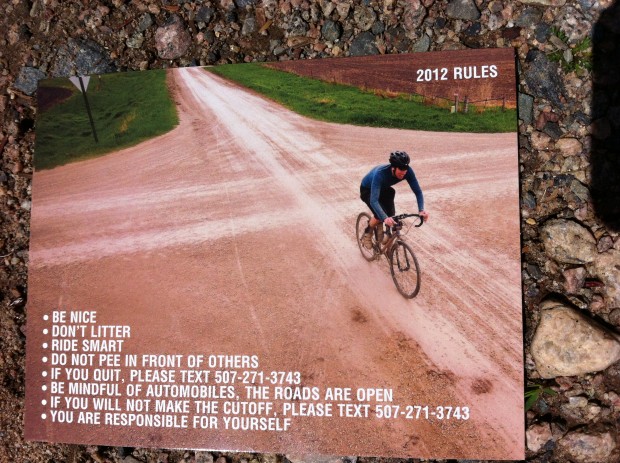 Not being a jackass seems simple enough in spirit but can be difficult to operationalize. Waving to another cyclist because they are on a bike and not ‘the right’ kind of bike reduces your jackassness. But what if that cyclist is clearly riding his daughter’s bike to work because he probably got a third DUI? Taking the time to at least say hello to, if not get to know, everyone in your Tuesday night group ride is another. Especially if you’re the guy who lays the group to waste. The one I struggle with is not escalating tiffs with jackass motorists.

And yet another is living La Vie Velominatus by organizing events, building community, and providing cyclists opportunities to do what they love, en masse, simply because you love it when people ride bikes. Chris Skogen, the organizer of Minnesota’s Almanzo 100, is such a Velominatus. I do not know Chris and only briefly met him and saw him in action this past weekend, but he’s the type of person who exudes stoke for cycling (especially Gravelling) as one of the ambassadors of the Midwest’s gravel scene. Along with the other organizers of the Ragnarok 105 and Heck of the North, Skogen, the lead on the Almanzo 100, Royal 162, and Gentleman’s Ride, is a key figure in an extraordinary series of races.

This year was my fist entry into the Almanzo. One thing that sets it apart from the Heck of the North is that entry is not limited by numbers of riders. It seems anybody who signs up via postcard between the specified dates gets a slot, whereas the Heck is limited by lottery. Planning and budgeting for this must be a challenge as the race is totally free. Yes, read it again, free. Free stuff is good but when stuff is free expectations have nowhere to go but up. What Skogen offers in terms of support, SWAG, and hospitality could easily come at a premium and often does at races. He has done a fantastic job garnering sponsors and community supporters who all make the racers feel welcomed and appreciated. I can only hope that other riders expressed their gratitude to the locals as well.

I’ll spare you a race/ride report. Instead, I’ll try to provide you with a sense of the place the race occurs. Imagine the farm fields of Flanders periodically dipping down into numerous pastoral river valleys. Add to that the white gravel roads of Tuscany raced over in Il Strada Bianche and you’re pretty much there. These are not intermittent sectors of gravel but a continuous network of crushed limestone endemic to the area that intertwine for what must be thousands of miles. Over the course of the race I’d estimate not more than 10k were ridden on tarmac. The deep little river valleys are beautiful and thrilling places to descend into and provide really challenging climbs as they peter out onto gently rolling farmland above. This is especially true given the loose gravel. Comfort climbing in the saddle is a prerequisite to prevent tire slippage. Furthermore, the rolling farm land was no respite from the steep little climbs on race day as the wind was blowing at a sustained 40kph and gusting to 55. I was pushing the 34-17 on my ALAN to go downhill at times and nearly blown over or off the road several times.

The gravel is loose and deep compared to the more compacted gravel I’m used to in the northern part of the state. This early in the season it has also been freshly graded and added to by the local municipalities after a punishing winter. I had arrived the night before the race with my lucky Open Pave’s from the Keepers Tour mounted to my cross bike. After the pre-race Spaghetti feed I decided to recon some of the local gravel. Thankfully I’d thrown my Michelin CX-Jet tires in at the last minute as skinny road tires were much less than confidence inspiring. Descending these roads at 50+ and cornering would be downright sketchy so I hurried to remount my “fatties” before dark. I heard several first time riders who’d ridden road tires after the race comment that they wouldn’t be doing that again.

But back to not being a Jackass. In addition to an extremely well organized and SWAG’d-out event, Skogen seemed to be everywhere. He greeted everyone at the door of the spaghetti feed, welcomed each rider to the start line (before leading the entire field in a chorus of Happy Birthday to his 6-year old son, Jack), was seen at numerous places on the course encouraging riders, and welcomed each of us to the finish line with a handshake and a smile. His countless army of red-shirted volunteers were warm of heart and always smiling. He commented to me before the start that he felt terribly that he’d only rented three porta-potties as we looked at the line of 50 or so waiting to relieve themselves pre-race. I laughed and said I’d just come from the line and heard nothing but easy banter and a laid-back aesthete. He walked over and apologized to everyone in line anyways. It was apparent to me that the Almanzo is truly a labor of love for Chris and he approached it and the riders with kindness and humility.

There are so many things that we can step back and say cycling is about. The Bike, Rule #5, tradition, culture, the list goes on.The Almanzo covers all these bases handily. I ‘d posit that perhaps, though, it is really about Rule #43. If we really want people to enjoy riding bikes let’s not start by telling them to Harden the Fuck Up, shave their guns, or remove that fugly YJA. They will choose that path for themselves in due time. Let’s start by not being a jackass. If being kind is too much for you, you can at least not be a jackass. We could stand to take a lesson from Chris Skogen and welcome all comers – hard or soft, shaved or hairy. We’re not telling you to go out and create a badass race requiring heaps of Rule #5 that attracts some pretty strong riders on cool-ass bikes. We’re just saying that however you engage with cycling – including on this site – don’t be a jackass.

Here’s a link to some great photos of the race.

I Strava’d my ride but my phone battery shit the bed at Km 118. Have a look if you care to here.