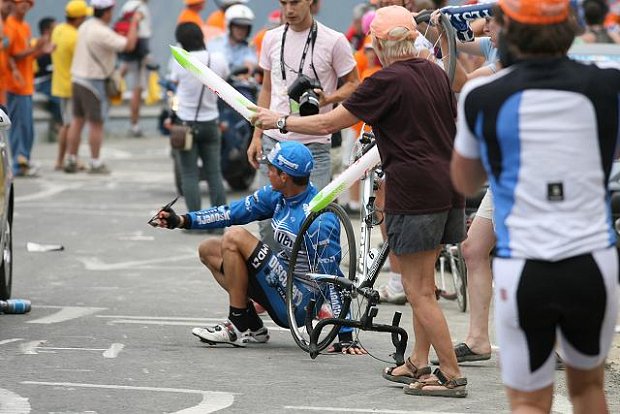 This is the tale of the day I caused Paolo Savoldelli to crash out of the Tour de France. It happened in a flash, and the details are fading into the cobwebs of my horrible memory; if you're interested, you can read a more detailed account in my original post on the subject.

Our trip to the Tour in 2006 was no less memorable than the trip to Alpe d'Huez in 2003 and in some ways more so. Instead of heading to the Alps, we went down to Pla-de-Beret in Spain to watch the race on its first major mountain stage.  It was a very different experience as a spectator than the ones we had in France. The Spainish were more poorly organized than the French were, but at the same time, were trying to rule the crowd with an iron fist (a police officer threatened to arrest us for parking in a parking lot). What resulted was a much less spirited and lighthearted atmosphere and much more gesturing towards officers with their backs turned. But still lots of fun, of course, because after all – it's still the Tour de France.

The race passed with it's usual procession: the caravan, the racers, the team cars. Then came the groupetto. This was 2006, and my boy Tomeke was riding in the Rainbow stripes as world champ. The problem was, I was on the wrong side of the road to appropriately photograph him (I have very exacting standards). Being a man of action (and focused on the race coming up the mountain), I jumped across the road just in time to set up for my shot. It felt a bit like being a super hero or a Jedi; the speed with which I moved was incredible.  So too, unfortunately, was the speed of Paolo Savoldelli as he was descending the wrong way back down the the climb – while the race was still going on.

He plowed into me like a crash test car into a brick wall. Lucky for me, I'm a big fat Dutchman. Unlucky for him, he was a skinny Italian pro with no helmet. Blood pouring off his face, he screamed at me what I can only assume was a stream of curses, sprayed his eye with water, jumped on his bike and rode off.

The next day, we were back at home base in Aspet and watched the race as it passed through town in the early parts of the stage. Paolo was off the back already with a big wad of gauze over his eye. He dropped out later that day. His contract was not renewed, and he retired after a few years of anonymity in smaller teams. I, on the other hand, continue to suffer from the effects of the dislocated shoulder as a result of the collision. But only when I strain it during the odd ass-kicking I dish out on hippie fixie douches.

Strangers in Paradise- CycleVentoux to The Rescue