The 2011 V Moment of the Year: Paris Roubaix 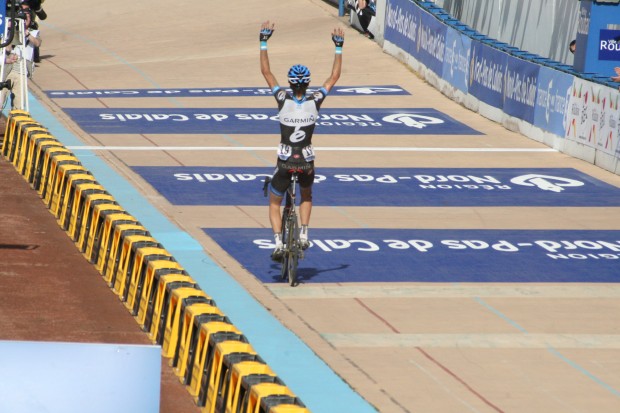 The V Moment of the Year isn’t an award so much as acknowledgment of the moment during the season when the sport demonstrated the most pure example of spirit of The V. This is more than pushing hard en route to glory; the V Moment is the one point in time at which, despite a rider’s body and mind screaming to sit up in acquiescence, they instead fight on in the face of almost certain defeat.

In the first season in recent memory during which, despite some solid efforts, the story of The Needle and Blood Bank took a backseat to the story of Good Bike Racing, I am glad to report that fists were slammed on the Velominati boardroom table in defence of the many moments deserving this honor. The season saw both the domestique and the star take highest honors in the big races: a Dutchman returned to his machine after being torn to shreds on a barbed-wire fence; an Australian took the first Tour de France for the Antipodes; a Walloon took an astonishing quantity of quality races using the same tactic time and again from the season’s start to end; two riders stood out as the only big names willing to gamble on (and lose) a Merckxian long-distance charge rather than on a last-minute dash. In a season such as this, a unanimous vote was impossible and even as some V-Pints clinked in agreement, ale spilled from others at they were shaken in dissention. Bretto was last seen staggering off to the loo muttering, “Cadel [indecipherable] Galibier [censored]…” That was two weeks ago. I do hope he’s alright.

It’s a classic racing tactic; send a teammate up the road and force the other teams to work to bring back the break while you sit on, sip tea, and nibble on biscuits. In Professional Cycling, nine times out of ten, the break is brought back at the decisive moment of the race and the favorites are let off the leash to play out the finale while the lambs who have sacrificed their day toiling for another’s glory are left to limp to the finish largely forgotten.

Johan Van Summeren is one such rider, usually racing in the service of his team captains. Off to the front with you, Johan – time to bring the break back. Johan, the break has two minutes – you’d better bridge up there solo and get the other teams to chase. Hey, Johan – you don’t climb anywhere near well enough for your weight, why don’t you make sure the break that gets away before the mountains doesn’t get too much time – then beat the time limit over the cols.

Despite his role as loyal domestique, he showed promise on the brutal Pavé du Nord; in the service of Leif Hoste, he finished 10th in 2008 and in 2009 he placed 5th even after stopping and waiting for his fallen captain. And so it was to be again in 2011, though this time for a new captain – World Champion, Thor Hushovd.

The Sector of Pavé known as the Carrefour de L’Arbre is perhaps the most decisive of the race. Though it starts flat, it ends on a slight uphill stretch which makes the particularly brutal stones feel even more antagonizing. As they approached, Van Summeren was told by his team leadership that should the break not yet be caught when they enter the sector, he would be given free reign to ride for himself. They came within 11 seconds of being brought back before they began to pull away again. Sensing his chance, Van Summeren hit the Carrefour sector on the front of his group, put it in the big ring, and rode away from his companions.

His gap never seemed big enough, but he continued to fight even as he felt the favorites’ breath on his back as they overtook the remnants of his group. The story might end there, speaking of a domestique leaving the favorites at the Trouée d’Arenberg to stay away until the finish, and a good story it would be. The underdog had taken his chance and  looked to have gotten away with it when the unthinkable happened. My bike feels slower than it did a minute ago – is my brake rubbing? Aren’t the last sectors of cobbles easier than the previous ones? Then why are they so rough? Indeed, the air was popping out of his back tire for a rest; yet he still managed to hold off a late-race charge from pre-race favorite and reigning World Time Trial Champion, Fabian Cancellara. Into the finish and over the line, he sought not the reporters of the press, but his girlfriend to whom he promptly proposed. (“Most people give a ring, I give a rock.”)

For taking a chance almost 100 kilometers from the line in the hardest race on the calendar, and for holding off the fastest rider in the world while rattling over the roughest road in Europe on a flat tire, Johan van Summeren gave us the V Moment of the Year at Paris-Roubaix. Goed gedaan, meneer.