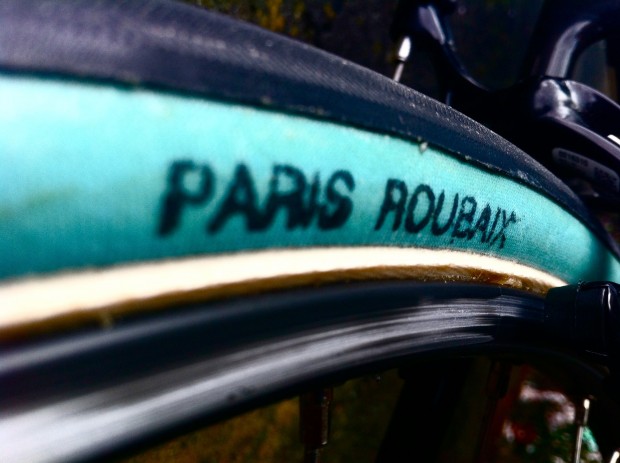 As Keepers Tour crossed from dream to reality and routes over the cobblestones of Northern Europe were sketched out, with it came the familiar tingling in my fingertips and uneasy sensation at the base of my spine as my mind starts its irrevocable journey towards categorizing as mandatory an unnecessary indulgence. I was going to need a wheelset and tubular tires that were up to the job.

The folklore goes a long way towards that justification; Paris-Roubaix is the race where every trick of the trade is exploited to deliver riders safely to the finish. Equipment which usually carries riders for a season or more finds itself in the trash heap after a single day on in Hell – maybe good enough for training but certainly not be trusted for another race. Special wheels are built, and only the strongest tubulars are glued to the rims. Aldo Gios, De Vlaeminck’s mechanic, is said to have aged his tires in his wine cellar to allow the rubber to harden, making them more resistent to punctures.

Ignoring the possibility that there may be some difference in strength, speed, or skill with which the Pros ride over the Cobbles, it didn’t take me long to determine that it wasn’t so much a matter of wanting a set of tubulars for Keepers Tour, but that it was indeed my obligation. I have a responsibility, after all, to the attendees of trip that I not fall off my machine and bash my head open on a cobblestone. Messy, certainly, but it may also frame the event in a somewhat negative light, and I think we’d all like the opportunity to do this again some time. The only way to assure I don’t suffer some catastrophic equipment failure and jeopardize the trip was to build a set of wheels based on the same components the Pros select for the purpose, and line them in the same rubber they choose. Logical, really.

The seduction of symbols was the first phase, followed quickly by the art of building wheels. The final step was to procure the right tires for the job. FMB is perhaps the most revered name in hand-made tubular tires; inspection of photos of Roubaix will reveal the pale yellow or green sidewalls of the FMB Paris-Roubaix tire on many of the wheels bouncing over the cobbles – often rebadged on order to satisfy sponsorship obligations.

I needed a set, naturally.

The tires were ordered in December, as from January onward Francois (of Francois-Marie Boyaux from which FMB takes its name) becomes overburdened with orders from the teams riding Roubaix and indicated he wouldn’t have time to squeeze in an order from a nobody such as myself. They arrived in February, at which point they displaced a few bottles of wine to age in the darkest corner of our basement which doubles as our wine cellar. Having mounted another set of tubs on the wheels in order to bash the bejezus out of the wheels so as to make myself a little less certain that I buggered the wheel building process, they had to wait until this past week to be mounted.

They have not yet been ridden, but they certainly look the business.

Gluing on a tubular tire is a glorious study in patience and settles beautifully in the intersection between art, science, and ritual. And the glue smells distressingly fantastic.