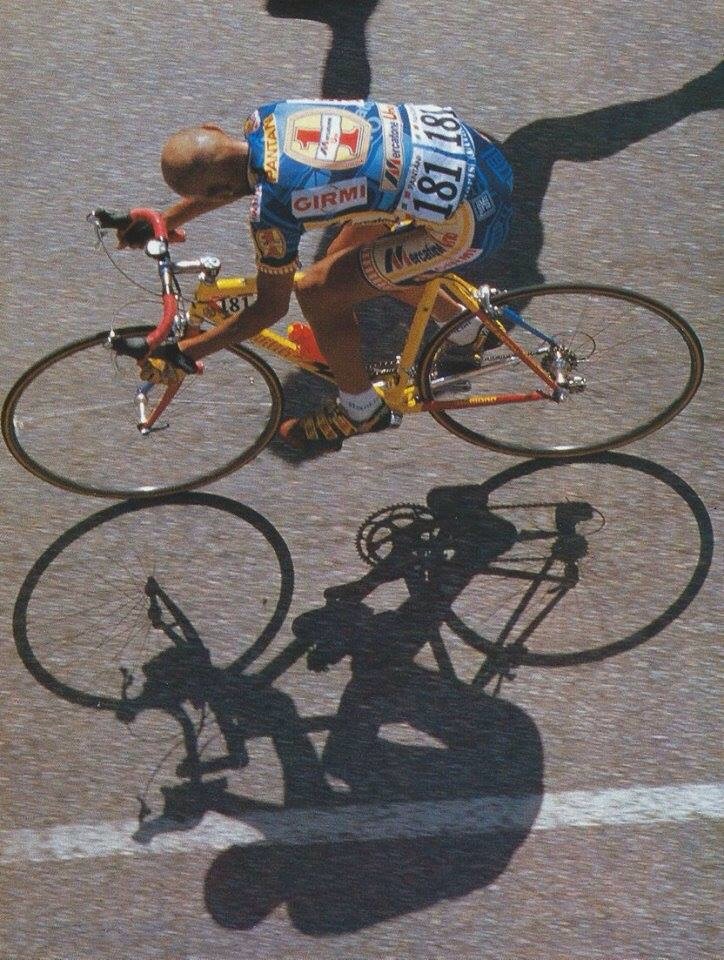 In the 1989 Tour de France, Laurent Fignon was on the rivet. Close to collapse. But his Directeur Sportif noticed that Greg LeMond’s shoulders were rocking; he knew from the time he spent coaching Greg that this was the telltale sign of his imminent collapse. He ordered Fignon to attack, and he took the Yellow Jersey. He could read the signs that no one else saw and took advantage. I would be willing to bet that LeMond himself was not even as attuned to his condition at that moment because it is so very hard to gauge your own sensations when you’re Fucked with a capital Fucked.

I ride with my shadow more than anyone else, with the possible exception of my reflection who comes out any time my shadow retreats to the clouds and the rain falls down to provide the Flemish Mirror. (Which is arguably more often than not, given my residence in the Pacific Northwest.)

Through this, I have come to learn that my shadow whispers to me; it lays bare all the secrets I have not yet discovered about myself and allows me to see what is internally unseeable.

A Velominatus must learn to read their shadow; to the untrained eye it hobbles about in distorted patterns that reveal nothing but awkward manipulations. We can, however, learn to extract from that amorphic blackness the telltale signs of everything from our level of fitness, our weight, or even whether we are about to bonk.

I watch my shadow for signs of how I am pedaling. Is the rhythm I feel in my legs mirrored by the inflection of myself on the road beneath me? Do I feel smooth but the stroke in my shadow ragged, or do I feel ragged but still my shadow is smooth? One is a manifestation of reality, the other is a manifestation of perception. When I feel as bad as the shadow looks, I know the Man with the Hammer lurks nearby.

I can gauge my condition based on how my shadow looks. Are my shoulders thin and sharp in my shadow, or are they a bit rounded? The first sign that I am putting on weight is when the shadow reveals a roundness that the mirror and the scale does not reflect.

Today, there was an ease to my shadow that coaxed me on to drive harder; it was almost half-wheeling me, teasing me into putting another dose of V into the pedals. Today, the shadow came up wanting. Tomorrow is another day. Tomorrow, the shadow will reveal new secrets.